We Should Have Bought a Cow

Yes, we should have bought a cow - or at least a goat. If we'd known 2020 would be the year of Corona....Michael looked for milk when out for his doctor's appointment and found none. Today, we didn't find any at Fred Meyers or Carrs....but we found Cascarones! We've not seen any of these outside of Texas. 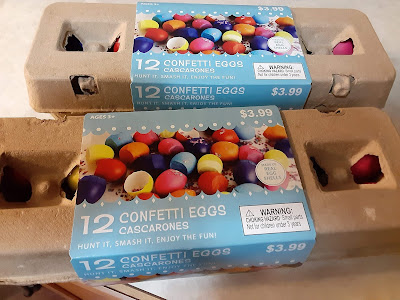 The confetti would litter the parks like snow the day after Easter. I envision a giant hunt and party here on Easter, but I know it's not likely...ah well...G Dog is going to think I've gone crazy when I bash an egg over his head on Easter.

How are we doing on those "Quarantine" Goals?  BLUF (Bottom Line Up Front)

My first time outside in 3 days. I am VERY happy to be feeling better. I drove into town to pick up Alex from work - because fast food is still considered essential. 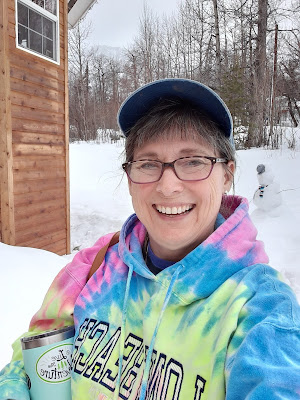 True love - a shoveled pathway to my van's door. Some of you may remember during the cold snap and BIG snow storm we got enough snow to block our back door...snow is now sliding off our roof and landing right here too. We actually have no passage between the red chicken coop and the house. Just a wall of snow. Michael spent 5 hours a couple of days ago moving snow- while I was sick and the boys were working. He unearthed our trash pile....today, I joined him. The goal is to unearth the rest of the trash and more of the house. 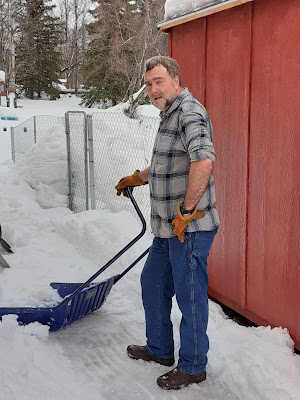 Michael suggested I clear a path to the back door...first he mentioned moving all the snow away from the sides of the house to avoid water in the house during the melt. This was simply too much of a goal for me. I tackled the door. 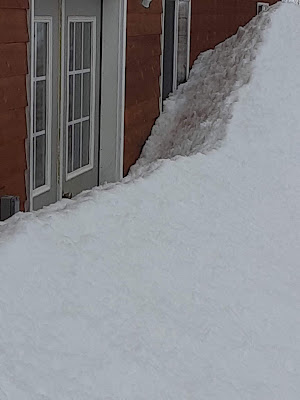 I was OVER-joyed when Alex came out to join the fun. We miss having him here to help keep up with snow moving. He chose the weakest spot on the wall and joined me. 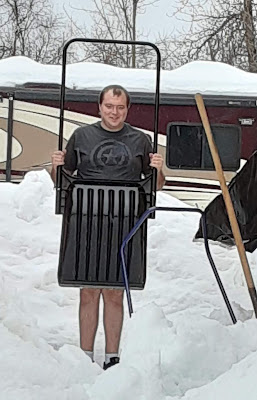 We worked about 40 minutes and were within reach of the door. 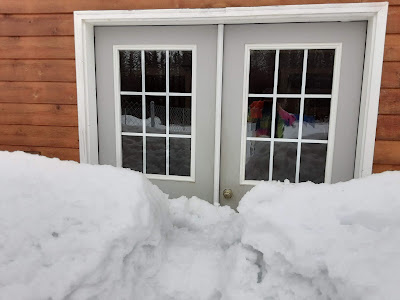 The girls came to assist. Out the door they came it was suddenly very doable. We had a work party! 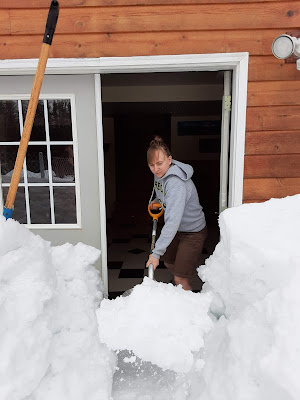 We loaded the snow into a sled and shovels and drug it back to the garden area...which is always a swamp during break up. I don't have to water much with the lay of our land. 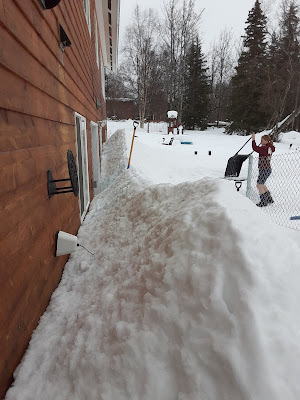 Michael did great on his part of the wall....trashcans uncovered, snow moved to the drop off behind the RV.  He's a beast. 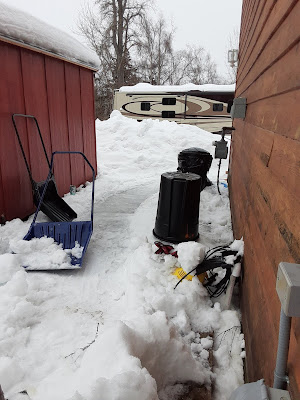 Last year we cleared the chicken yard...they seem to be wondering why no one is enlarging their snow-free space....Last summer Michael built them a covered area and he deemed getting the mountain of snow away from the side of the house is more of a priority this year. 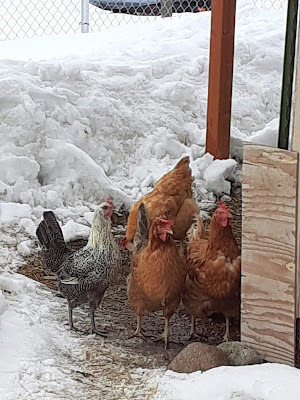 Yes, the kids haul snow in shorts! Why? 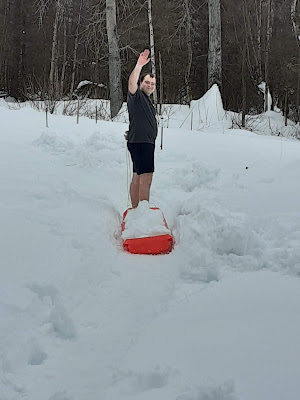 The kids and I reached the door....Michael had been loading trash into the back of the truck. The landfill and recycling ARE open. He and I headed off to dump....keeping at least 6 feet from all people and never being in a group of more than 10. 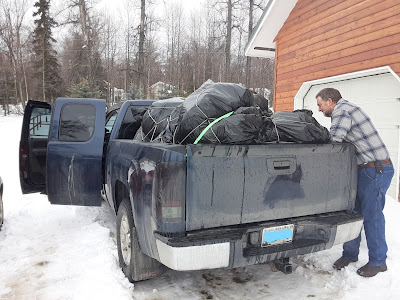 When we came home the kids had finished up to the first window...working their way towards Michael. 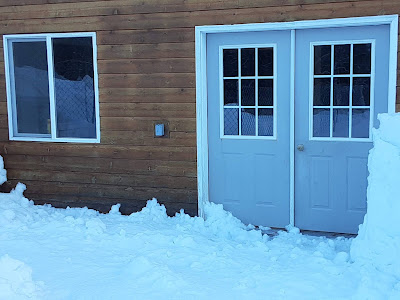 Josiah jokes he will survive on pancakes and salmon if he can't make it to the store when they are open. He's working long hours just now!  I found a big bag of pancake mix left from "fish camp." I am concerned about my flour and milk stock...but made pancakes for breakfast.....and as we worked outside I remembered Michael has been asking for Salmon chowder...a dinner request I filled.... Pancakes and salmon. We shall survive.

I wanted a photo of this odd shaped potato from the garden....and  I captured the potato, eggs and salmon - all stuff we grew, raised or caught. 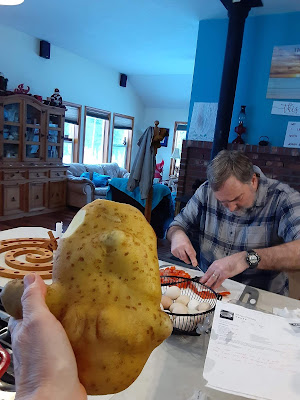 Michael was sweet to filet the salmon for the chowder, making this the first time I've made chowder without the assistance of band-aids. 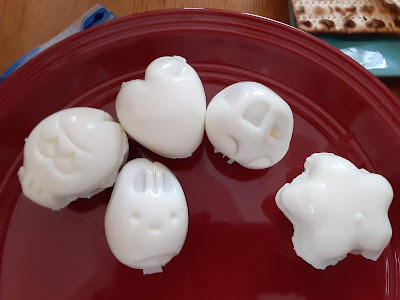 After dinner we checked out Zoom. I'm gearing up to use it this week for women's ministry and need to figure out how it works!
G Dog went to bed early. We watched some funny YouTube clips and everyone headed off to their rooms.

As I sat down to blog late last night....this popped on my screen. 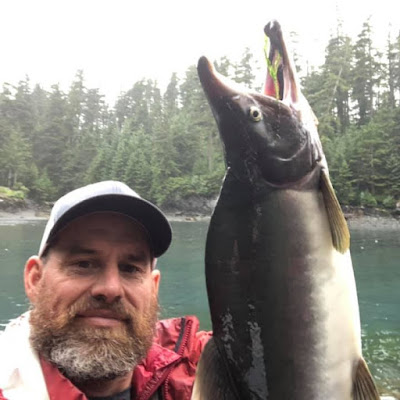 Fun memories of a Nate and Heather's summer visit. They are currently in Kazakhstan. He is "teaching from home" and  even his introverted self was ready for a bit of social interaction. ::wink:: I'll read much of our chat to G Dog this a.m. It will make him smile. I offered to stock the RV with food, and let he and Heather hole up for 14 days inside of it...::snort:: They are well in Kstan and it was good to hear from him.

Another good day in "quarantine." We rested, read, worked towards goals, and connected with family we aren't physically able to be near just now.