Minimalizing (Yes, it's a word - I checked.)

While we readily admit there are many details up in the air at this point in our saga, one thing is sure, we will be moving out of our home in 5 - 6 weeks.

We are going through our house with an eye to 1. donate or give to the kids, 2. store or 3. take into
the trailer.  The Store/Give decisions are a bit tricky. We want some basics when/if  we decide to settle down somewhere in America. That could be in a  year or two or 10 - 15 years down the road. It will depend on if we end up being able to go to Japan. Obviously - storing a couch for 15 years is hardly worth it. Storing sentimental things for 15 years is necessary.  If we are not allowed to go overseas and need to set up a home in a year or so - we'll want to have basic furniture. We are keeping more than we originally thought to keep. Our goal is  "basic furniture to outfit a home." In order to be good stewards, we'll also keep "expensive tools" of housekeeping. I think Michael will be keeping way more "expensive tools" than I am, but I have the same option.   It sort of looks like this - we'll keep one couch and get rid of the other couch, the futon and the two recliners.  We won't keep major appliances. We'll get rid of plates, mixing bowls and baking sheets (taking our favorite essentials to the trailer), but we'll keep the Bosch mixer and the grain grinder.

We aren't going to have a garage sale. We love to bless people as we move and God has always taken care of us in a new location. I've created a  photo album of things for elder Gherkins to decide if they want. I may open it up in a bit to anyone local who wants to come get things. What friends don't take - we'll donate. We'll probably figure out how to post a few big items if no one wants them. 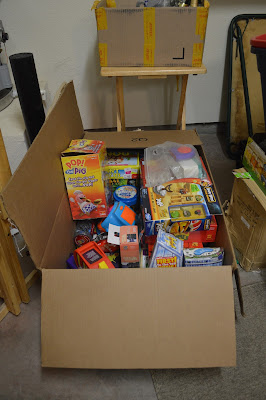 We spent the day continuing on in the process  the kids and I had started earlier.  Do games MULITIPLY in anyone else's home? We got rid of a LOT of games when we left TX for Japan. We did the same when we left Japan.  The huge box above (the perspective is off) are games the kids decided we could donate.  Below are two more boxes of "educational games" looking for new homes. 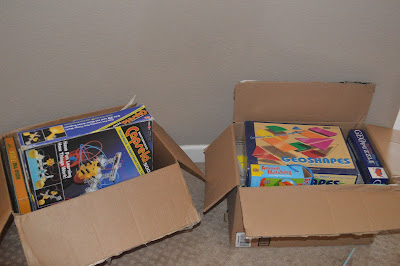 You would be wrong to assume these actions make our children game deprived.  Oh.so.wrong.
﻿


WHAT? Another stash of games. Nolan's games - um not sure what the plan is with these. I've heard  some will be stored with Arielle with the understanding he gets them back when he leaves home/trailer.  He may line his bed with games and put a mattress on top. ::snort:: 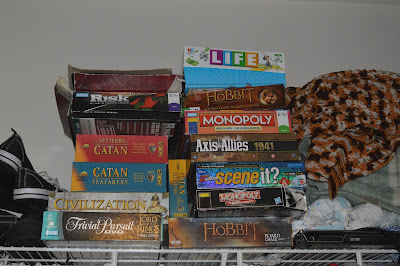 We all went through our closets. Our first goal was to remove things which don't fit, are stained or not worn. We will have to do another pass through to decide which 7 - 10 outfits make it into the trailer and I would guess 98% of the rest will be donated.

At some point in the day I got a bit miffed at a popular Christian author who teaches about getting rid of excess and minimalizing - while living in a big house. This minimalizing is HARD if you take it seriously. LOL  I have no clue how I'll decide which pair or two will go into the trailer. 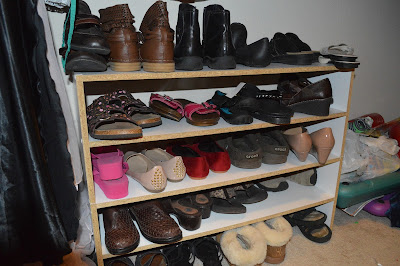 I nearly cried when I opened a closet and found this....the old SLR....and rolls of undeveloped film. Which reminded me I have tubs and tubs of photos to scrapbook.....ACK I also found four camera bags and a Nikon D70....decisions ahead. 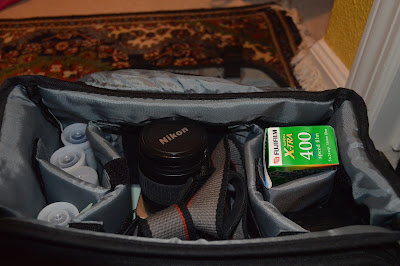 I found THESE  - which reminded me I've not made up monthly staff baskets for a year. ::blush:: I've decided they'll make great retirement ceremony decorations. 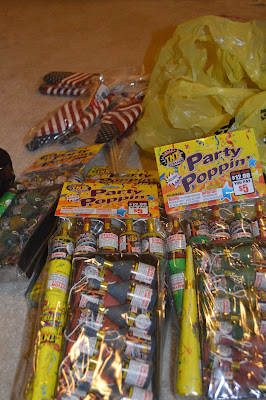 It would appear "spouse B" purchased this while "spouse A" was in Afghanistan. It WAS the highlight of my day when sand from Momoishi beach fell on my toes.  Once Michael realized it's UV shade for the beach and we loved it and bought it in Japan - he decided it needed to go into the trailer and could be useful at the beach here. 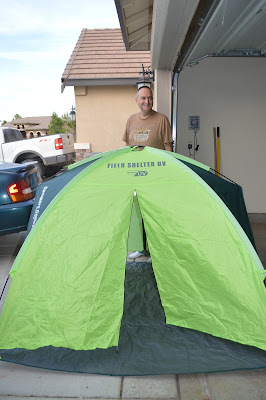 We put this up to make sure all the pieces are there - two room tent.....It will find a new home with one of the Gherkins - or maybe someone local would like it. We have another 3 room tent which folds into a smaller package for the trailer. 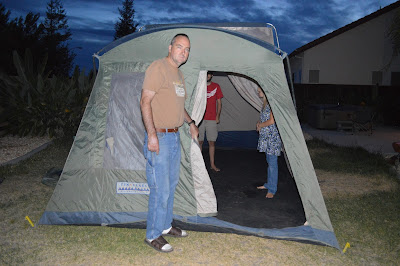 People kept finding Applebee cards. ::snort:: That and about 50 Starbuck cards.  Arielle wasn't feeling well and stayed home. The rest of us went out for dinner.  $4  dinner. SCORE! 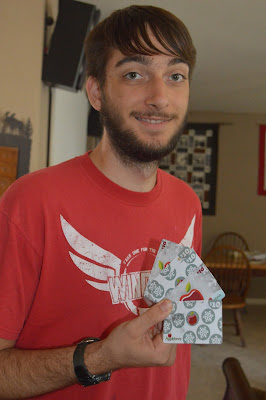 Michael will start leave on Wed. We were scheduled to fly to Japan. Instead, we'll work heartily.  The kids and I need to tackle the homeschool room - I'm at a loss!!!!!
I also have a couple of projects that will make storage easier. 1. I want to make a t-shirt quilt with favorites t-shirts, and  2. Get all those photos into an album somehow. I'm fully digital now but don't want to lose these....or I may just put the boxes in storage and work on it when I'm 70 or 80 and life has maybe slowed down.
As so many of you commented (on FB) how you appreciated specific prayer requests - here are a few more.
Praise:
Prayer Requests: