I know some of you worry when I miss blogging for a day....so there you have it.
Tuesday - we finished up our study of Ephesians. I need to write a review of these materials. I'm totally happy with them for use in PWOC. I downloaded a new study for us to do for the next 5 weeks, as the books we've ordered aren't in. We'll begin next fall with Proverbs. Flexibility is the key to a stress-free life. ::snort::
I completed our United Food co-op order.
I began to dialog with a group about a new endeavor.
Wednesday - ran most of the day. I was at the base early to sponsor a group on to the Holocaust Remembrance. WOW - this is moving each year. You can read more about my thoughts from last year here. I have another list of authors and books to read. I got a work out in after the remembrance.
I put in our Produce co-op order.
I finished reading, "A Mending at the Edge" and will review it and give a couple of copies of it away "soon". What a timely book to be reading considering the big news here in W. TX.
Today - Early a.m. workout. I drove the boys across town for their ministry op. I continued to try to learn things like feedburners, animated headlines et al.
I did a bit more in our new Bible study. I'm unsure......
I kept busy with bookwork and email things. I tried to add that feedburner thing, but it doesn't look like it does on all y'alls blogs. I'm not sure what it's supposed to do - but I DID it. All alone. ::snort::
I began reading "Do the Hard Things" and yes - I'll post that review and a giveaway on Monday.
This is just a crazy week, and tomorrow night is a PWOC Project night. WHY are some weeks like this? I've not done couch school more than once all week.
Josiah just got home from the Holocaust Remembrance at the University. He got to hear the gentleman that I've heard is excellent. Josiah said it was packed. I heard that Walter began his talk on base by saying, "I believe in heaven. I've seen hell". Walter talks about being 12 - 17 in the Warsaw Ghetto and then being in a concentration camp. He talks about sick, sad, things he witnessed, his brother dying in his arms...the death march at the end of the war, the Russians taking all he had....it's powerful. He ended by saying, "Now, I'm an American, and once again, I'm human." It is HARD to describe the emotions I've felt each time I've gone. SHAME that America had the information and did nothing to intervene, that we turned refugees away...PRIDE that we offered a new home and a safe haven to heal to so many after the war....horror and incredible sadness that humans can do this to each other.....and a call to intercession for those countries where genocide is still happening today.

Have you ever had a child say something that totally flummoxed you? I have no IDEA where Stacia got this idea.

She walked in like this and said, "I'm a priest". I thought maybe she meant princess or something, but she was adamant....she was a priest and this was proper attire. We have lots of friends who are priests.  The only one she knows is Father Jim and to the best of my knowledge he's never worn a hat of any sort..... Who knows?

I bought myself a month by saying that I was going to celebrate according to the Jewish calendar and now it's time for me to figure out what we are going to do.


I have some great women in my life. God blesses me well. Sherri loaned me a book on Jewish Holidays - thanks. I read it and was calmed. I'm starting to get a handle on the huge amount of information coming my way, and we are going to relax, enjoy this, and hey....get it wrong....I'm sure.. 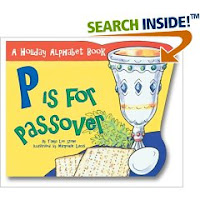 .but we'll get it right as we go along year after year. LOL

THEN in the mail I got two books from a dear sis in AK......Can you believe it? FROM ALASKA SHE MAILED THEM TO ME BECAUSE SHE KNEW THEY'D BE GREAT FOR THE KIDS WHEN SHE SAW THEM!!! They are exactly what I needed to help bring Passover down to the level of our youngest two/three.
I think she got them from Scholastic, and they are just what I needed. Great picture type books for me to read WITH the little ones so they begin to get a picture of what we are about to do. The first one is titled, "P is for Passover" by Tanya Lee Stone. It's an alphabet book. Each letter quickly discusses, illustrates, and describes an element of Passover.

The next book Darshia sent is "The Passover Seder" by Emily Sper. This is a touch, turn, open, and learn Scholastic book. It's darling. It has Israelites who you move across the dry Red Sea, a seder plate that turns, a cup that drips wine for each plague, herbs to touch....


A few examples: A haggadah (order of service) that you can open. I tried several times to open it from the wrong side. ::snort::

There's a "cloth" that you lift to discover matzah beneath.

Then you can BREAK the matzah.

Another book that I pulled off the shelf to use is a Tapestry of Grace selection, "Walk with Y'shua Through the Jewish Year", published by Jews for Jesus. They explain the tradition, give you a brief Scripture tie-in, a couple of crafts and a recipe or two.

I've been spending some time trying to work out the details of our first Seder. The toughest part is finding a night that all will be HOME.....I've read that some observant Jews celebrate the Seder for 7 nights....so if I can hit one night somewhere around the right time....or we may have to do this without the older two boys....but I'd hate that. I think that the celebration will make big connections for adults and older ones......and I don't want them to miss it.