Jamin flew in Thursday night. We had Mom G's service and a family reception on Friday. Saturday we said goodbye to kids, and picked up Jamin. We spent the day with friends from Japan.

This morning Michael and I took Jamin to the airport for what was supposed to be an early Spirit flight. The flight was delayed; Jamin did not throw a temper tantrum.

We opted for one more night at Buckley so that we could do laundry, buy groceries - all the details to prepare for our return road trip. I spent three hours doing laundry. As there was no water at our site and we were busy, the laundry had piled up. Did I mention the laundry was FREE at the fam camp?

The younger three kids have passports that expire in 5 years. We finally realized they would NEED them to move to Alaska as we will be driving through Canada.  We hoped the extra day and a half in Denver would allow us to get the renewal applications quickly. We secured passport photos for each child. We were unable to get anything done at the Denver processing center as they require proof of international travel to use their quick turn-around services.

On the way to Walgreens for photos - we saw this. We were excited. Psyche! It was Sunday. 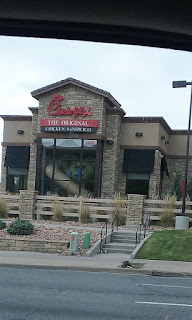 Michael took Nimo to be washed and filled up gas. Stacia and I headed to the BX and the Commissary. We got a new id tag for Yuuki with our current phone numbers on it. As we shopped, I saw a woman I knew I knew.....but we were in Denver. That would be odd. Turns out it was Jeannie - and I knew her from CWOC/PWOC. I recognized her face. She heard my voice and was thinking, "I know that voice." ::snort:: 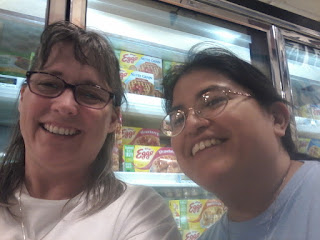 The disappointment at not having Chick Fil A was eased when I found Siopao at the commissary! I love shopping in commissaries - Asian foods I love. ANYWAY - I fell in love with Siopao in the Philippines and introduced the kids to them in Japan. I've never learned to make them. Steamed buns filled with pork. PORK. I know. I've not had meat in 4 years. I broke the fast. I'm already crawling back onto the wagon....but it was GOOD. 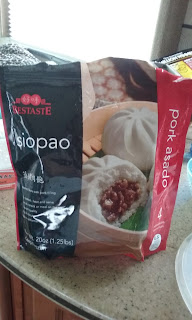 Nothing better than one of these freshly steamed from the Circle K on a blustery, snowy day in Northern Japan. LOL