The Leaves are Gone

The colors this year have been great! FALL is beautiful.  However, for the past two days the wind has been blowing hard and steady. We can see snow coming down the mountain...it's now at tree line. 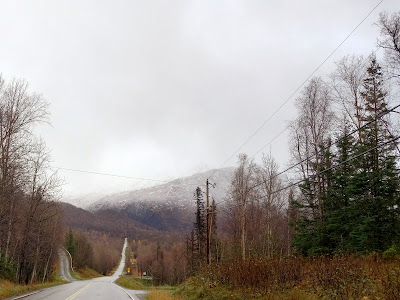 This little ridge we see from our windows is always the last to get any snow...and it has snow down the face of the side now. 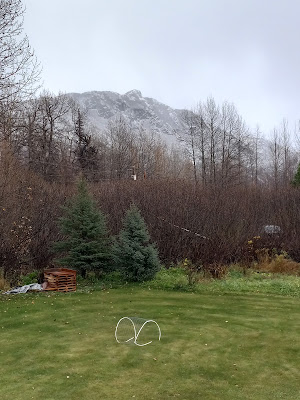 The leaves have all blown away. In the past years we've noted a big wind storm which blows away the leaves and the first snow a day or two afterwards. This seems EARLY...but it does seem to be following the pattern. The leaves are all gone.  We predict the first snow/frost in the upcoming week. We are hoping it comes and leaves for a few weeks yet. This is fall in Alaska. 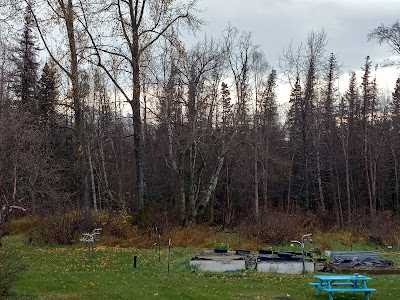 The Saga of our Stove

Stacia and I had two weeks of Bible study to do this Friday morning. We are currently talking through the story of Joseph. I'm always amazed at the insights each time through this story. I'm not sure one could ever mine all the truths in the story.

We had to run some errands, pick up meds and when we came home THIS was the state of the kitchen. 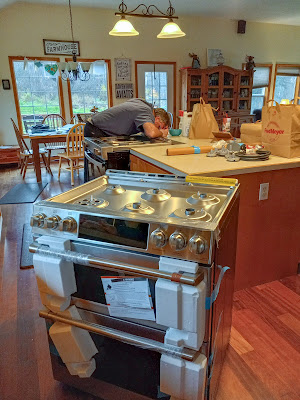 We have been without an oven for a year. We spent months going back and forth with our appliance repairman trying various parts to fix it. Nothing worked. That ended with us having a stove top - but no digital igniter etc....so for the past 6 months we've lit the stovetop with a lighter and used the oven downstairs.  Besides being inconvenient that oven is not dependable...and it sets off the smoke detectors.

The repairman finally told us there really was nothing any of us could do because we bought a Kenmore brand, but it was made by some other company - whirlpool, maybe.  Kenmore's repair department went out of business during COVID. Whirlpool won't give the info to those who call in for parts numbers for the off shoots of their brand....and so...we are guessing at parts.

We like to shop local. In March we went to a local store. We ordered a new stove/oven. We paid to have it delivered and installed. We were told it would take 6 -8 weeks. The general impression is it would be 6 weeks. We never heard. Michael contacted the salesman in July. "Not our fault, the manufacturer....it will be here by the end of July."

It wasn't here. We didn't get a call. We called again in August.  It will be here in 4 weeks - the manufacturer you know.

We got an email...it should be here in September. "Do you want to pay for it to be delivered?"

Michael explained delivery was already paid. The invoice SAID they would deliver it and showed the tow away and recycle fee.  BUT it didn't specifically show a delivery fee of $80 and so he insisted we had to pay that fee - again.  Michael told him we had paid it, the invoice mentions delievery....not budging. Something they told us would arrive in 6 - 8 weeks was now at 6 months, still wasn't in Alaska...and they want to quibble over their invoice. Things got heated.

Michael went down in person the day after a heated conversation. He apologized for it getting heated and said, "I'm just going to give you one more chance to make this right." The man said no. For $80 they lost a $4000+ sale.  The stove was still not in the state, they wouldn't guarantee when it WOULD ship from the lower 48. They were lousy at customer service. We cancelled.

Michael called Best Buy. He bought a new stove/oven fancier than I imagined, $1000 less, and they GUARANTEED they would deliver it on Oct. 7th. Michael asked, "How firm is that delivery date?" "Totally guaranteed delivery." O.K. We went with the big box over the local shop. Obviously, the supply isn't the problem, the bigger store ships more and it shipped sooner. We would have worked with the local if they'd simply been honest about the delay, kept us in the loop, and not called us liars about the fee/invoice.

Michael wrote a letter and sent it to the manager of the store in Wasilla, and the better business bureau in Anchorage and Wasilla. He shared the whole thing, showed copies of the invoice and how we desired to shop local but will not be giving any business to this local business in the future. This is sad as it is the only one of its kind in the valley and I don't want to drive to Anchorage to shop - but I will.

The store manager contacted Michael immediately. She APOLOGIZED. She said he was RIGHT; their invoice DID make it look like it was to be delivered...she said there was no way to make it up to us as we had ordered a new stove already. Quite honestly, they could have made a good faith offer of say "10% off your next purchase under $200"...but anyway...customer service is not king at this retail outlet.

AND we had a new stove/oven delivered....Michael studied it.... 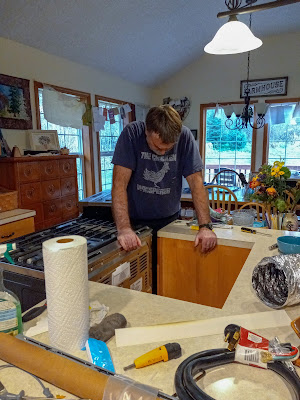 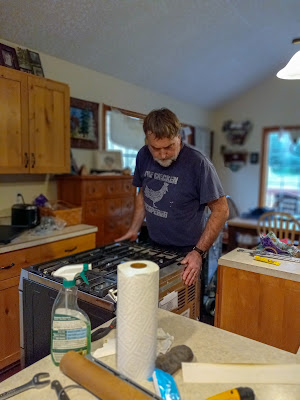 It was not a perfect fit. The sizes were just a bit different than the other one...I heard things like 1/32nd of an inch. I left with saws and sanders in my kitchen. 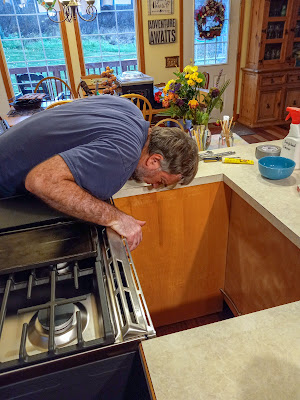 I came home and found things still in disarray and a mallet was now out too. It appears the size thing has been dealt with, but the gas line is in a different spot on the new stove. It's a different design from the last one.  Our son in law, Luke, is going to take a look at it on Monday and see what he thinks.  He is a plumber/ HVac guy. He knows what he's doing. 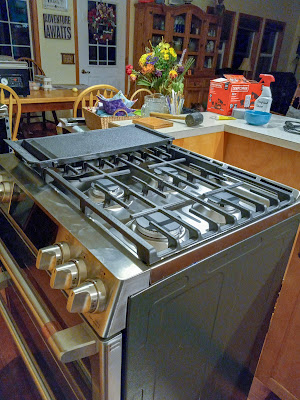 Saturday Michael got the display on! Look at it. The burners light without a match. It even promises to give me a Sabbath. I have no clue how the wifi and such work or WHY it is giving me wifi/bluetooth/sabbath options.... More? Maybe it will mop the floors?  I have a bit of reading to do. 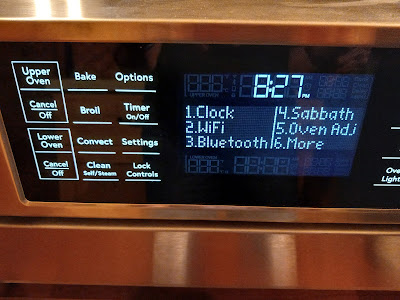 Michael moved it back until it bumps against the gas fitting...so this is now the look of my kitchen this Sunday morning. 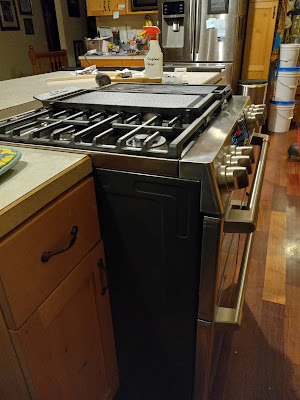 I am thankful to have the stove. I can see the benefits of two ovens - I can also see potential challenges...but I am THRILLED with this thing. AND it has SIX burners!!!!
It's going to be SO much easier to entertain going forward - well - once it's slid back into place. Next up - the kitchen sink and counters.

Joyfully Penned by DeEtta @ Courageous Joy at 3:18 AM 0 Gracious thoughts