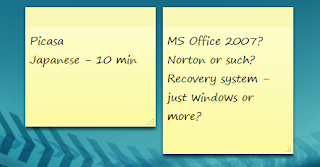 There you have it...a new laptop and *I* have to figure the thing out. ::snort:: I had planned to wait until Mike was home, but I only have 2 weeks to return it. We wanted two so that Mike can take one with him on his extended travels. Gotta have email and/or Skype!

I'm working on it.....and as you can see above....I discovered the snipping tool and the sticky notes from Windows 7.  One more way to feed my list obsession. ::snort::

We had a good day of school.

We had piano lessons.

I worked on a bit of regional PWOC and more local PWOC stuff.

I talked with Nate via Skype and worked out the final details for his trip.

I talked with Mom and Dad via Skype.

Stacia had 3 small cavities filled. She USED to love the dentist. She's not 100% sure any longer. She was doing fairly well until they put something in her mouth that made her spit...not a good thing at the dentist. BUT they'd not told her to use the magic straw until after she spit. ::snort::

The dentist asked Stacia, "Are you the one with all the brothers and sisters?"

We dropped Jared off early for Youth Group.

I was glad to get a call and be able to pick this up....
It's much bigger but I had to crop out the name on the uniform. I didn't get a photo of her hugging the thing. We had the base media center mount it and they were much faster than predicted. I had planned to make it more life-like by cutting around the shoulders and head....but it may be sturdier if I leave it as a block.

Murphy's Law says that the minute I leave home Mike will Skype. ::snort:: OR that when I do make contact with him the mic or speakers won't work...but we had a nice IM.

Spur of the moment I invited Windy to drive to base with me so we could visit. That made the drive back in to pick up Jared much more of a social outing. THEN I realized that I could probably ARRANGE a bit of social interaction during youth group. Hmmm....I may not want to give this perk up when Mike returns.

Joyfully Penned by DeEtta @ Courageous Joy at 4:09 AM 1 Gracious thoughts