This story was shared in PWOC today. It struck a deep chord...and I was surprised to find tears spilling down my face.  I may have heard the story before, but I want to save it here to remember.... when He says, "Not yet," there is a purpose. Tsunamis, health challenges, ministry losses, personal losses.....God knows what He is doing.


Teacup Story - God knows what He's doing (for all of us). He is the Potter, and we are His clay. He will mold us and make us, so that we may be made into a flawless piece of work to fulfill His good, pleasing, and perfect will.

There was a couple who used to go to England to shop in the beautiful stores. They both liked antiques and pottery and especially teacups. This was their twenty-fifth wedding anniversary. One day in this beautiful shop they saw a beautiful teacup. They said, "May we see that? We've never seen one quite so beautiful."
As the lady handed it to them, suddenly the teacup spoke. "You don't understand," it said. "I haven't always been a teacup. There was a time when I was red and I was clay. My master took me and rolled me and patted me over and over and I yelled out, 'Let me alone', but he only smiled, 'Not yet.'"

"Then I was placed on a spinning wheel," the teacup said, "and suddenly I was spun around and around and around. 'Stop it! I'm getting dizzy!' I screamed. But the master only nodded and said, 'Not yet.'"
"Then he put me in the oven. I never felt such heat. I wondered why he wanted to burn me, and I yelled and knocked at the door. I could see him through the opening and I could read his lips as he shook his head, 'Not yet.'"
"Finally the door opened, he put me on the shelf, and I began to cool. 'There, that's better', I said. And he brushed and painted me all over. The fumes were horrible. I thought I would gag. 'Stop it, stop it!' I cried. He only nodded, 'Not yet.'"

"Then suddenly he put me back into the oven, not like the first one. This was twice as hot and I knew I would suffocate. I begged. I pleaded. I screamed. I cried. All the time I could see him through the opening nodding his head saying, 'Not yet.'"

Then I knew there wasn't any hope. I would never make it. I was ready to give up. But the door opened and he took me out and placed me on the shelf. One hour later he handed me a mirror and I couldn't believe it was me. 'It's beautiful. I'm beautiful.'"

MORAL:
God knows what He's doing (for all of us). He is the Potter, and we are His clay. He will mold us and make us, so that we may be made into a flawless piece of work to fulfill His good, pleasing, and perfect will.

No temptation has seized you except what is common to man. And God is faithful; he will not tempt you beyond what you can bear; but with the temptation also make a way to escape, that you may be able to bear it.


My darling is striving hard for a GOOD attitude about this Biology lab her heartless mother has inflicted on her. ::snort:: 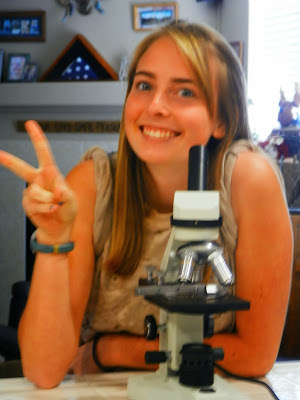 Um....Nolan is GOOD....STEALTHY....check out how he is plugging his nose while he observes these new life-forms which they've created in my new vintage Ball jars. ::snort:: 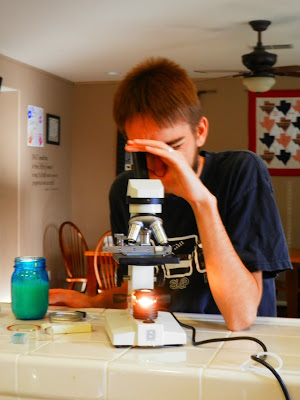 Nothing stealthy about Zander...tell us, son, what do you really think? 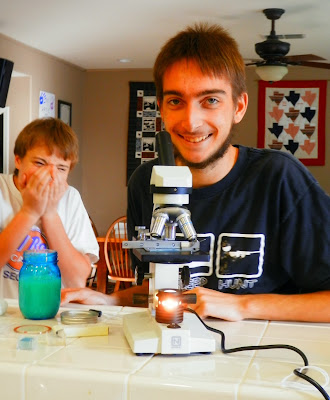 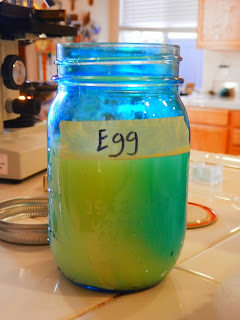 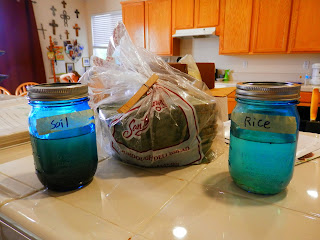