In the quiet of a Hospital Room

Shortly after Jared was born in 1994, he contracted RSV, a very aggressive respiratory virus known to be fatal to the very young and the very old. Since Jared was only a couple of weeks old at the time, it was very serious stuff.

It was one of freezing, sub-zero January nights in Hardin, MT.  After some wrangling with the local on-call nurse, De'Etta brought him in to the ER at our little hospital.  The doc met us there and found that Jared really was in dire straits.  He put him on 100% oxygen, gave him some meds, and began watching him very carefully. The doc said Jared would not have survived the night. De'Etta's five-day vigil began. I had the other four kids at home during this time.  As much as I was able, I came by the hospital to check on the two of them.

It was about day 4 that the medical staff felt he was "out of the woods," but they wanted to keep him there a day or so longer to make sure there was no relapse and that he had completely recovered.  Jared was taken out of the oxygen tent and both he and De'Etta went to a private room. It was about five in the afternoon when I went to the hospital to see how everyone was doing.  The door was closed so I opened it oh, so quietly and carefully.  The light was out and the room was dark.  There was a dim bit of light coming from a floor light, but it was so dim, it took a bit of getting used to it to be able to see by it.

De'Etta and Jared were both asleep.  I quietly closed the door behind me turning to go to De'Etta's bedside and promptly tripped over the legs of a hospital tray and fell to the floor.  There was a stainless steel bowl on the tray which also fell to the floor with me.  This bowl clanged with all of the vigor of a church bell on Easter morning. I groped for it in the dark to silence it, but I knew both of them would be awake and Jared would be crying.  I was laying on the floor clutching the bowl bracing myself for all of the tumult to come, but it never came.  No crying. De'Etta still slept. The room returned to total quiet. I laid there for a moment being thankful I had not somehow awakened either when suddenly I heard Jared give a barely audible cry. Suddenly, De'Etta flipped on a light, jumped out of bed, stepped over the top of me and went straight to pick up Jared.  She then turned around holding Jared.  As she did so, she suddenly stopped and saw me laying on the floor. "When did you get here?, and what are you doing on the floor?"

She had slept through me knocking a stainless steel bowl onto a hard tile floor as I fell in the dark.  Jared gives a tiny, little cry, and she is up and moving. Without seeing me laying on the floor, she stepped over me as she was determined to get to Jared. Now, that was some amazing maternal focus.

An Icy Day in Oregon

It's ICY! And cold! School's are closed - but we had an early therapy appointment.
Michael left for the shower house. I saw him go around the corner. I followed....and BAM...up popped an odd man intent on visiting. It was still dark outside. Have I mentioned the odd things going on since we got here?  I immediately began calling, "Mike, Michael???" and ignored the conversationalist in the shadows.  One of the doors opened and Michael grabbed me in. He had his phone in hand and said he'd been trying to call me to warn me about the man outside the shower house. ::snort::

Freshly showered and laughing, we realized the appointment was 90 minutes later than we expected. Oops.  The appointment went well. We took extra time asking all over the VA clinic for anyone who may have a list of local doctors who will accept United Healthcare/Military West. We had no success. Later at home, I tried to search United Healthcare West instead of Tri-care, and I found pages of providers. I settled on one with a nice female name. She was a CNM which I thought meant a Nurse Practitioner....and then I realized I had chosen a nurse/midwife. 😂 The search continues.

We enjoyed a visit from John and Nadine this afternoon. It's always refreshing to connect with them. John served as Open Bible's Chaplain Endorser during Michael's ministry as an Air Force Chaplain. 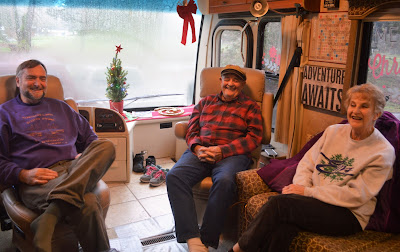 Stacia made a few dozen cookies and they turned out GREAT. I made Chicken Divan and it turned out GREAT. I think we've figured out the micro/convection oven. Yay, we will be able to eat in our new motor home. 😋(Blogger says this emoji is a face savoring delicious food - just in case it looks like something else to you too.)

Michael has long suggested I blog stories from before the blog began in  2005. He has encouraged me to capture our earlier years. I've meant to do it - but I've been struggling simply to keep current.  I'm excited Michael is going to begin writing and sharing some of our "pre-blog" stories.