Catching Up With Friends

Tom and Michael were both in the flight program at their high school in Northern CA. After the earthquake in Japan, the local paper interviewed Michael. We were stationed in Japan. Tom, and his family were in Colorado Springs. He had access to "The Global" and was able to find a work email for Michael. They got in touch and determined if we were back in the Springs, visiting family, we would look them up. Today, we had lunch with Tom, Yelina and his children, Anthony and Michael.  Anthony was cramming for college finals. Michael is an 8th grader and he and the kids had fun playing games, while we adults caught up.
I had a lovely time getting to know Yelina, who is from the Ukraine. Her story was fascinating. The kids had fun with Michael. The meal was yummy and I KNOW Michael and Tom had fun telling old stories back and forth and catching up.  I'm glad Tom looked Michael up and that this meeting happened.

We have two sets of friends from our assignment in 2002-2005. Our Alaskan assignment. It worked for all us to meet at Ken and Lynn's. We got to their house in time to Facetime with their son Matt, who is in Germany. Wow - these kids have grown up in 15 years.

Katrina and Rachel were friends of the older three/four in Club Beyond during our Elmendorf years.
Alex was 1-3 and Nolan was 3- 5 @ EAFG....Stacia was in my tummy when we left AK. Frances was Nolan's pre-school teacher at chapel. There were no kids their age at this gathering - but they have learned to bring some cards and settle in wherever we are. LOL 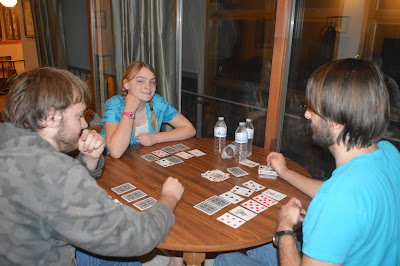 Lynn brought out the photo album we'd compiled for her when she left Alaska. It was very odd how we've all aged, except for Frances. LOL

Renewing friendships from years past reminds me again how truly blessed we were to minister in the Air Force. If we weren't going to Alaska, I'd be sorely tempted to retire in Colorado Springs.