"Technically" Friday was Michael's CTO (Time off when you preach) and Monday was a holiday - a four day weekend. Except - um - ::snort::  He did a bit of work on Friday, preached on Sunday and we were tired on Monday. We had talked about going out of town this weekend or next weekend (another 3 day weekend and Michael's birthday). He has a commander's call on Friday and is picking up duty for another Chaplain on one day next weekend, we won't be going away next weekend either......it's a tad bit frustrating to be within driving distance of  family and not be able to get away......however....

By today we are happy to be home. We are happy not to have an eight hour drive ahead of us. There are a lot of deals around town for Veterans - but quite simply - we're tired. We thought about it and decided to sleep in, play with the kids, Skype with the older ones we could catch (all but Josiah and Shelby) and weelax!

Michael taught Stacia how to make really cool paper airplanes. Zander bragged he could shoot them out of the air with his Nerf gun. Game on. Michael challenged him to prove it - and he could and did! Which led to an all out Nerf battle - fairly appropriate for Veteran's Day?  Can you spot the four warriors below? 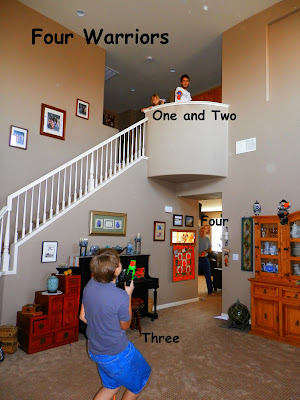 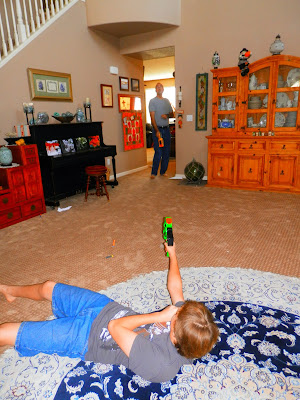 I'm amazed at how Michael is able to continue with his normal routine in the face of chronic pain. Many remember his emergency surgery in 2012....and then another at the end of the year. The pain has never gone away. They said they could go in again and see if they find something new....but he opted to wait until we arrived stateside.  He has a referral this week to a specialist off base.

In February of 2013 he injured his shoulder. We aren't quite sure how - though we think it involved lifting of suitcases and boxes.  He's had an MRI. The cuff is not torn but it is still very inflamed and he has very little movement. He's saw PT in Japan - lots of torture; no help.   He had a cortisone shot last week.....unfortunately, he's still waiting to feel relief. He's seeing PT again...which doesn't seem to really help the swelling or the pain.

All that to say - the fact that Michael continues to work 40 - 60 hours a week and engage as a dad with the pain he's enduring amazes me.  He deserved some rest today.....and he got it.....it was good to be home rather than traveling.  Yes, I still love to watch him sleep. 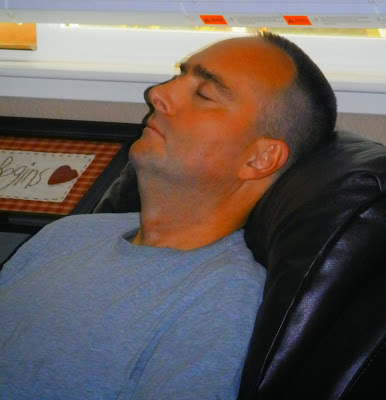 Look at this rip-roaring Monopoly game. It appears Stacia and Nolan merged and won it all.  Note the Nerf gone at the ready...Zander contemplated a hostile take over.

It turned out to be the perfect long weekend and I'm looking forward to another one next week. LOL  I am a bit concerned about getting 5 days of school done in 2 and 3 days this week. We usually take PWOC day off I'm debating staying home to get school done or just calling this week a wash! Stay tuned.

Day one of P90 - will I survive? Working towards my anniversary body. ::snort::