A Tale of a Fishing License

As a resident, disabled vet,  in Alaska, Michael qualifies for a free sports hunting/fishing license.  We set about applying....we DID have the documentation required to prove residency....but we had a question in our own minds.  They ask if you've taken the PFD the year before. We didn't. I suspect they use the PFD as a litmus test; "What resident in their right mind wouldn't take the PFD?"  We have qualified to receive the PFD during our years of active duty, but after the first year we quit applying for it. Our reasoning (and it's ours alone, no judgment if you've chosen to take it as an active duty family), was we were not actively contributing in the state of Alaska's economy and we would forgo the benefit of participating in the benefits of Alaska's economy.  Our question with the licenses resolved around the fact we had the documentation they require to prove residency, but we knew after active duty, we'd been taking care of Michael's mom and then stayed to help my mom with her cancer treatment and were not up here immediately after retirement; therefore, we were not in the state the required amount of days in 2016; though Michael was in 2015.

We called the office which handles such things and they said the troopers would need to adjudicate Michael's application. They said it sounded like he had a good case for residency, but this is their busy time of year and it could take months to have an answer and be issued a license.

Meanwhile THIS is prime fishing season. We told them to withdraw his application for a free residential application, our integrity is worth more than the cost of a non-resident license and we want to fish NOW - not wait for months to hear.

Josiah had Saturday off. He, Michael, Nolan, Alex and Stacia spent the day at the lake - well - lakes! Their mission was to catch Pike. You can catch as many Pike as you want, by whatever means you desire, in Alaska. You are NOT allowed to catch and release Pike. The boys insist they taste better than trout. On their last trip they netted 15#s of Pike. We've seen the photo of two over 2 feet long.

Being a bit nervous about both bears and combat fishing I opted to stay home. I didn't feel 100% anyway. I also am NOT going to pay for a non-resident license and so will wait until next year to fish. The younger two can fish free with Michael and/or Nolan. We bought Nolan a non-resident license. We were READY. They started at Anderson Lake, moved to the Nancy Lake area, went to Bald Lake, and finally settled on renting a canoe at  Tanaina Lake. They rented a canoe and rowed around, while fishing.

Not one Pike in the frying pan.

Ah well, we don't have a freezer to store fish yet. 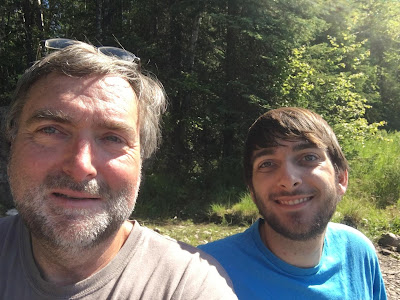