I'm back home, such as it is - Michael

We just arrived back home. It was a pleasant enough trip all things considered. Anytime you travel in theater, there are some oddities and some adventure. For this trip the oddity was arriving at the pax (passenger) terminal when we thought we were supposed to only to discover that the actual time we were supposed to arrive was in Zulu - 3 hours later. So, we ended up spending the night trying to get a nap - nearly impossible - in the pax terminal. We actually flew out at around 0600 instead of the 0300 we expected - better than being three hours late. 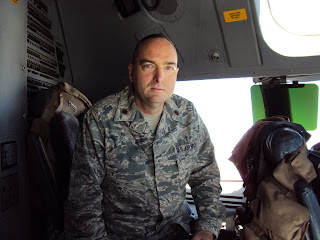 The adventure part was going up to the flight deck with the aircrew. It was what is known as a glass cockpit - all of the instrumentation runs through computers to LCD screens. It definitely makes my old Piper Cherokee (actually my High School's Cherokee) look absolutely medieval. This is the way of the future though.

All in all a great trip. I will blog more about the conference, meeting old friends and life in the desert at a later time. Right now, I am needing sleep. I have been running since about 0830 yesterday, and it is now about 1400.

Joyfully Penned by DeEtta @ Courageous Joy at 1:27 AM 5 Gracious thoughts