The last few weeks have been quite busy, but the story does not begin when I was feeling lousy beginning the first week or so of March. It began in August 2011. I had gone to the ER with some really bad heart burn. As it turns out, they said I had acid reflux (the technical term is GERD - gastro-esophageal reflux disease). The PA I saw later ran a bunch of labs. He was not necessarily happy with where things were at, but he did prescribe Nexium and set me up for a C-scope. I can think of a lot better ways to spend a morning, but it was one of those nifty things that you get to do once you turn fifty. Shortly before the C-scope, I had another bad round of GERD. The C-scope expanded to include a look down the top end as well as the, ah, other view. This confirmed the GERD diagnosis.

Over the next few months, there were a few more incidents of GERD - Nexium to the rescue - but I also noted that there was a pain in my right side at the base of my rib cage. Now, for those who know a little bit about such pain, you would have said this could be very bad, but there are a few things playing against it. 1) I don't get sick. I have gotten through 51 years of life and never had an IV and, with the exception of when I was born, I have never spent a night in a hospital. 2) This GERD thing, I was told, can easily "generalize pain all across the base of the rib cage." January brought a nasty bout of the flu - it hit the morning I was to take my PT test. Went to the ER. They put me on bed rest for a few days. PT test got pushed into the future. Did not feel well throughout February. Just a bad feeling that things were not right, but nothing you could hang your hat on.

1 March took the PT test. Managed an 88.9. Not bad for me at the best of times. The weekend brought another round of GERD plus the flu - we thought. Went in to Dr B (not my regular Dr.) the next week. He heard GERD and flu, and it totally made sense except the pain in the right side. More generalized GERD pain. The GERD settled down over the weekend, but the pain in the side did not go away. By 14 March, the pain was intense enough I could not sleep. Made an appointment for 16 March with my regular Doc. The labs came back virtually clear. A little blip in one, but that was it. During the exam, Dr. T was poking on my tummy when he pushed down on the right side. I knocked his hands away it hurt so bad. This generated more labs and a call to radiology to do an ultra sound. They initially scheduled me for 27 March. After a call from Dr T, they were able to get me in on Thursday, 18 March. Tuesday and Wednesday nights were virtually sleepless.

When Thursday rolled around, I was one really hurting puppy. The ultra sound tech took a few photos and said you probably are not going anywhere today. The gall bladder was not so much as not doing its job, but actually had given up the fight and gone over to the enemies' side. It was huge and appeared full of sludge and gangrene. The surgeon was called in very quickly followed by a CT scan. There was talk of sending me to Hachinohe for the surgery, but the CT scan showed enough definition that it was within the scope of care for our little hospital to handle due to a suspected clogged duct from the pancreas. I was checked in to the hospital. Massive antibiotics, IV's of all sorts, and morphine followed, but the morphine was not really cutting the pain. The surgeon, a Christian lady from the chapel, wanted to give the gall bladder a little time to settle down before pressing on with surgery. Then came the discussion of gall bladder cancer.

This really was the most disconcerting part of the whole thing. Fortunately, it was discounted fairly quickly. Gall bladder cancer is a seed cancer. Anything that cells from the gall bladder touch turn cancerous. Apparently, the normal course of action is to just close you up and send you on to very specialized medical care. Mostly what it means is you need to have your will in order and have a current medical power of attorney.

Friday morning finally rolled around. It was a bit of a blur. I think I signed some papers. I remember being wheeled out of the room to the OR. I remember it was really cold in there. I remember seeing the surgeon getting some things in order and gaggle of other folks doing things. I remember being helped onto the surgical table - it was very narrow with barely enough space for me, my headrest was about the size of a small doily. I remember asking about the coldness (the surgeon is really wrapped up in a lot of layers of cloth or something and gets very hot in all of that stuff) and then having them put blankets on me. I remember the room. I remember them putting something in my IV, and then I woke up and saw De'Etta, and it was over. Six hours of surgery, an eight inch incision and a JP drain. It was quite the day. Then begins the healing process.

Michael is determined to be at work on Friday (though the day will be broken up with labs, post op appointment and Good Friday service).  Since this is his goal, I began to enlist his help around here more, get him up and active.....we walked around the block today...and I nabbed him to help with school.  I've found staying home to care for Michael has been a BOON for school. This is only Tuesday and we've gotten 4 weeks of Tapestry of Grace done AND we have more time for the fun things too....for instance....


Have you ever tried to jump like a macropod (big foot) marsupial? We have.  First I had Michael show the kids how far 30 ft was from their starting point....as a kangaroo can jump that far in one hop. 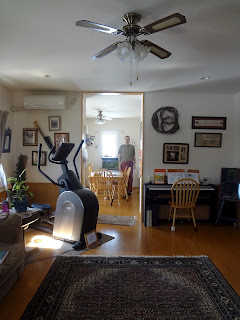 Then I challenged the two to hop as far as they could.... 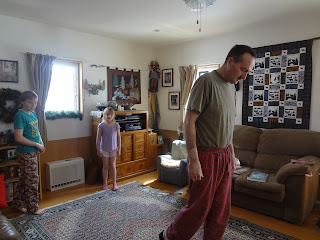 Michael was exempt from hopping - he was our official hop measurer (I'm aware this is not a REAL word).  We discovered none of us can hop anywhere close to 30 feet at one hop.


We also discovered Michael is bored - but he tires easily - I figure that means he needs to rest.

Joyfully Penned by DeEtta @ Courageous Joy at 2:42 AM 1 Gracious thoughts