I've struggled with how to write this post and as I begin to write I'm not sure what exactly I will write. I want to be honest but Biblical, transparent but I'm really tired of being vulnerable.

Last spring and this summer, as many of you know, was rough around our home. I found food compulsions I thought were long gone resurfacing. I was sickened and filled with shame. I realized during this time  I was made for MORE than this. Really, I was. I also felt hopeless and fairly stuck in the cycle.

I was speaking on a couple of spiritual disciplines at a local PWOC retreat in May. Part of the time was an hour to go away alone and listen and process what God was sharing with each of us. I had spoken right before this session on surrender. I asked God what He would have me surrender. He said "Chocolate." I argued. Really. How about Thailand? "Chocolate." This is SILLY. "Chocolate." For how long? "Chocolate." Alright then - chocolate. I gave up Chocolate on May 20, 2012. I have no idea how long this will last. I did have a few tastes in July and I did have a few bites of cake last week. I know that I'm to give up chocolate until it no longer masters me.

I learned a lot through this. God has given me the fruit of self-control as I yield, surrender to the Holy Spirit daily.  I can be rebellious. Chocolate was far too important, craved and loved. I also continued to have migraines...so I knew chocolate was not a migraine trigger for me and some day I may be released to eat it in moderation. The thought gives me joy.

I began traveling in June. I was doing great with skipping chocolate. I was working out. I still wasn't losing weight. I knew I wanted God to break the power of compulsively eating food in my life. I saw myself in a dressing room mirror at Yokota and was APPALLED...I had FAT knees and thighs. I bought a journal and told God I was ready for Him to lead me on a journey out...and I planned to journal the trip. The next day I heard my father in law had died. We went to the states. I gained weight by the time we came home 7 weeks later.  I was still studying spiritual disciplines and asking God to SHOW me what to do about my health.

I began to be led to an extended fast. I don't take those lightly given my background with food issues. I had been told too that to eat less than I was would kill my metabolism (hypothyroid). I couldn't get away from the idea that I needed to fast. A friend posted on her FB a quick blurb about a fast she'd finished. I emailed and asked questions and was reminded about the Daniel Fast. This seemed an answer to prayer. I could fast and not kill my metabolism. I did some research here and read The Daniel Fast and  A Woman's Guide to Fasting. This is the book Tara, as well as  several other friends recommended.

I talked it over with Michael to make sure I wasn't simply justifying another crazy eating experience. He thought it sounded good. He made a comment that Daniel wasn't fasting - it was his lifestyle of eating. That turned out to be prophetic, but I'm getting ahead of myself. Michael joined me for 40 days.  I decided I'd obey and put the weight thing on hold even if it did mess up my metabolism. I fasted for 4 items. I won't share them here. I prayed about how God would have me walk this out. I knew I was to focus during this time on prayer (reading, studying, practicing).

At some point I realized I needed some recipes and that what we were doing was Vegan plus. No added sugar (even "natural sugars"), no leaven (yeast), no meat (or as I say, nothing with a face), no dairy (milk,  CHEESE), no eggs, no chemicals, nothing processed. No soy substitutes for me as soy is thought to suppress thyroid function.

As the fast neared it's end, I continued to pray about how God would have me end the fast. I wasn't sure I should go back to eating the way I had been. During the fast I expected clarity in prayer, deeper intimacy with Jesus...but some unexpected rewards have come my way....


And those are only rewards to do with my battle with food compulsions. There were so many  clear answers to prayer and comfort as I walk through a transition in my life which is bringing me quite a bit of sadness (but that's another post). Michael and I talked. He planned to go back to  meat - but way less. I asked him what he thought about me staying vegan plus until I reached a healthy weight and then adding some foods back in later as I researched. The fact that I've not had a MIGRAINE is huge. Obviously, something I ate was triggering them. I have no desire to have migraines and gain weight, and I know that will happen if I return to "normal".

We agreed this seemed sane. Please note I do not think EVERYONE has to eat this way. I still hold to the principles in What the Bible Says about Healthy Living, but obviously something in that "healthy" list was causing the migraines. LOL

I have been told by FOUR doctors I would NEVER go off Zocor. In May my cholesterol began to rise though I was on Zocor. They upped the dose. I also heard the lecture about heart attacks being the "number one killer for women my age." Then Michael had that heart scare. Go figure.  I had been eating healthy and begging God for HEALTH....still I didn't expect this fast to affect that...but wow.

Today I saw the PA.  He was suitably impressed. He said I'm doing excellent and to keep doing what I'm doing. He said he thinks I can get off Zocor. I will have my numbers rechecked in 3 months. If they're still this good, he'll cut the Zocor in half with the goal of being totally off of it in six months. When I told him I'd gone vegan - he said he could tell. He said he'd like me to add fish back.  I've not decided.  The results today after 6 weeks on a vegan plus diet (because I had the blood drawn after the fast):
He also adjusted my thyroid  meds to what was working before. The only problem I had at that dose was insomnia...but he said my body may adjust to that. We'll check that in 6 weeks.

He said cheese and wine are the two biggest triggers of migraines, and since I don't drink wine, he suspects cheese is the culprit...which makes me incredibly sad. My FAVORITE snack was cheese and crackers (carbs and protein).  There aren't really cheese substitutes over here, and most are soy based anyway. But I'm telling you NO MIGRAINE in over 7 weeks. I even was around a trigger yesterday and didn't get one...though I could feel it threatening.


I was so thankful for such an amazing answer to prayer! On the way home it hit me....he said, "Keep doing what you're doing."  This really IS what God had been whispering to me...I would need to give up some things for a lifetime, but He would show me the way out of bondage if I was willing to follow....so I'm still following....I will be vegan plus for at least another 6 weeks. The doc talked about adding in fish and chicken and red meat once or twice a month....so who knows...maybe I'll eventually be flexitarian! He seems to think I can add in meat eventually and still stay off Zocor.  And Michael was right...the "Daniel Fast," for the most part, is really what Daniel ate day in and out.

Joyfully Penned by DeEtta @ Courageous Joy at 4:40 AM 11 Gracious thoughts


I was talking to Liz a couple of weeks ago about getting SPINACH and LETTUCE at the commissary. She noted I had several artichokes in my cart and told me they were "iffy". I agreed, but told her we loved them. She shared how they roast and sell them on the street in Italy. With garlic cloves and olive oil....and so.....I found THIS recipe.  We ate them before I snapped a photo. It looked a lot like this one. ::snort:: Using a serrated knife, cut off the stem of the artichoke where it meets the base. Turn the artichoke around and cut off 1-inch of the top. Quickly rub each artichoke with a cut lemon so they don't discolor.

Tear off 4 large square pieces of heavy-duty foil. Rub a few drops of olive oil on the foil and place an artichoke stem side down. Stick a clove of garlic into the center and push down an inch or so. Sprinkle over 1/4 tsp of salt. Drizzle 1 tbsp olive oil over the top. Finish by squeezing the half lemon over the top. The lemon juice will "wash" the salt and olive down in between the leaves. Gather up the corners of the foil and press together on top to tightly seal the artichoke (like a chocolate kiss). You can wrap in a second piece of foil if you don't think you have a tight enough seal. 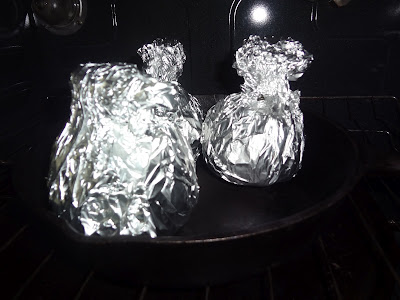 Repeat with the other artichokes. Place in a roasting pan and bake at 425 degrees F. for 1 hour and 30 minutes. Let rest for 20 minutes before unwrapping and serving.
Arielle and Stacia split one. Nolan tried it. Michael and I liked it. I ate it without butter and it was another vegan treat. LOL

Joyfully Penned by DeEtta @ Courageous Joy at 3:07 AM 1 Gracious thoughts