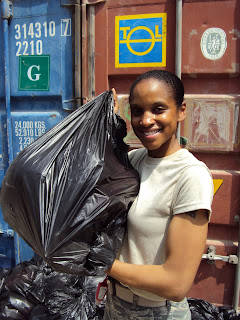 We have been working towards this trip for some time.  We had one planned a bit earlier, but decided to put it on hold for a variety of reasons.  This trip was coordinated with our British contingent.  They handled our security detail and transportation - and a fantastic job at that.  All told we had seven volunteers to do the distribution and a large number handling everything else. 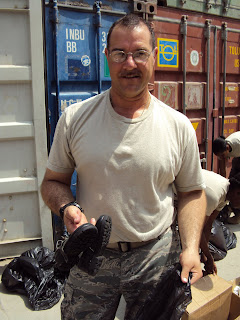 Right after the worship service on Sunday, I mean right after - amen, bless you, we gotta run kind of "right after, we ran over to movement control (MoveCon) dispatch for a briefing.  After the briefing we had a few minutes to load the supplies into a van, grab our personal gear, and head for the vehicles.  The drive over was no more or less eventful than any other drive.  It had its normal share of crazy Kabul drivers where any lane can be the right lane.  We arrived on site right on time.  Our folks from the NGO (Non-Governmental Organization) had already organized the people to receive the supplies. 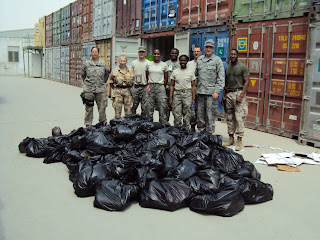 We brought shoes, toiletries, clothing, paper, pens, pencils and a whole assortment of other items. to give away.  A team of folks had come by on Saturday to organize and build bags to give away.  We put together 86 bags in about an hour - they did a great job!  We had a couple of big boxes of candy and other such goodies that we set aside to hand off to the village elders at the very end.  They were to give them out to all of the families equally after sunset - it is Ramadan, you know. 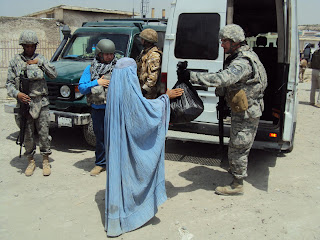 The giving went very well with only a few glitches and hitches.  A few kids got through and decided to assert themselves as someone who should receive a bag of supplies.  I had to pick one up and set him outside of the group in the care of a man who was there to help us with this sort of thing - although to be fair, he apparently did not know that that was why he was there. 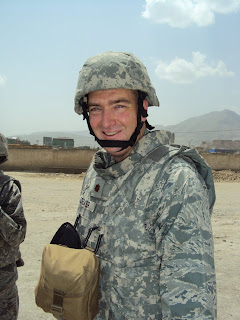 After the distribution of supplies, we, SSgt B and I along with our NGO representative spent a few minutes talking with the IDP camp elders.  We had to explain the purpose of the goodie boxes.  While we were talking, our British security team told us it was time to go.  With farewells to the elders and to our NGO rep, we piled into vehicles and were gone.  The security team collapsed the perimeter and the show was over except for the ride through traffic with all of the crazy Kabul drivers where the right of way is defined as that which gets me to my destination by the most direct route.
We had a British PA team with us as well as a US combat camera Marine.  I will be posting more photos as they come available.  If anything shows up in the media, I will post that as well.

Joyfully Penned by DeEtta @ Courageous Joy at 10:04 AM 1 Gracious thoughts