Michael loaded, tweaked things, tightened things and hitched things. Stacia and I decorated the trailer and Nimo.  We were told Uchi was off limit to our pens. 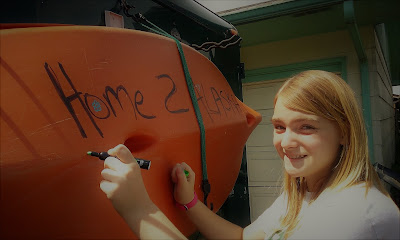 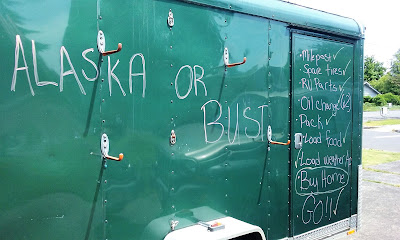 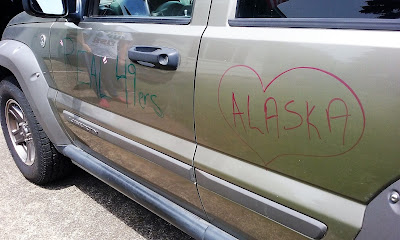 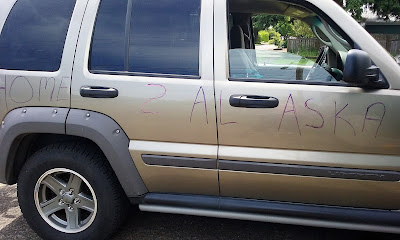 I asked him not to add ropes over Stacia's artwork - but sometimes, I'm told - practicality takes precedence.😉😜😉 ::SNORT:: 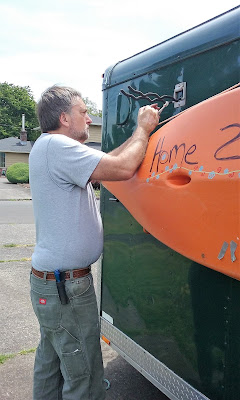 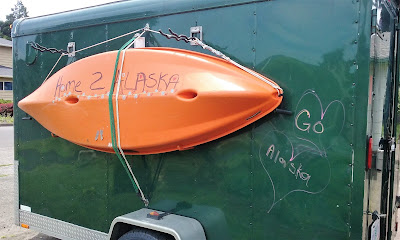 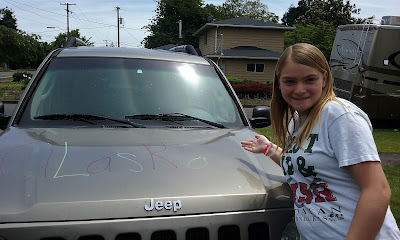 We took a few minutes to help Dad with a project...and he helped us as well. He double-checked hitches and such and told me he thinks the trailer is too heavy for me to pull with Nimo. 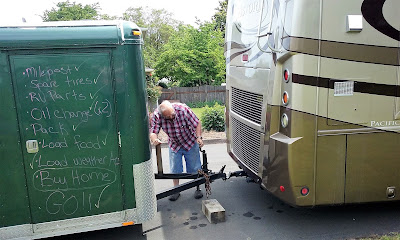 And then....came the moment to say goodbye to Mom and Dad. It's been easier to do that lately, as we lived in an RV, had no strings to tie us down, and could drive in often. Things are changing, but we know God has all in His competent hands. Mom has completely finished her cancer treatments! She gained an amazing amount of strength in the last week. It's a good time for us to join our kids in Alaska.
As we drove out of town, I couldn't help thinking of all that had happened since we drove into town  mid-November.  We knew we had to stay for Michael's therapy. We have new tools for fighting Parkinson's and referrals to clinics in Alaska. But there was so much more to our stay than Michael's care. Mom was diagnosed with cancer, went through surgery and recovery; Mom G passed away and we had a memorial service and a graveside in Denver; Gideon arrived 5 weeks early; we were able to be on hand when life began to transition for BreZaak; and be on hand to celebrate CoRielle's great news of Baby S on the way; we enjoyed spending time with all our  family....the timing was God...and we trust in His continued timing and leading.


This is NOT the most exciting view from my windshield, but there you have it. 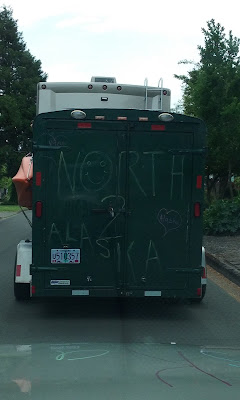 A funny thing happened on the way to our home for the night. The GPS began saying we were 3 minutes away from our stop. We were significantly early. And then it said we were arriving at "Joe's Hamburgers."  Seems it interpreted Stacia's "Go to Portland Fairview RV Resort," as "Joes Coffee, Portland." 😲 We put in the RV park's name and had another 51 miles to go - in heavy traffic. Ugh....seeing that North to Alaska kept my spirits up.😀 Later on my GPS (Gabby Abby) told us to exit at Powell's - but Michael's (Samantha) didn't give him the same message. We ended up pulling in at the same time.

We were able to get a pull-through spot, leave the trailer hitched and park Nimo beside the whole thing. I hope we find such easy accommodations on the rest of the the trip. We're pretty much winging it - things have been so busy we've not made reservations.  Our handiwork in decorating the trailer is making us the stars of rest areas, restaurants and RV parks. 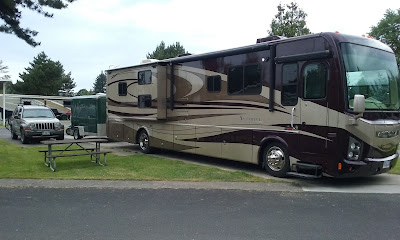 Michael informed me in the last few days that this is our last MILITARY MOVE. They are giving us mileage from Yuba City to Anchorage; we only are expected to drive 300 miles a day, AND WE GET PER DIEM for 9 or 10 days.  Our lodging is going to be minimal compared to per diem (expecting hotel rooms). With that in mind there was no need to cook when we unloaded....

We went in search of a restaurant I found on the Happy Cow Ap. It was to have vegan options. We took a wrong turn and went to a family owned diner instead. I had a great salad and everyone else was happy as well.  Michael crashed - which was bound to happen after the way we've been pushing. Stacia and I watched Anne with an E, there are only 9 episodes on Netflix.

Tomorrow, we pick the boys up at 0430 from their Epic Alaskan Hike, and head up to WA, through Canada, and on to Alaska.