The Tribe Goes to work for CoRielle

You may remember CoRielle closed on their first home in August. They are still living in the basement apartment. WHAT? It was a rehab loan. The home needed work. The bank required even more things to be upgraded than CoRielle would have done. They hired a contractor and began to wait to move into their home. All the paperwork clearly noted this was a rehab loan and work had to be completed by Oct 31st.  They KNEW they wouldn't move in in August...but they also KNEW that all the work would be done by Oct 31st - as required by the bank.

As the weeks went by and work wasn't started, Cory began to do all the demo work himself. Anything to speed up the process.....he took up flooring, removed insulation (moldy), removed baseboard, doors and frames, removed all kitchen appliances, cupboards and counters, removed all bathroom features, removed a wood-stove and hearth that wasn't up to code....In the end they have the bones of a house....empty, cleared and ready for a contractor to zip in and finish by Oct 31st.  It was obvious the contractor would NEVER get it all done by Oct 31st and he hadn't done anything by mid Oct.

It became apparent...even with all the demo done....the contractor was not going to make their home a priority.....it was not going to be finished by the bank's deadline. So....the contractor is out of the picture, the bank has extended the date for the work to be done, and the  tribe has moved in to "get er done" under Cory's direction.
Cory took Tuesday and Wednesday off. Michael and Alex cleared their schedules. Arielle goes over after work. Jamin and Nolan have both shown up after work.....Cupboards, counters, appliances, bathroom furniture, paint,  carpet and flooring are waiting. It WILL get done.

They worked long and hard today. I love the way Benny shadows his Daddy and Papa.  He should know how to build a home before he's 2 years old. LOL 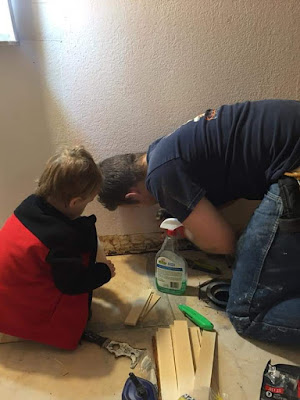 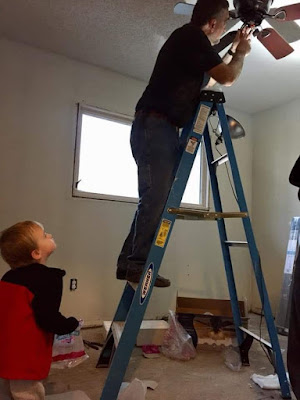 I've been told the plumbing is ready for the tub and toilet to go in....3 electrical fans are up and 15 plugs ins are wired and connected. Arielle washed walls so they can begin patching and painting.

*Note all photos are from Arielle.