We've not  quit smiling since hearing Larissa said yes.....but today the excitement soared from cloud 9 to over the moon.......any mail - real mail - is cause for great excitement around here.....
It's from Larissa!  Stacia wasn't expecting a letter from LARISSA! She had sort of mourned the fact she's no long flower girl material......and she was happy to hear the big girls were invited to be Bridesmaids...but I could tell she was the tiny bit sad not to be young enough or old enough to be in weddings right when "people start getting married." Yeah - PEOPLE - let's put a moratorium on weddings until she can grow up enough to be in your weddings. ::snort:: 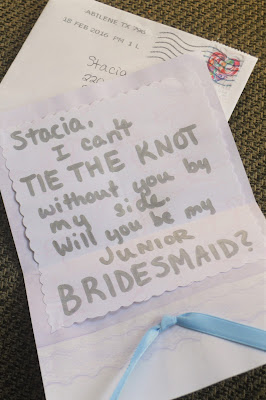 She wasn't exactly sure what a Junior Bridesmaid is - but I assured her she would get to buy a new dress and be in the wedding. The smiles haven't stopped.  The big question now is, "Should I cut my hair or wait until after the wedding."

We weren't 100% sure of Jared's plans for groomsmen, but texted him to check when we heard the big girls got invites and knew Stacia's was on the way. I was 99.9% sure these guys would get invited to participate in the Big Day - but wanted to know for sure to help steer the "non-emotional male feelings,"  if they weren't.  Jared told me he planned on inviting these two to be groomsmen, but isn't as "on top of it" as Larissa. I suggested he wait to ask them until Stacia received her invite in the mail.   We were outside when he called.....and I put him on speaker phone and called the boys over.....they were a bit reluctant.

I would be honored if you would both be groomsmen!
Yep - they've gone from being excited spectators to being honored participants. We are thrilled Larissa is joining the family and are humbled by the way she's embraced our crazy, sometimes silly, often chaotic, tad bit overwhelming freakishly large  family.

THAT is so precious!
Bre D

PERFECT to say the least!