Comedy in the ER

We had some excitement on Monday. The first time this happened, we were in Japan and Jared was in TX. It's happened quite a bit since then. We were happy to be nearby this time.  Yep, his heart again. 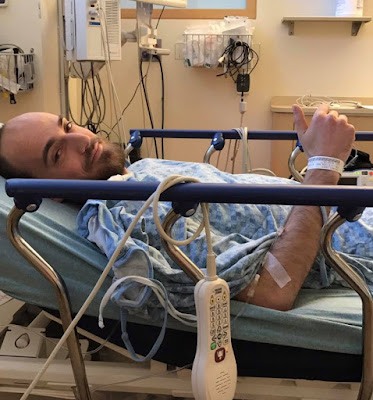 Here is what Larissa shared online. This week started off rough, but even in the middle of it Jared was making jokes and getting the medical team to laugh. We are so grateful to finally have some answers for what is going on with his ticker! The staff at Providence was absolutely amazing. Please keep him in your thoughts and prayers as we move forward! He is doing a lot better now, and still making jokes!! And don't worry, this photo was posted with permission 😘😘 And, I didn't post until I had their permission, as well.

This is the second time Jared has been at Providence and they ROCK. They have given him a diagnosis and went further to say it is caused by one of 4 syndromes. By looking at his EKG's and comparing, looking at what he was experiencing when he presented, they think they KNOW why this keeps happening to him. If it IS, they can treat it.  He will be seeing an electrophysicist for follow up care.

I am so impressed and thankful for the cardiology team at Providence!!!!!  Turns out the doc in TX didn't do the whole test which would have been helpful. He did a heart cath and it showed no blockages....he didn't stress the heart to see which parts were causing the repeated episodes of fast rate (240) and irregularity, and which should be treated.  Of course, this happens when one has a presupposition. Jared was a college student and the doc made snap judgments. These docs listened and believed him. It makes a difference.

In true Jared fashion, he refused to ride in an ambulance from his town to Anchorage. And so, Larissa bundled him into the car and made the drive in 12 minutes! She rocks!