If you'd like to see and hear a video about this day check out our YouTube channel by clicking the underlined text.

Sunday was the G family's first Sunday on the nursery rotation at church. We had a lot of fun playing with the children. Michael also had fun fixing toys and door knobs. 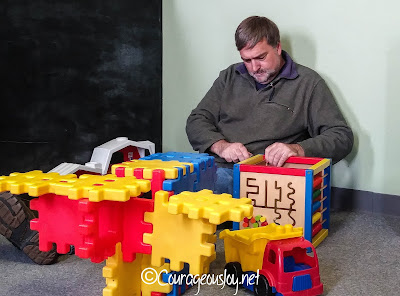 Cory attended a men's retreat Friday night and so had to work Sunday. Look at Benny sporting his DUCKware. He is 5 months old now. 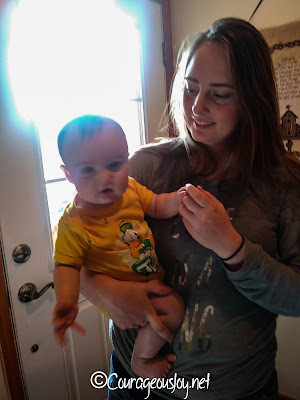 Josiah, Jamin and Jared came out. We had fun visiting, eating, playing and working. Jamin has been busy and passed the realtor exam. His license will be final this week.  He's working with a group in his hometown, and also pursuing a couple of teaching/coaching type things.
Josiah helped Michael map out where the Chicken Coop will go. 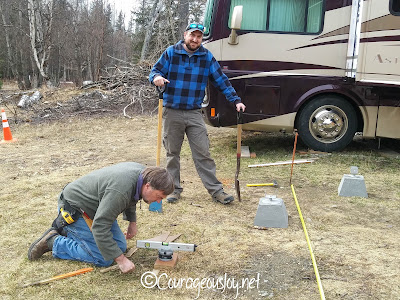 These chicks are so much fun. They are fascinating....and we've seen several incidents that make me wonder why God calls us sheep and not chickens. ::snort:: 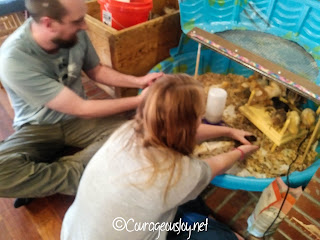 For instance, one little gal pecked away at the paper towels and was rewarded with a nasty, dirty, piece of towel in her beak. I don't think the others even KNEW what she had, but they began to chase her around and around the brooder. It seems we always want what we don't have.  That'll preach.

We have been trying to isolate a bird with diarrhea. We think we have it figured out. Michael suggested we put a small dot of food coloring on her back.  I did so. She immediately reached around to peck at her back. She ended up with blue dye on her beak. The others turned on her! They cornered her and pecked and pecked at her beak.  It seems the raised nail gets hammered down, not only in Japan but also in the hen house. That'll preach.

Joyfully Penned by DeEtta @ Courageous Joy at 8:20 AM