We are falling into a routine. I spend a bit of time blogging or with friends in the morning. We spend the afternoon/evening working on projects.

There are MANY projects. People don't fully comprehend how VERY short our season is when we CAN work on projects.  We save up $ and energy during the winter/breakup/spring, and when the light hits and the snow melts, we work hard and play hard until the snow flies again.  Personally, I find I don't drop off until after midnight, and I'm up at 0400 most mornings. This seems fairly common. It's the Alaska rhythm. Who wants to waste time inside or sleeping when the SUN IS OUT???? Not I.

Spending our days outside has led to the inside of the house looking, well, less nice. Michael commented we hadn't "company cleaned" for quite a bit of time...::snort::  Since the last week of Life Group. ::Snort:: He's been stuck laying on the couch or in bed with lots of time to watch the inside deteriorate.  I noted Stacia doesn't like being outside all afternoon. She doesn't enjoy weeding, hauling gravel or sifting dirt....and so a deal was struck.  I would let her out of the outside chores if she would do the inside chores. It's working.  It's livable again. 😅

I spent time this morning with a friend at a local tea spot. I suppose it's known more for coffee and vegetarian food....but it was a tea spot for us.  It was lovely. Once again, I didn't take photos.

Let the afternoon work begin!
At home this afternoon? PROJECTS. Michael has been up more since Sunday. He is trying to build up to his big cross country trip at the end of this month. Our goal was to cover our second bed. I had vague hopes of getting the electric fence working for the season...and getting a place for the chicks OUTSIDE of the garage.

Look at those dandelions. As noted before, we are trying to avoid chemicals - it's a Parkie* thing. The vinegar and soap recipes are obviously not working. I'm trying to resign myself to fields of yellow...but this is not the Oregonian way. I will research some dandelion jelly recipes as my cousin, Darla, suggested.


There is usually something animal related to tend to around here.
Alex has been Michael's back and our muscle. He's a hard worker and is making it possible for us to keep getting things done even with Michael's back on the fritz.  BTW, please pray the VA referral for a chiropractor arrives SOON.
For those wondering why everything seems to take us so long - THIS is our soil. Whenever we have a project to do, we have to deal with compacted clay and gavel! 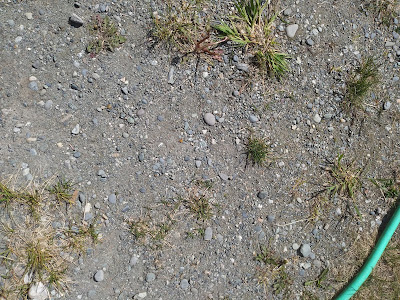 We had sifted the gravel from the garden beds. While Michael and Alex finished the cover, I moved gravel to the greenhouse. I wanted the center aisle filled with gravel. I was happy to have plenty of free gravel to harvest from the garden plot. I also put roof shingles down around the beds - it worked well as a weed block last year between rows of veggies. We have it, and it's free to use.

As we worked, I heard a SNAP! She was back. We haven't named her, yet. She's aggressive. She doesn't seem intimidated by our presence. Her hackles are raised. She came fairly close to the "fence." The t post marks the fence.  We're on the other side working. 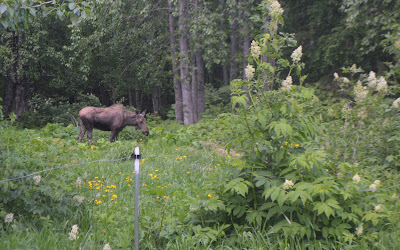 She seemed to get irritated we were in her favorite dinner spot. She stomped off to Stacia's hammock.
Notice the dead spruce tree in the photo above. Cutting all the spruce is another project. We are in discussion with the borough. They will not allow us to cut the spruce beetle-infected trees in the walking easement behind our house. They want us to pay $200 for a permit and then they want us to pay to have the property lines surveyed before we cut the trees....and the trees are theirs. We offered to take them out so they didn't infect the whole area. Red tape is a thing to behold - wherever it is found.


She came back this morning  (June 5th). She's not very big, but she's aggressive. 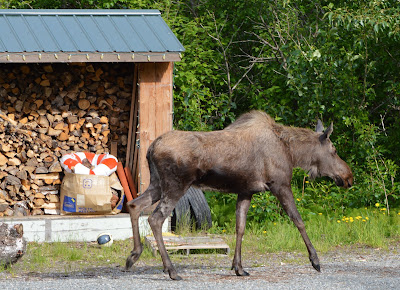 Anyway - we did get both beds covered. Michael changed the design a bit on the 2nd, so he re-worked the 1st. 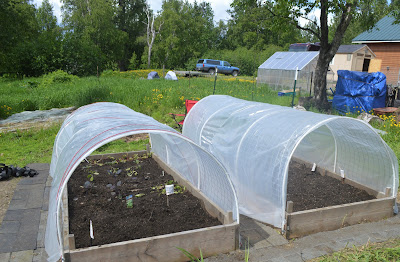 At this point, I was sifting a pile of dirt and mining more gravel for the greenhouse. Alex insisted on taking over. I was glad to let him. My muscles are sore at night. It's a good sore.

The chicks on the outside want in, and the mean girls on the inside want out. LOL That'll preach! 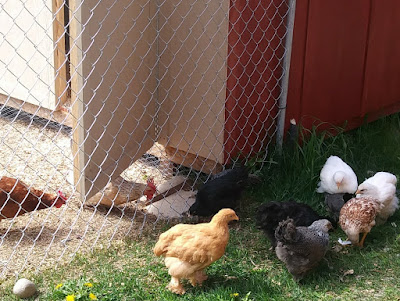 These girls enjoy their dust baths. Their bedraggled, bare bohonkuses are so sad. They keep pecking each other's tail feathers... I can't figure out what to do with them. I took the chicks in when I got them and told the girls, "Shape up. I have your replacements." It didn't seem to help.😏 Michael is thinking of sending  the worst offenders to the stock pot.  Our last hope is that Phoenix, the roo, will be able to establish some sort of order when he's big enough to be in with them. 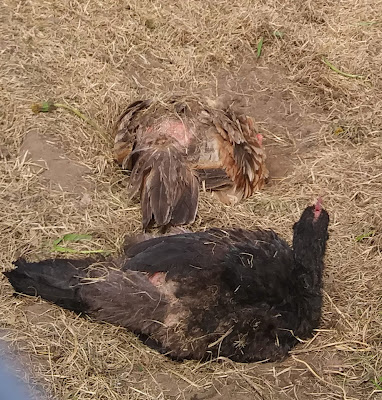 Michael began talking about a trip to the store. I had dough rising and went inside at this point to prepare calzone.  Oh YUM! Veggie for me - meat and cheese for the others. Michael finished a project with string and beans in the greenhouse. 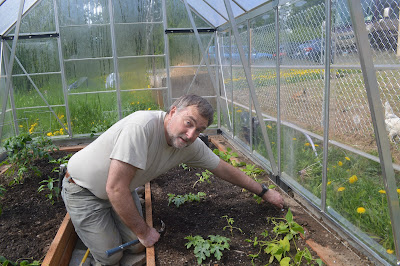 We popped the prepped calzones into the fridge and went to Lowes. Michael points out what he wants, and the kids load it up. 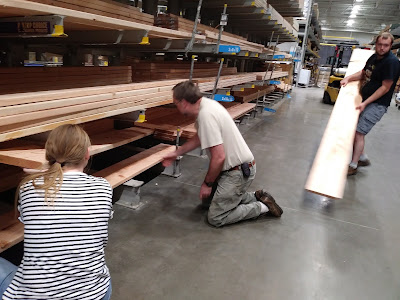 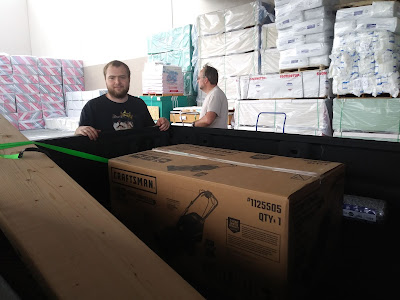 Our final stop was Walmart where we bought a frame and mattress for Dad. Between now and Saturday we need to move Stacia to the study and get the bed set up for Dad.

I popped the calzones in the oven, and we had dinner...finally. Michael needed loctite so we headed to Freddie's to try to find some. No luck.

It was a tiring day - but a productive day.

*Parkie or Parkies - those with Parkinsons.