In my time here in Afghanistan, I figure I have done about 37 loads of laundry.  About every four days, I have a bag of laundry that needs attention.  There is a laundry service, but the idea of having all of my clothes washed with everyone else's clothes (to include t-shirts, socks and underwear) bothers me.  I also noted that my clothes came back with soap residue still in them (hmm, hopefully, soap residue).  It only took twice at the laundry point to convince me that the time spent doing my own laundry was time very well-spent.  You say, "Why twice?"  Because, the first time through I thought I could deal with the "issues."  The second time, when there was soap residue and the unknowns of what was washed with my stuff, I was a believer. 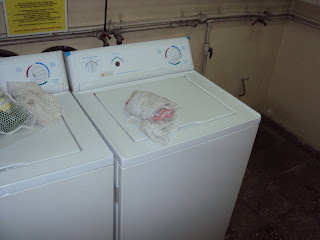 Blessings
Michael
Choosing Joy!
©2010 D.R.G.
~Coram Deo~
Living all of life before the face of God...

I'm with you in thought about this stuff. l/p Mom T.