Storm at Little House in the Rice Paddies

I mentioned it began to snow 10 min after my plane landed. It was a "good" storm. I was glad I had no where to be yesterday.


Last night this warning was sent:


11:30 PM Feb 01, 2012
Aomori Local Meteorological Observatory
Weather Warnings（Misawa City）
[Issued Warnings]
Heavy snow warning, High waves warning
[Continuing Warnings]
Snow-storm warning
It was windy, lots of snow - WHITE OUT - Blizzard. I woke several times in the night to the sounds of crashing as massive snow build up slid off our roof. I finally got up at 2:30 a.m. (jet lag).
I prayed, read the Word, worked on Board Meeting Agendas and PWOC reimbursements....then noticed that my window seemed a bit icy. 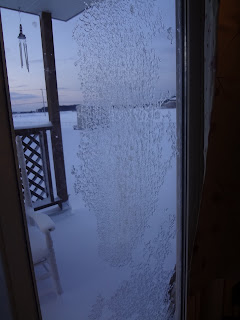 I opened the curtain and discovered a winter wonder land. I also began to suspect I would NOT be driving to base for PWOC.

I found this online on the Misawa AFN FB page, "Good morning, Misawa! The 35th FW Commander has directed delayed reporting until noon. All schools are cancelled. Further delay information to follow at 10:00 a.m."

This is an article on the storm. Pray for Tohoku. We can't get seem to catch our breath up here. BEFORE this storm we were already only 20 in below the winter average for snow.

Here's some shots I took this a.m. Can't wait to see the kids reactions...and Yuuki when she tries to go out.....yes...I was in my workout capris and snowboots and it WAS cold.  These were taken early about 6:00 so still sort of dark.

It IS amazing, isn't it?