I had three outings with three different young women. These were times of relaxing, refreshing, mutual investing in each other and the kingdom. Good stuff....and two of the outings happened at onsens...always good as well. One was the black water onsen. I think Akikosan is right - I think it makes me younger each time I go. ::snort::

Wednesday night was the AWANA Pinewood Derby..... There were a variety of cars....

Stacia's was number 76! Shiny pink with purple flames on the sides and front...


Look at Madeline - the sweet Cubby who won the derby! Chaplain Power. Hooah!
Stacia did not win...BUT in our book she won the sportsmanship award....and we celebrated at home with ice cream for the kids! 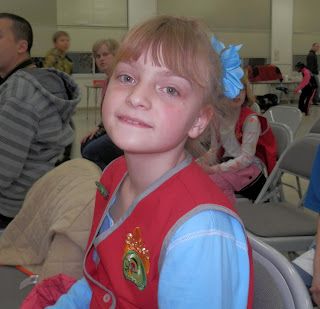 I kept the van Thursday and fit a trip to the commissary in after I dropped Michael at work. THEN we raced to a nearby park to enjoy the Cherry Blossoms. They were just starting to open.  We KNOW if a storm hits they'll disappear.... I'd forgotten it was Golden Week and the parks would be full. Everyone was rather solemn at the park. I imagine they were thinking of the beauty and brevity of life. There were several vans from Senior Citizens homes.  It really was a solemn place...until the G's arrived. I took the two younger ones aside and explained...and then we walked and reflected quietly as well....The older two and I had a talk about how we felt with this being our "last" cherry blossom season in Japan. 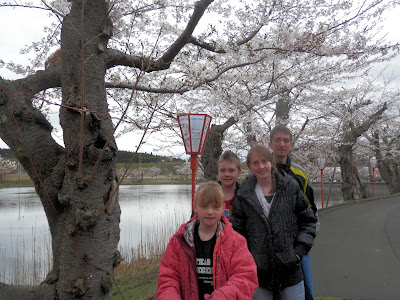 This park has a playground below a hill.....and a tower and campground with walking paths at the top of the hill. We hiked to the top and were the only ones up there...so I let the kids ride their scooters. 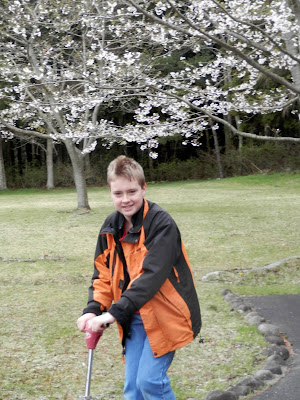 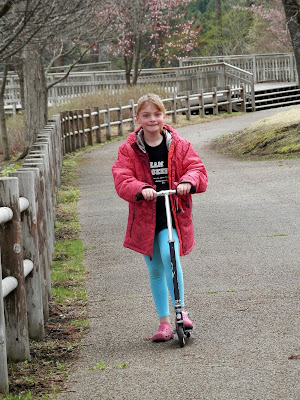 Arielle is getting quite elaborate with the hairstyles she creates for Stacia each day. This was a fun one! 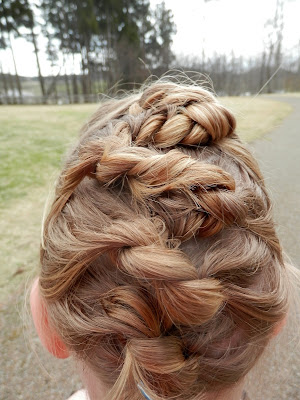 We dropped the younger 3 at home...Nolan watched the two and Arielle came to watch a friend's babies so the two of us could go to Hirahata Onsen. We enjoyed the rare experience of being the only ones at the onsen for a bit of time.

We continued to declutter and clean the house. We still don't have orders but have been promised they are now at AFPC.

We believe the orders are going to come through for Jared to be able to visit for a 1 1/2 weeks in the near future. He'd love to come home one last time before we move.

Thursday night was our last Protestant Fellowship Dinner. These are always chaotic fun! Nate has been sharing thoughts he has on how to hear from God. I found much to process and will do that slowly over the next week or so. It was fun to have time to sit and visit with friends I don't see often enough.

I met another young friend for tea on Friday...and then attended a farewell for our Command Chief and his sweet wife, Terri. They are moving to Yokota AB where I know they will be as big a blessing as they've been here in Misawa.

I simply cannot find the ice packs so when Stacia slammed her fingers in the door I pulled a pound of butter out of the freezer. LOL 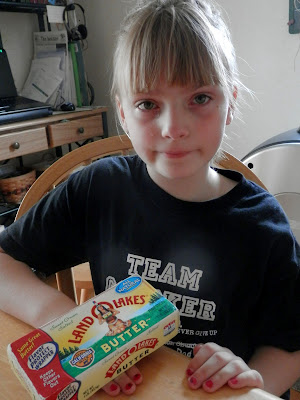 We had thought we'd go to Hirasaki Castle today -even though it IS Golden Week - and see the blossoms....but we received a text via pinger with a link to watch Jamin run in the Lonestar Conference Championships via LIVESTREAM....and that was too good an opportunity to miss.

The older two went to movies and games with Club Beyond tonight. The rest of us popped popcorn and watched The Lion, The Witch and The Wardrobe.

This is a quick recap...it doesn't share the conversations we've been having, the lessons God's been teaching,  or our feelings and thoughts as the time rushes past....but it shares a glimpse.

Joyfully Penned by DeEtta @ Courageous Joy at 4:26 AM

Nolan got his hair cut! I love it!

The pics of all of the kids are wonderful, and Arielle with the cherry blossoms--simply beautiful.

Sorry about Stacias fingers! OUCH BUT love the ice pack you used. :):):) A missionary at heat aren't you!

Sis, we have been thinking and even praying for you all lately. We remember the feelings of leaving a place you love where you are getting to minister. Will keep praying. love/prayers - mom t.