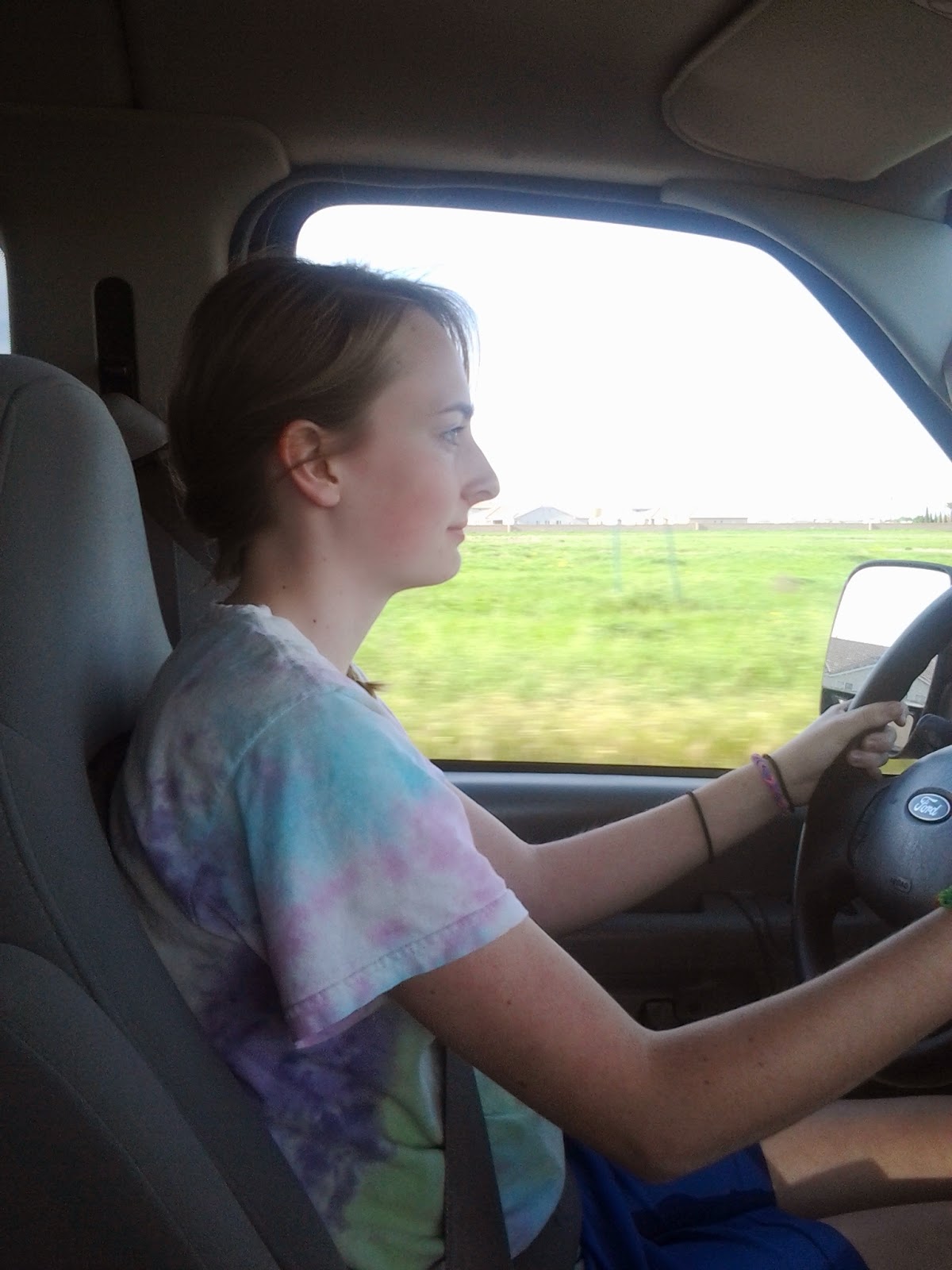 A friend noted today she wanted a chauffeur, a cook and a maid. I'm living the life! I was driven around today by a 16 yo with a driver's permit, we ate leftovers, and I had the younger ones do their chores! I love my life. ::snort::


Arielle has invented a new style of driving - a style I've not seen before - and, yes, she is our sixth to learn to drive.

Arielle jumped out of bed and offered to drive us to PWOC today. This would be 30 min each way. She had a motive.

I was not prepared for the fact that all little gnats and spiders must be helped out of the van or killed before she will touch the wheel!

We started down the road and she was doing GREAT. Until....well..... You wouldn't want to hit a BIRD. 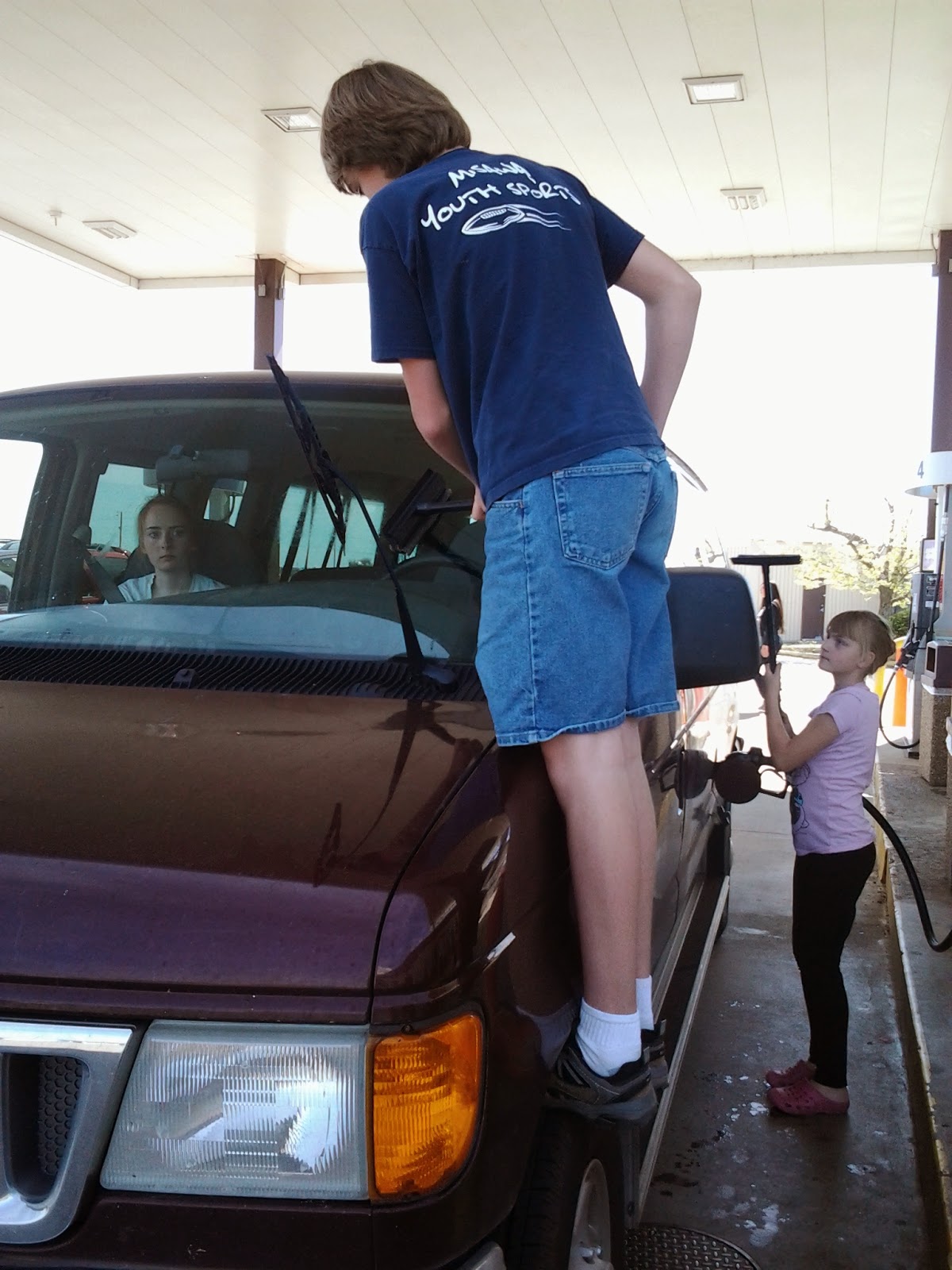 A BIRD? No amount of cajoling on my part would convince her  the bird will fly out of the way!

One would also not want to hit squirrels, rabbits or deer.... It was HILARIOUS.

She  made the gate guards day cheery! It SAYS to go 10 mph; I'm sure most don't. As we pulled up, I thanked them for being gracious and informed them it was her first time to drive through the obstacles....evidently they'd guessed! ::snort::

Arielle drove us around for errands and then asked me to drive into the gas station. She took us out and home.....

Why didn't *I* ever figure out this is the way to reach the top of the windshield if you are under 6'4"?

There was ONE moment (which she has told me I can share) on a really bad road...without a shoulder...where she got distracted by cows, birds and a curve and went off road....I was terrified and yet....pleasantly surprised to see she did NOT over-correct and got us going right back down the road. We were both laughing....

BTW - in case you are wondering - an ECO DRIVER brakes for TURKEYS! ::snort:: 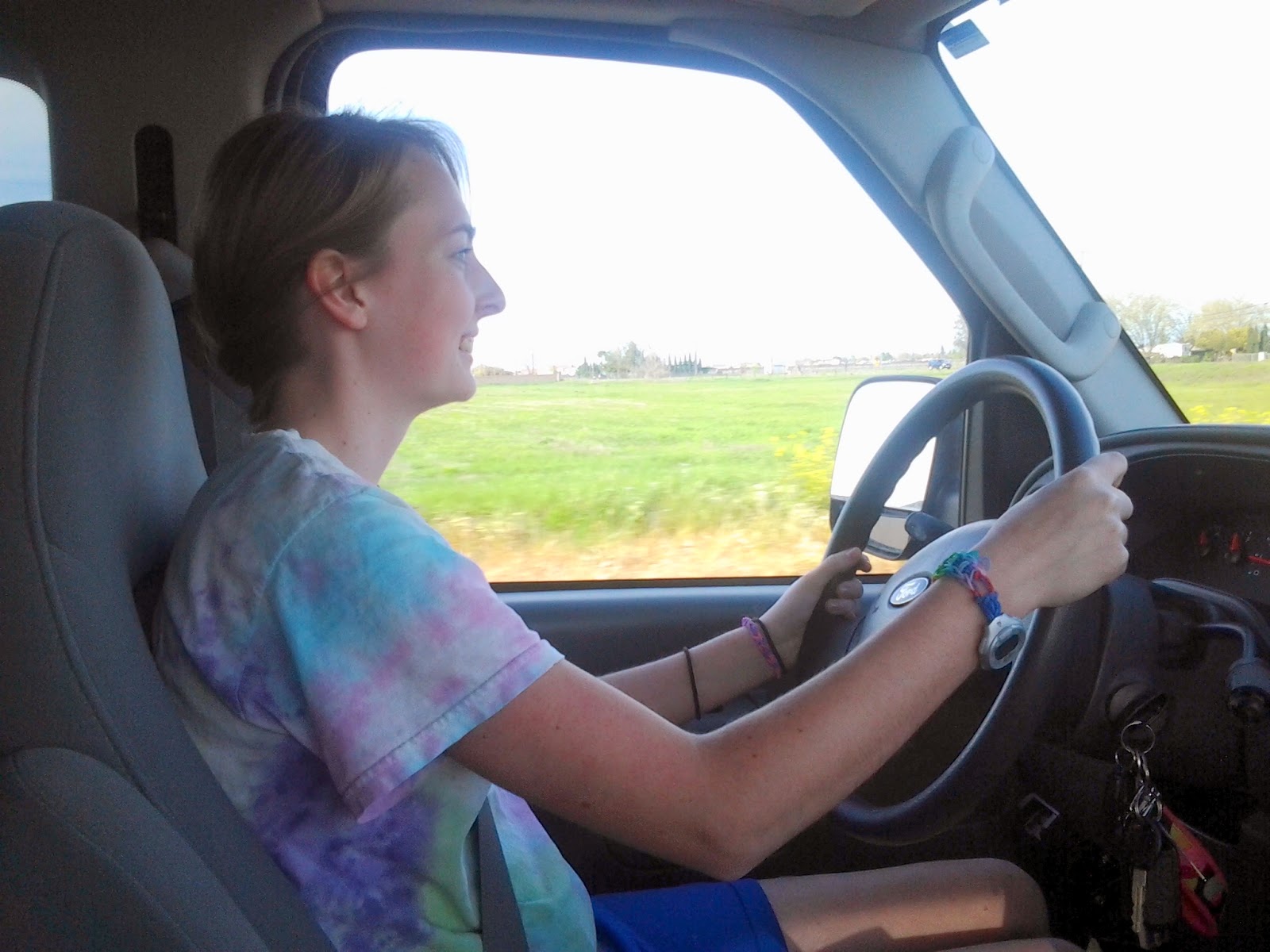 Arielle drove us BACK to base tonight for Bible Study.  She's a great sport and the other kids were fairly cooperative. Stacia HAS taken to calling out speed limits and shoulder warnings for Arielle. ::grin::

Below is ONE of my most humorous memories of the day....wouldn't every girl want her first days of driving to be celebrated by a staff of chaplains?
Evidently, Ch. S, saw I was about worn out being the driver in charge......He explained to Arielle the difference between turning and cutting a wheel when backing up. LOL 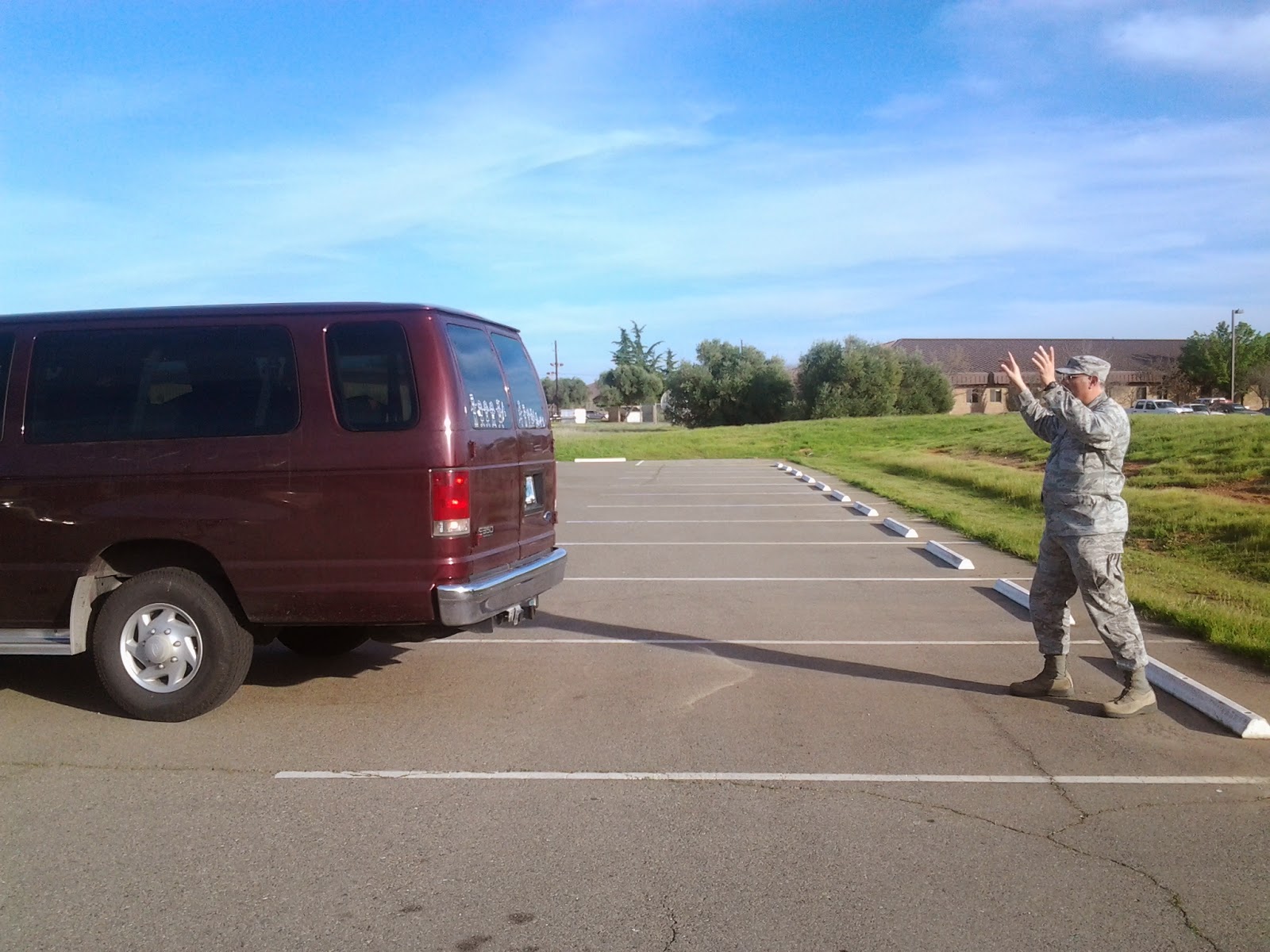 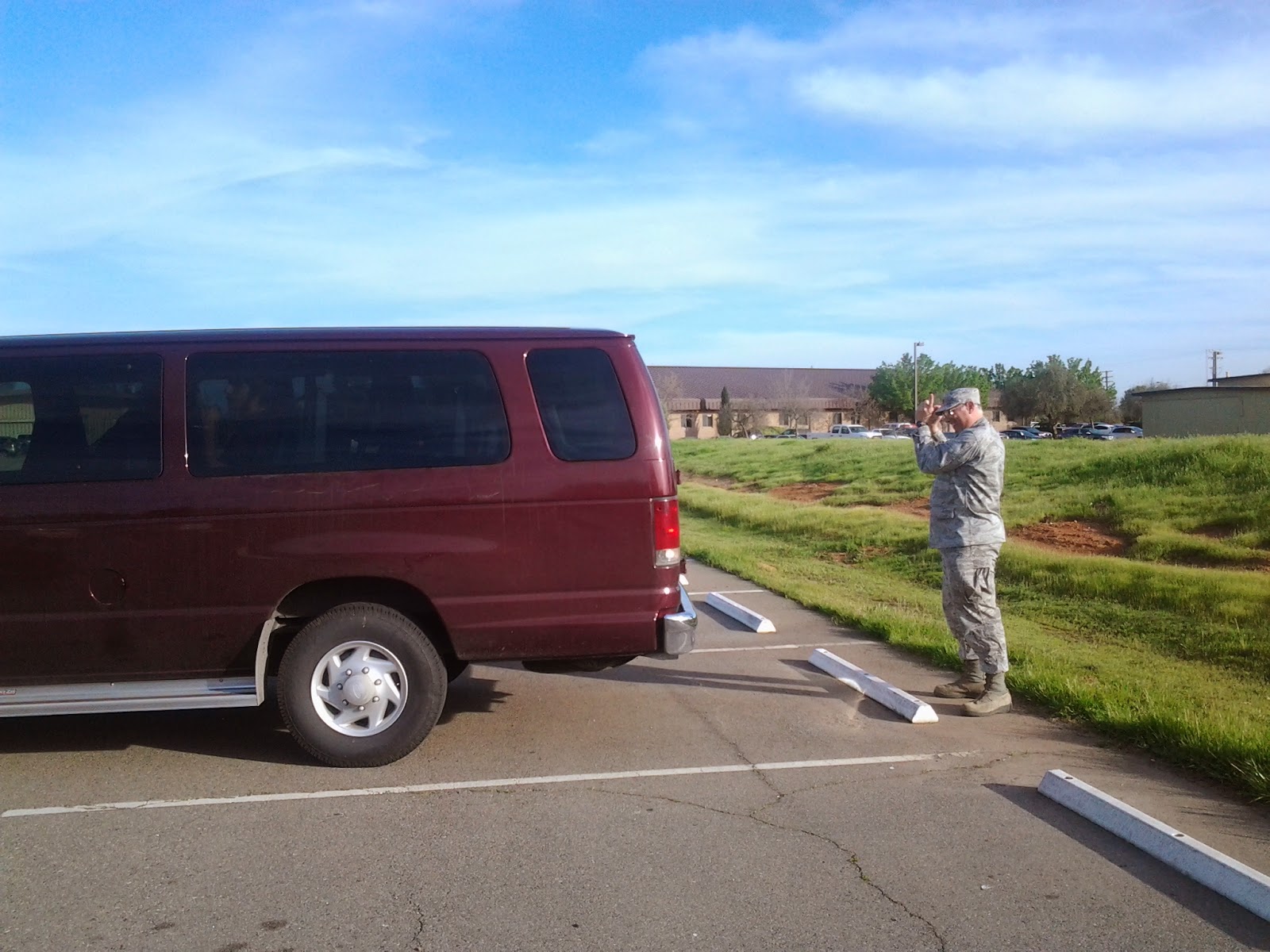 She actually did a great job parking - it took a bit of time -  and a village!

HI: OK! I have to comment on this post. AWESOME! Sis, sounds like your past experience in kids driving has served you well. What a nice chaplain to help teach Arielle how to back up. :):) Bet she is going to get all her time of driving in rather soon......... before summer if at all possible :):):). love/prayers - mom t.