Stacia has composed, and loudly sings, a song about this day. "This has been an awesome, awesome, AWESOME day....."

Just what has brought out her latent "Disney Musical" gene?

The day began like any other....until Stacia came screaming into my bedroom, with a blood-soaked paper towel in her mouth and blood streaming out around the corners. She HATES blood. She tends to panic and we've been working on it.....What in the WORLD?

I checked. Yep, over half of it was loose. It wouldn't come out and needed to be pulled.

Here's my deep, dark mommy secret.  I've had nine children and I have NEVER been able to bring myself to pull one of the kids' teeth.

I called for Arielle. She seems to have inherited my squeamishness. Nolan was still in bed. I was entertaining the idea of driving to base and getting Michael or one of the Chapel staff to help...... Then I had a brilliant idea.

"Zander, can YOU pull Stacia's tooth?"

"I've never thought about it. I suppose I could."  He seems a bit too happy about this situation. 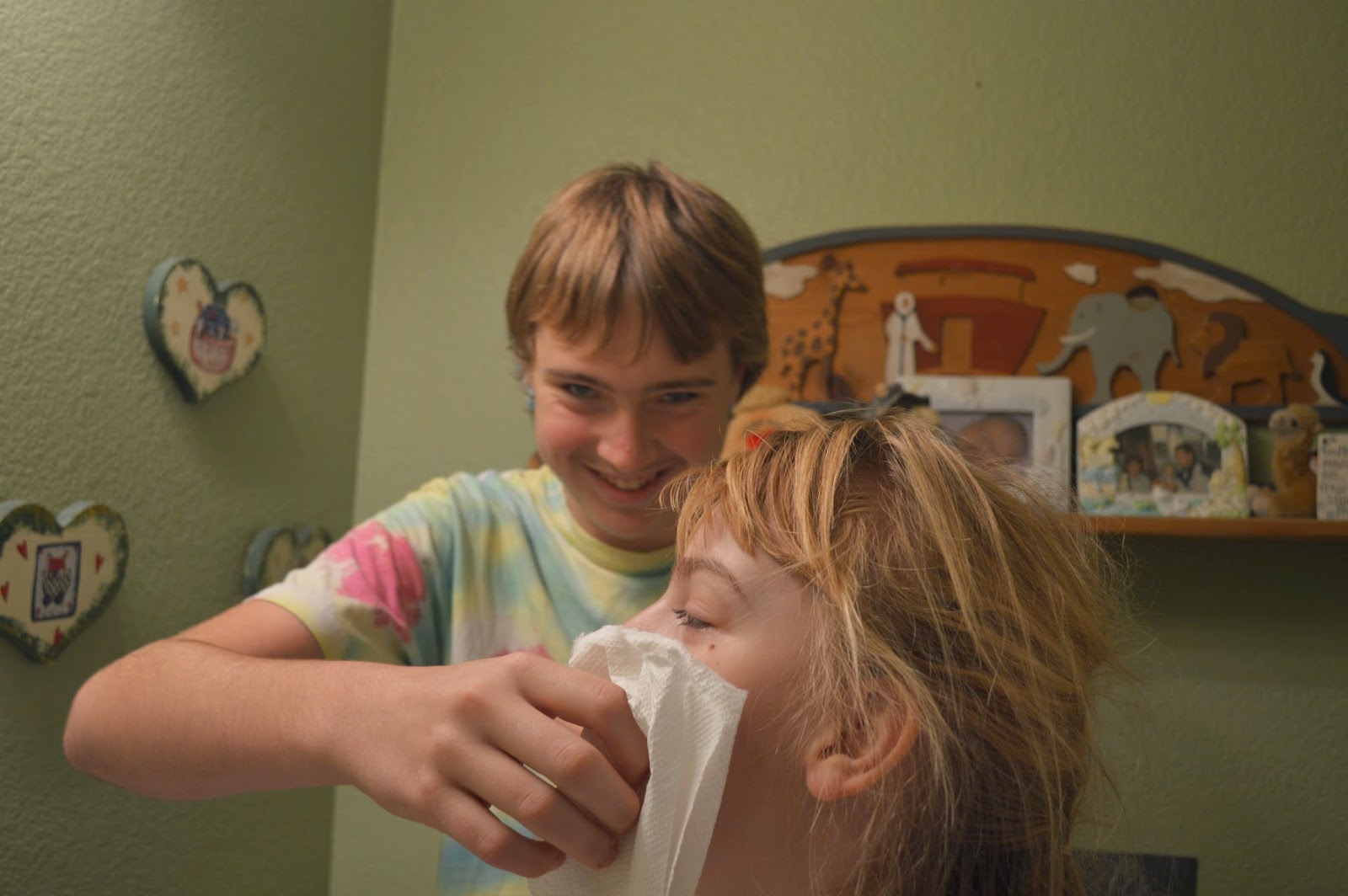 This is staged. Are you kidding me? I was out in the hall way plugging my ears and cringing - with Arielle.  Zander's the hero. See the empty spot..... 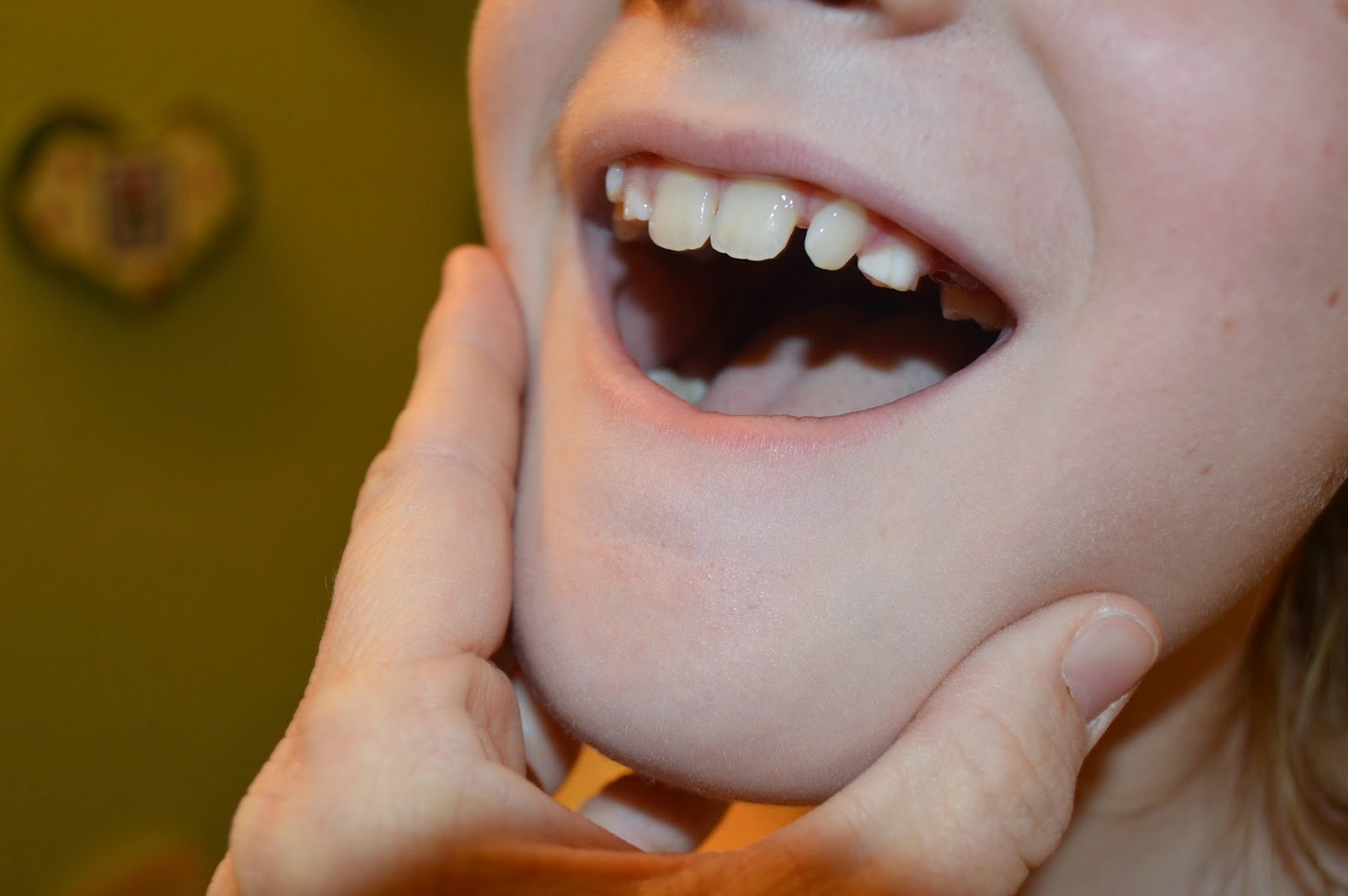 It rained all day. I'm learning it's best to stay home when it is raining heavy in CA. It's not that I can't drive in the rain, I AM from Oregon after all.....it's that you can't trust the other drivers.  BUT Arielle had a driving test today, I needed to buy some things for the Christmas Tea......

The driving instructor was to show up at 0900, do a brush up hour with Arielle, and then take her to the DMV where she would take the test in HIS car at 1000. At 0915 he wasn't here. I called. They'd forgotten. He finally arrived at 0956. They went to the DMV and he wrangled a new appointment time - which kept changing. Arielle ended up driving around with the instructor for 2 1/2 hours. 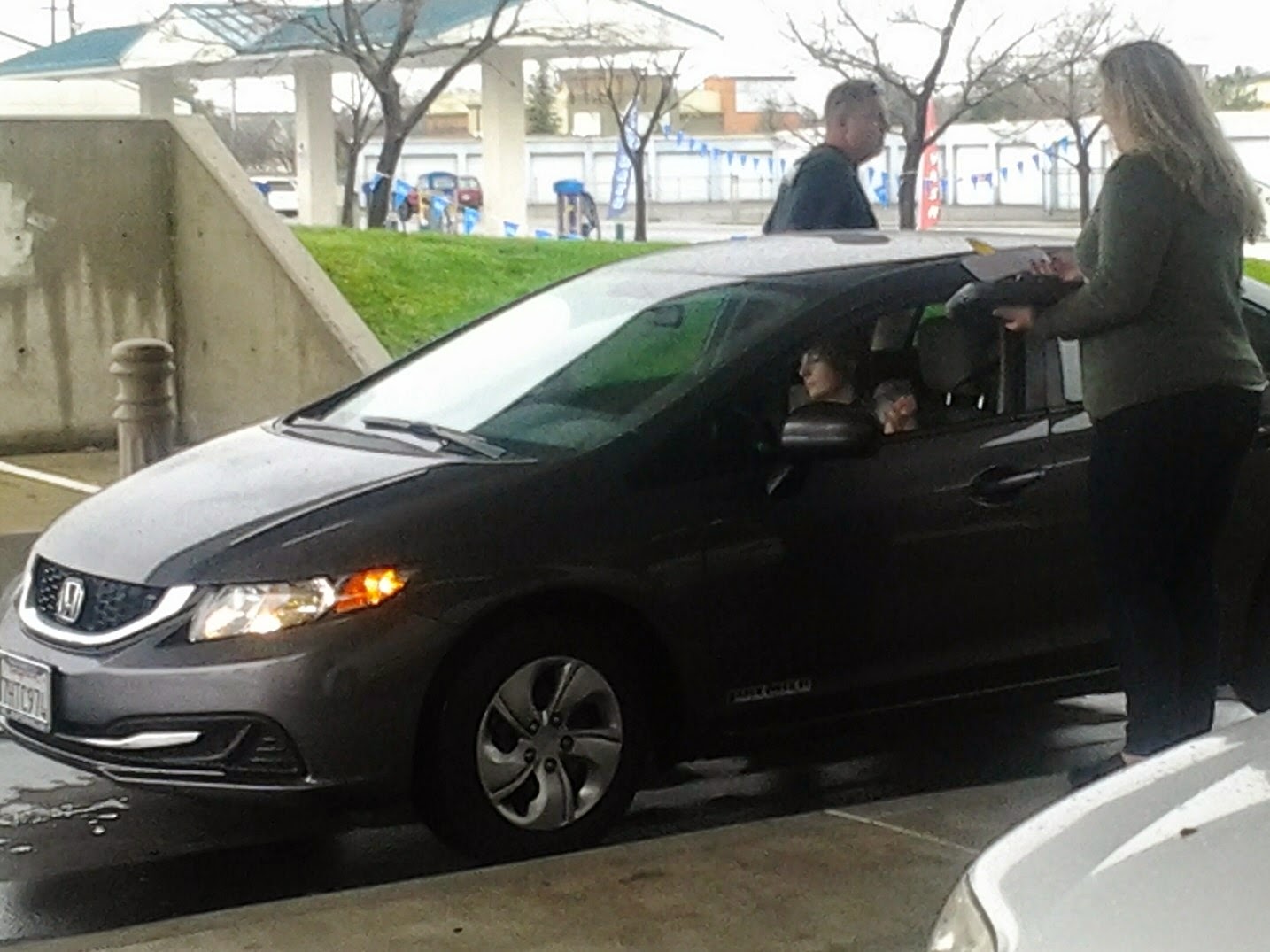 Stacia and I went to Target and bought stocking stuffers and pretty plates and napkins for "the Tea." We arrived at the DMV just as Arielle was leaving for her test. It's key to know that the driving examiner was new to her job. Scott, owner of the car Arielle was testing in, sat and talked with me as they drove. He told her not to take out her anger at the missed appointment on his student.  Scott there at the back in, Arielle in the car.....

The first thing she did was fail to stop or signal as she left the parking lane. Um....Scott freaked out.

"That's an automatic fail. I warned her about that. She's a great driver. WHY is she doing this?"

"She's rattled, her appointment was scheduled for 3 1/2 hours ago."

I could tell she was when we saw her. We gave her a thumbs up before she left and prayed. It seems Scott had told her just before she got in the car that if she failed, she'd have to wait until April before there was another open appointment. Um....way to rile her up. ::snort::  There is a new state law here that will allow illegal aliens in CA to apply for driver's licenses. It goes into affect 1 Jan and the DMV appointments are full....there are also many new computers so one can take the test in Spanish.

They didn't turn back and so we hoped for the best. She only missed 4 points. She did great once she got out of the DMV parking lot and settled in to driving.

I was thinking this a.m. that I got my license and got into an accident the same day.....it was raining....she was tired....she suggested I drive. I did. This is rear bumper of my van....after being smashed into while at a stop sign.....just a bit of damage. 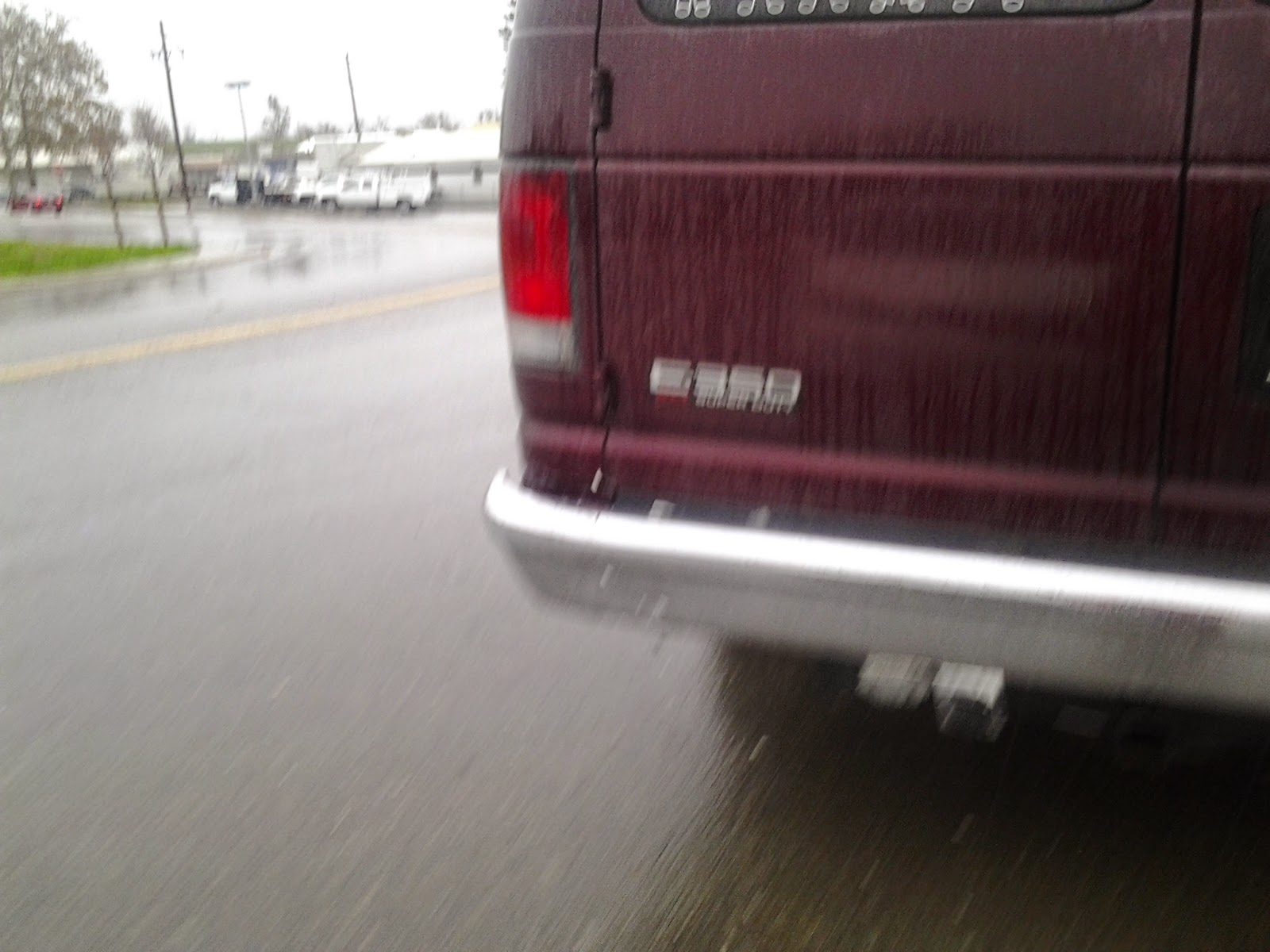 This is the front of her car after smashing into me....she said she was going 15 mph. 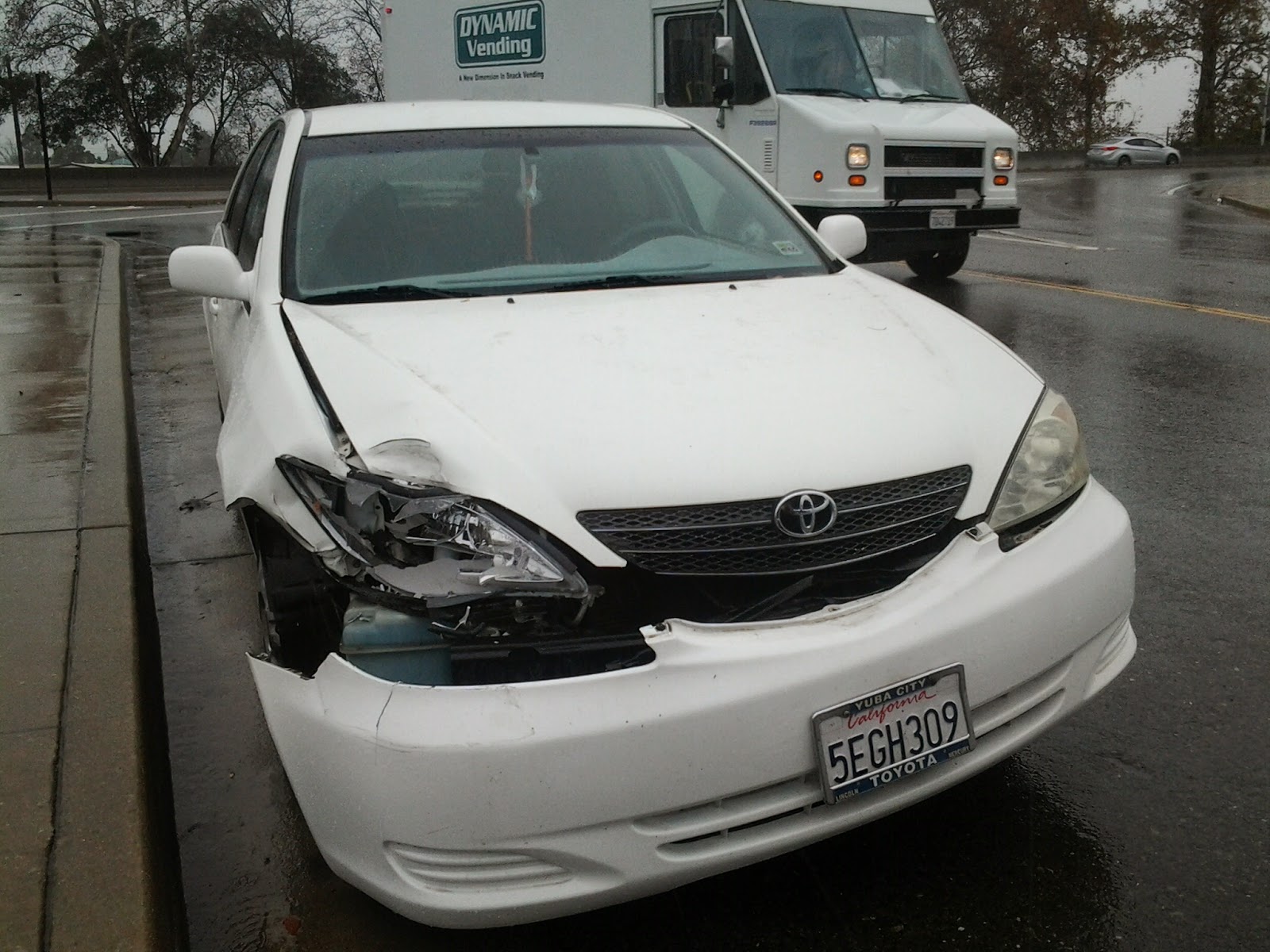 I felt so sorry for her. The police came and we exchanged info. We shall see what happens. I was glad I was driving. It was deja vu.

We finally made it home at 3:30 p.m. and I had 2 hours to make some Lentil/Mushroom/spinach hot pockets and a salad before we headed for the 2014 Chapel Staff Christmas Party - that's another post.
Choosing Joy!
©2014 D.R.G.
~Coram Deo~
Living all of life before the face of God...

I am glad we don't live in CA. Appointments for tests? Crazy. Is that an organic vending truck?

That is so weird about the accident afterwards! Congrats to Arielle (I had to go back and read carefully to be sure that she passed!).

And haha over the staged pictures, I love that!!

Here in AL, no driving test happen if it's raining or the roads are wet.

congrat's to Arielle! Glad the accident was no worse. I like the ways Renee's state does when it is raining.