Whew...o.k. We have determined not to leave Beale AFB until Michael has had all his initial VA medical appointments. We are praying they will take the word of  Dr. Lee, the neurologist reports etc and NOT schedule follow up appointments requiring us to stay in CA.


This "VA disability claim process" feels like THIS as we walk it out.
However, THIS week we took a big step forward! We entered the Sacramento VA center for Michael's first appointment. They sent him to the pulmonary clinic. His medical records indicated he's had bronchitis and pneumonia - so off we went.  She did tests, did an inhaler, did more tests...and said we need to buy an RV I can drive. ::snort:: An unexpected directive - but o.k.

Michael has begun a patch of Neupro. Some of the side affects are downright frightening - the one which concerns us most? Sleep attacks - narcolepsy. While he's adjusting to the meds - I ride with him to Sacramento. I'm not sure what good this will do in case of a sleep attack - but it makes Michael feel better to think of us both dying on the freeway. ::snort:: Having just read this to him, he's decided I should be doing the driving. More terror on the highways as he hates to be a passenger, and I'm not too fond of Sacramento traffic.


Some have asked why this process takes so long....here's a snapshot that will shed some light....
Each claim is about this size...and yes, we do still turn in PAPER copies....Michael's are about the size of the one with the black strap. These have to be gone through and acted on......and I don't want to think of the mess of this photo.

Michael was a bit embarrassed, but I used the opportunity to find a rep to chat with. I asked him just how long from this point they thought it could be. He assured me the average is six months from the date the claim is filed until a determination is sent. By those dates, we should have a determination by 1 May. I asked him WHERE we were in the process - because it FEELS like that tangled mess above. 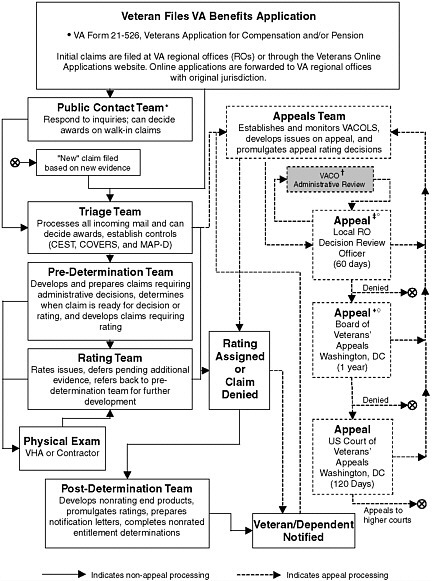 From the conversation, it appears we are on the left side at the Physical Exam portion. Our claim specialist will wait until all the doctor reports are in (last appt is 28 Mar), then she has a "set number of days" to make her recommendation to the regional office. They then have a "set number of days" to make a rating determination and inform us.  He would NOT come clean on how many days they each have...but it is a bit doubtful we'll know by 1 May.  Now, after we are notified - bottom center of chart - we have the option of requesting it to be re-evaluated, which sends us to the top of the right hand side of the chart.  We've been told by everyone to expect we will need to ask them immediately to re-evaluate. I hope not and am praying they just come back with a fair determination from the start. We've been told they low-ball what they think you should get.

There it is - all you've ever wanted to know about the VA Disability Claim Process.

Still continuing to pray all the time.

Narcolepsy.... I have finally gotten to the point where I know when it is time for me to STOP.

When I went to fill the prescription for the medicine after so many months we were shocked at the price. Guess what I have found to do the trick for the last year? I don't like coffee, use to much sugar in tea, and hot chocolate's caffeine just does no good.,,SO when I want to stay awake etc I just take a "caffeine pill". works SO GOOD.
Today I can't fall to sleep at all so I am keeping up with it all.
Guess What? I can take a pill to stay awake a little into the night and still when I want to sleep all I have to do is stop. :):):):):)

Praying for you and Mike though cuz we want the best for Mike and also You and the kids.

love/prayers and see you sooner than later. mom t.