Picking up the Damon

It is always a blessing to catch up with former colleagues and friends. We knew Tim and Jill at Goodfellow AFB. Tim was the PAC (Parish Advisory Council) president and Jill was the R.E. (Religious Ed) Coordinator; Michael was the Sr. Protestant Chaplain. We could have spent days talking. I LOVE their home....as I mentioned before. Here's a shot Elizabeth, their daughter, took of us. 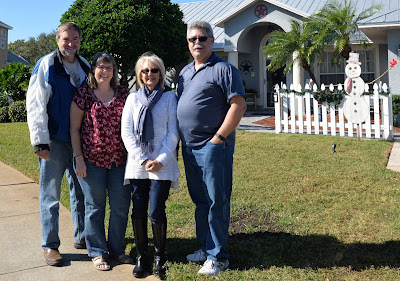 We are in Florida to pick up our new-to-us Damon Astoria 3776. It's a 2008 38 foot Class A Diesel Pusher. It had one owner for 7 years and then John and Laura purchased it a year ago. They put it on the market in June or July, I believe. Michael began communicating with them in July. At that point, we felt our finances were a known - we were simply waiting for the VA disability retro pay so we would have a down payment and feel more comfortable with the purchase.
Many know we are a Dave Ramsey family. After much prayer, shopping and discussion, we took out a loan. We did this as


Having decided to take out a loan we still wanted a GOOD deal which would allow for a small payment, reserves for repairs and the ability to sell for what we owe in a few years if need be.  John and Laura's lifestyle had changed, they were ready to sell and it didn't sell through the summer as we waited and waited for the VA payment we expected in July.  They had reupholstered the driver/passenger seats, installed a turbo charger on the engine, and upgraded with  four flat screen TV's. It has bunks, storage, the engine Michael was looking for and we bought it for 15K below blue book....

We had the Damon inspected, qualified for a loan, put down $ for a purchase option and today we picked it up and met John and Laura in person. We all signed a Bill of Sale. This is not strictly needed, but as we are making a cross-country trip before the Title arrives, USAA recommended it...John and Laura showed us the ropes and transferred keys. 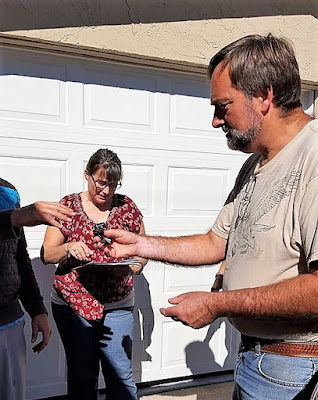 Before we blinked Michael was behind the wheel and we were heading off to drive back to Oregon to show the Gherkins their new home on wheels. 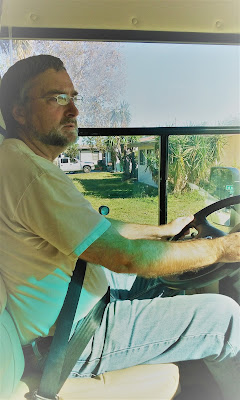 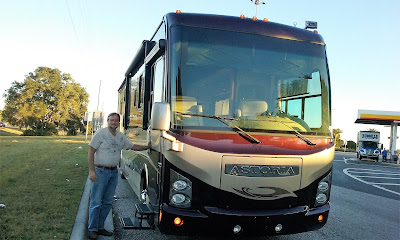 Jill is one of the sweetest women I know. She thinks of EVERYTHING and gave me some white roses for our new home on wheels. They have made me smile every time I see them. 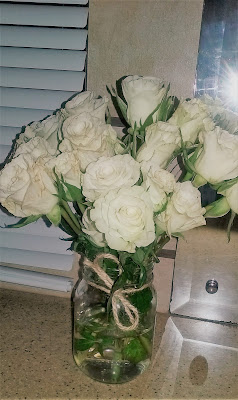