WOW - Check this out!

There is no doubt our fall schedule - out of the home five nights a week; something scheduled six days a week is busy - but we were handling it well...and it's easing up already. (This week we finished pre-marital counseling with a lovely young couple...so now we have commitments four nights of the week....its the start of margin).

BUT....the reason for the absence of posts has more to do with the incredibly SLOW laptop I had.....it took Stacia 30 minutes to simply sign on to her Facebook page!!!! It took about 20 minutes to turn the computer on. Things would go missing. Grrr.....and yet....I kept posting.....

UNTIL I injured my shoulder about 4 weeks ago. I couldn't type or text....or really sit still even. I hadn't been in pain that required movement since labor 14 years ago.  I went to the doctor and was given a shot and muscle relaxants and told to alternate a couple of anti-inflammatory meds around the clock. The drugs made me sleep and I slept the first week away. I felt a bit better by the second week, but still couldn't type and was doing all I could to simply complete school and prep for Bible study, attend pre-marital sessions.....I felt good this Monday and had a doctor appointment. I avoided a shot as I could do everything requested of me in the exam....but after all the manipulations, I couldn't sleep again Monday night.....and was back taking 800 mg of Ibuprofen every 8 hours..... I also can't SLEEP for more than a couple of hours before the pain wakes me up....but THAT is MUCH better than the past 3 weeks when I couldn't lie on either my side, or my back, without pain. I've been sleeping in "my" recliner in the nook (Mom's old recliner that Dad brought up).....streaming Netflix and reading to get my mind off pain.  This is week four - and I am still in pain....but it's more of a dull ache. I have been told to go back on the meds if it hurts and to avail myself of a hot tub - which I don't have. ::snort::

Michael had an appointment in Anchorage on Wednesday.  I stayed home as I was doing some serious Thanksgiving prep. He came home with TWO gifts..... 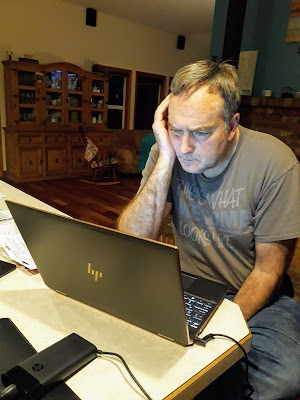 LOOK at this thing. It has a GOLD lid....and it is fast. Michael told me it would be the fastest computer I've ever used...and it is.  I was NOT expecting a Cadillac of laptops - I'm used to the Pinto of laptops. It's an I7 HP Specter. It SINGS....I've been told it has plenty of space for graphics and will be fast for editing videos too. It seems some would like me to get the YouTube Channel running again.....It took hours to edit video each night and I wasn't very good at it....but maybe I will agree to a weekly update. We'll see....first I have to transfer everything from the slow computer and return it to IDEA (Our home school charter program).  The speed amazes me! Our computers were very fast in Japan. We can't get those Internet speeds in the states (at least as civilians).....even with our sluggish Internet up here under the mountain.....this is as fast as our computer in Japan - maybe faster.

He also came home with THIS - a total surprise.  The color printer has been down for months and Michael was researching buying a new print head or a different printer. It made it difficult to work on graphics for women's ministry AND impossible to print photos for his sister.... 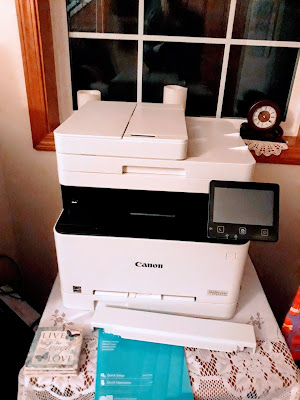 This is a Color Laser printer/copier/scanner.

I'm motivated to work on the computer.....but first....I will work on RETREAT SESSIONS..... I don't think I've shared  I will be traveling to Mt Hermon Retreat Center to speak at the Travis AFB PWOC retreat the end of January. The computer has been so slow I've been handwriting my session notes. It's been frustrating to come back and not be able to ready what I'd prepared.....because when I get on a roll I write too fast to be legible. I'm set now. I thought I'd be escaping from the snow when I flew to California.....hmmm....no snow here. I GUESS I NEED TO MOVE TO ARIZONA!!!