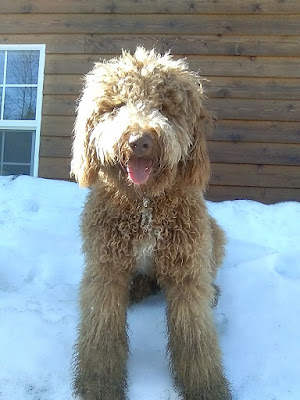 We didn't want to cut her hair (as opposed to fur - she has no undercoat) in the winter as she always shivered and acted cold.
When spring arrived it was time to get a hair cut. They couldn't get her in for a cut until June 1st. Her hair was getting matted. We cut open one of her dread locks  and it was full of dirt and twigs. She was miserable. We did what ANY responsible pet owner would do - we began to snip off the matted locks.
She is now the oddest looking dog I've ever seen. We began on her legs and hind quarters. It looks like she has a creeping disease, but...it's June 1st and we were finally able to drop Millie off to get groomed. 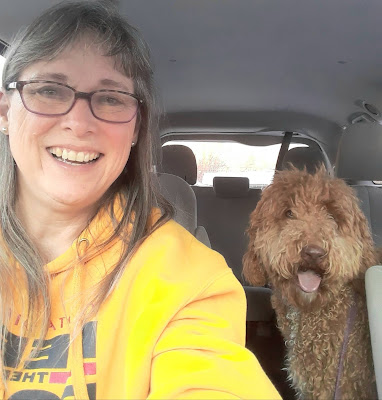 We were a bit worried she would misbehave for them. She's been quite a handful lately.  They asked if we wanted to leave her face and tail long (which is a labradoodle look). I explained the problem with the dreadlocks. They said, "Oh, you want a fresh start."
Yes, that sounded right.
I picked Millie up and MY WORD. I didn't recognize her until she barked. She STRUTTED OUT TO THE CAR.  Have you ever seen a dog strut? She was QUITE taken with her new look - bows, bandana and all. Her poodle is shining through with this new style. 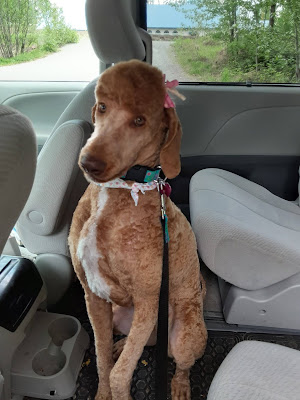 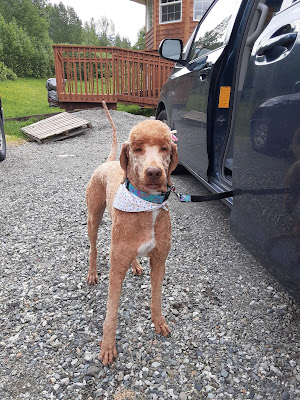 We made several observations after we got over the insane amount of doggy primping going on..... she is MUCH less aggressive. We think this is because she can SEE so much better. She isn't surprised by hands reaching out to touch her (G G).  She is also not as SCAREY to others and so they react differently, which causes her to react differently. AND the incredible amount of training Stacia (and Allie) are investing into her is paying off. She is getting much better at obeying... though she does NOT want to sit with her new sleek hind quarters. LOL
Stacia doesn't like this length at all - but it is sure easier to deal with during this time of year with the woods around our place. 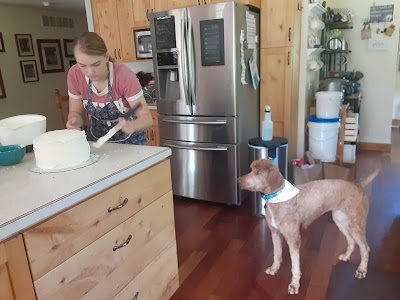 Millie is still Millie - even with a new style. She is always at hand when one works in the kitchen. She loves to bring her toys and drop them at my feet as I attempt to cook a meal. LOL 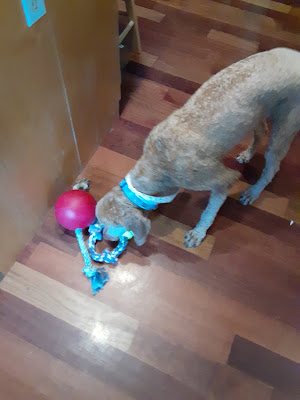 It's been a fun year with Millie. It's about time for her annual vet visit.