"Favorite" Son to My Rescue

There was a night this week when I needed to be out of the house in the evening. I knew it would be a busy day and began prepping dinner EARLY in the day. Before 0900 I had pie crusts made, chicken and veggies chopped.

The day was as chaotic as predicted, still I had time to get home from Dad's appointment, throw dinner together, and eat before leaving for Bible study. Until, in the midst of making dinner,  I somehow turned the oven off. I suspect this happened when I checked the pies 30 minutes into their baking time.  I reluctantly had to leave without any of the Country Chicken Pot Pie.  Both boys were home....I suspected I wouldn't get a piece.....

I debated who would be most likely to READ a text sent while they were eating....and texted both girls. "Please make sure I get a piece of pot pie."  Check out this photo....it appears my "favorite" son had grabbed me a BIG piece. It's a beautiful sight....my favorite dinner, on my favorite Polish pottery plate, going into the fridge! LOL  It's been fun having Nolan home two nights this week.

I came home to this....Grandpa and Alex had gone to bed....these were in the midst of trying to get themselves out of a fire. I think they failed. I was focused on my pot pie and missed the finer points of the game. ::snort:: 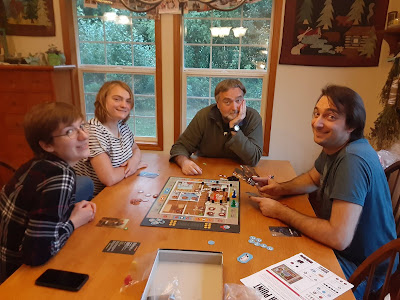 The moral of this story is - be sure the oven isn't turned off when restarting the oven timer!  As for that "favorite" title....they all carry it...and they know it.

Joyfully Penned by DeEtta @ Courageous Joy at 8:38 AM