It did not rain today!
Michael and Alex went out for their lunch study. Michael stirred the peanut butter - which we GREATLY appreciate. 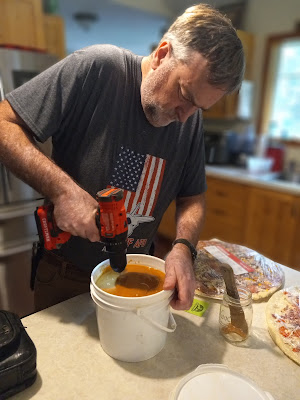 Insert imaginary photo of friend and I at the back table of our little cafe.

I left for a bowl of amazing mushroom soup with a friend while the girls were discussing a run. They made it out.

There is snow on the tip top of our mountains - again. It first hit early in August and has been coming and going with the rain. I suspect we're going to have less rain and the snow is going to stick, soon. The fireweed is all dead. 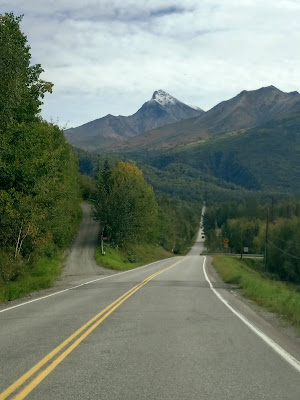 More and more leaves are turning yellow and I'm ready to concede to the season change.  I'm NOT ready to put up the fall tree. Last year it was up from Sept/Oct - May.  I'll wait until it's dark enough that I MUST have the lights on the tree.
While the guys were out, the girls finished school and GG napped, I spent a few hours working on paperwork stuff for women's ministry. I worked on a newsletter and a brochure for next week's fall launch.
Dad does a thing.  He ALWAYS asks for seconds or thirds. Always. It doesn't matter if we put four pieces of pizza on his plate, he will ask for more. This holds true with any food. I have told the family to resist giving him double to begin with as he will ask for seconds. I forgot to start him with a single serve this evening....and sure enough, after eating a plateful of pizza he stated, "I'll have one more."
Michael surprised us all by bringing him back a sticky note with "1" on it. Dad WAS laughing before I got the camera. LOL 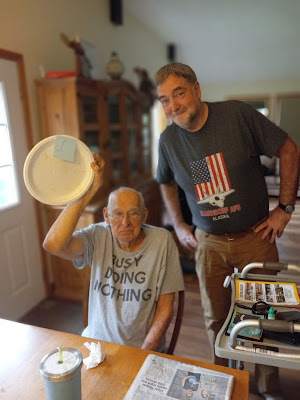 After dinner I found this note on the fridge. It could have been from Michael, Allie or Stacia...I tracked it down. It was from Allie.
It's a race to see if any of the pumpkins will mature in time. I guess I need to start them earlier next year. Yes, I KNOW there is a 2000+ pound pumpkin at the fair...and mine could be too if I heated a greenhouse,  slept with it, played classical music for it and gave it a daily milk bath. ::snort::  It's not been a good year for our squash. We should be OVERRUN with squash - several varieties. We are eating lots, but certainly not overrun. 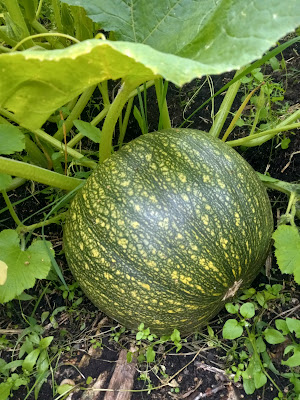 I planted Scarlet Nantes and these New Kuroda carrots this year. We've been eating the Scarlet Nantes and they are good...tonight I picked a couple of the New Kuroda to see how they are doing. They are much darker in color and have a sweeter taste. We'll continue to let them grow until we've eaten all the Scarlet Nantes...and maybe we'll have some to freeze.  I'm debating starting more in the greenhouse and seeing if they will winter over and come up early spring next year.  I plan to start some greens in the greenhouse now and stretch out the season with baby greens. 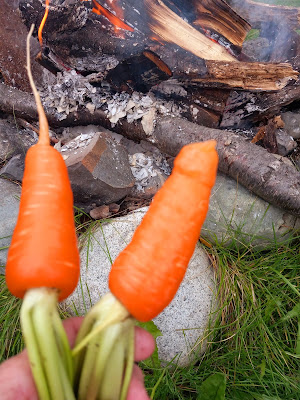 It IS a great year for mushrooms! 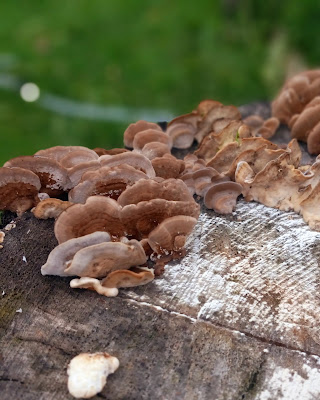 Michael and I joked about the girls. They finished their respective school for the week and spent the afternoon in a writing competition.  They continued on after dinner. Michael and I went out and started a fire. The girls came out. This left GG alone and he makes poor choices when alone. Michael went back up and started a James Garner movie for him. That worked for a bit of time.

We fought off midges, watched flames, talked, and made smores. 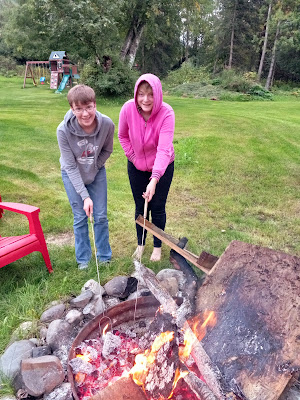 Yes, we ARE burning a broken pallet and the end piece of the old compost bin,,,I'm told that does not make us rednecks. I went in when the view from the window showed it was time to go back to GG.

I did warn the girls not to tip over the playset. The grands would not be happy with them if they did.

We ended the night with an episode of Monk. We headed to bed and a few minutes later there was a tap on our door. The girls were having a spa night and invited me down. It was so very tempting, but I opted to crawl into bed instead this time. LOL
Allie sent me this video clip. Seriously, it may be safer if they keep up the writing competition. ::snort::
It's FRIDAY and we have a long weekend ahead of us. We have no plans...except to jump outside for various projects in between the rain. We don't have a great push to visit the fair this year. Maybe, maybe not.