So, there was a reason Jared and Larissa missed his birthday celebration though they are in town this year. It has got to be the best reason ever!

This child we prayed for for so long was about to make his entrance! It was quite an adventure filled with twists and turns which culminated in a trip to the hospital on the 20th and an emergency c-section early on the 21st.

Not every gal gets a sister in the labor and delivery. These two ladies are such a blessing to our hearts and our family. Carrie, Josiah's wife, works as a nurse in the Mom and Baby ward of the hospital.

Noah Michael Warren made his ARRIVAL! Here is his first OFFICIAL photo (though I will share a ton below).  Noah - such a beautiful answer to prayer...JaRissa prayed, family prayed, fasted...when the doctors said, "Not likely," God said, "I have a plan." An odd bit which has made it's way into family lore involves one of Larissa's trips to visit family down below a few years ago. In the AIRPORT a man came up to her and prophesied she would have a baby. Here, years later than Jared and Larissa planned and hoped for, is the answer to their prayers.
About those unexpected turns...both Larissa and Noah are fine. They are resting at the hospital where Carrie can keep a good eye on them. ::wink::
I was working away on family day prep and didn't catch photos as they came in.  THIS is the first photo I saw of Noah. My response was "WHOSE baby is that with all that hair?" Followed quickly by, "That's OUR BABY, he has the Gherkin scowl!"  After hearing his birth story, I think he is allowed as much scowl as he wants. I certainly wouldn't have been happy with the experience either.
We were all prepared to wait to visit until they were home, but Jared and Larissa invited family to come visit on Sunday....We were not the first to make it to Anchorage...but we did make it to Anchorage. I have decided to share photos in chronological visit order... A huge thanks to Larissa for documenting the day so well. LOL

Remember those early moments when it seemed almost inconceivable you could be a parent?  BTW we found Jared watching his first Cowboy game with Noah.

We finished at church and decided to go home rather than eating out.  We pulled out leftovers. GG was making noise that he was awfully tired. We enlisted Alex to keep an eye on him and the girls, Michael and I FINALLY left for Anchorage. Nothing was going to derail this trip. LOL
We had our own little adventure finding their room. The hospital is a maze...Michael and I ended up in Labor and Delivery. The nurse was a bit confused. "Can I help you?"  No....never again. LOL
Eventually, we found the girls and the Mom and Baby ward. They are allowed two visitors at a time.  The girls stayed in the hallway while Michael and I went in...until JaRissa told us to tell the girls to come in and we'd simply leave if asked to leave. That worked well.
Sometimes you get to hold the answer to your prayers and fasting.

It was about this time the girls came in.....


Larissa is fantastic at taking selfies! The whole gang. 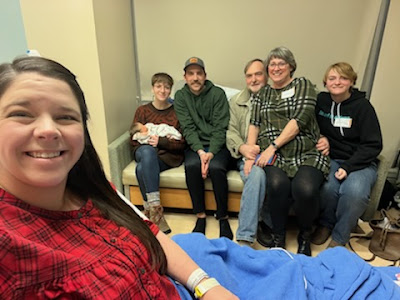 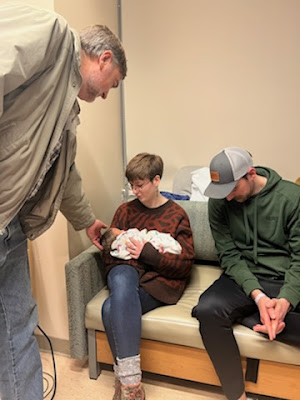 We so loved sharing the joy of this day with Jared and Larissa. We kept the visit fairly short, and I was sure to give Larissa plenty of encouragement to rest. Jared will be on paternity leave and able to be at home with them when they go home.   I'm pretty sure Carrie will be her only Monday visitor.
Welcome to the family, Noah. We are all so excited to get to know you. 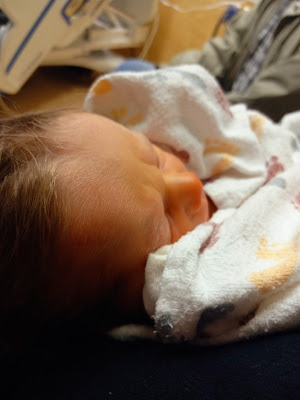 Joyfully Penned by DeEtta @ Courageous Joy at 7:56 AM