My family LOVES English Muffins. Somehow I have gotten out of the habit these past 6 - 9 months of baking bread (and you say Asia Region?) ::snort::.   During this time of buying bread we were picking up about 4 packs of English muffins EVERY time we went to the commissary.  If there is something Zander is going to eat a LOT of - it totally needs to be "real food"....so my baking goals for 2012 are simple. Start baking English muffins again and learn how to make sourdough things as Michael loves sourdough bread, English muffins etc.


I USED to make English Muffins weekly. I used my Uncle Bill's recipe. He uses tuna tins for tins which fit around the dough and he baked them (covered with another pan weighted down with a brick ::snort::). Ah the memories.  They would rise nicely, stay well-shaped and were about "normal" in  all aspects.  I don't HAVE zillions of tuna tins (or cat food tins etc).  I began to see recipes online - everywhere else really - where you cook them on the stove top.


Mom sent me the copy of Uncle Bill's recipe SHE had...I found the one he'd given me. They are different. The original used more flour and less sugar and yeast.  I baked yesterday using the original and the stove top technique for cooking.  I used a cup to cut them out..... 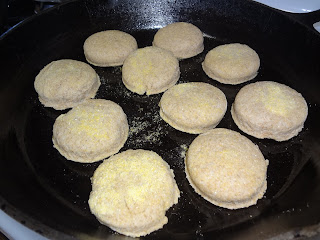 These were good. Must have been o.k. as all but the 4 in the freezer (cuz I didn't think they'd eat them fast enough and they'd go bad) are gone. We did note these were SMALL - the joke is they can be my "diet muffins".... they tend to get lost in the toaster. A comment was made that they were heavy.
I tried this a.m. using Uncle Bill's new recipe....a cup less flour, more milk, sugar and yeast...did not increase the salt. I cut them with the biggest glass in the house.  With less flour, I found them MUCH harder to turn so the perfect shape was distorted....they also didn't rise as high. They toast well - but fall apart...hmmmm....maybe I'll modify the original and use the bigger cup to see if that works...or maybe I'll have to use a lot of tuna this week and go back to baking in tins.....I do like the more rounded look of the one on the left.....but you can see the others are much more the normal size.
In any event our prayer for a forever dog friend in 2012 is answered.


My goal to begin baking English Muffins again is complete....but needs to be maintained...I don't want to do this every a.m. but it appears that is what I have to do to keep up with the family.

Could you use a muffin pan than makes extra large muffins? It might help get them loser to the right shape without ODing on tuna. :D

Yes, I'm trying to freeze but at this point they eat them as fast as I bake them. I may have to do 3 or 4 batches in one day - but I'm lazy and don't want to. LOL

Hmmmm.....I'll have to locate some xtra large muffin pans and see.

Tina - YOU are amazing...I'm pretty good when I'm home...but as soon as school and all my outside ministry starts....hmmm... ::snort::