Wow - it simply snowed and snowed and snowed....and I don't know if we are expected to get more. It snowed so much that my CHILDREN, my DAUGHTER with NERVES OF STEEL, has asked if we can all ride in with Michael to PWOC tomorrow instead of me driving....and MICHAEL has said he'll bring us home after haircuts and go BACK to base to get Nolan after drama rather than have me drive.  I AM a wimp....but this is beyond normal winter driving conditions.  I know BRAVE women who haven't ventured out all weekend.


Today was Day 3 of a 3 day weekend. Day 1 we traveled home from Tokyo. Day 2 was chapel. Day 3 Michael had a MLK service, and some extra drop in appointments before he could get out.


The kids and I, however, played....baked...worked on turning this blog into a book....Good fun!  We aren't sure WHERE this thing came from but a BIG, lit snow plow came by late last night and left a lot of snow at the end of our driveway.....the kids had plans to use it to add to our sledding hill and to build a fortress. 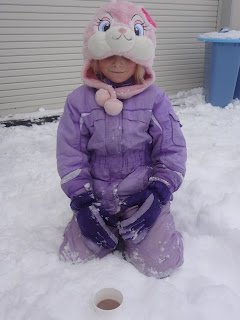 Also on the agenda today was the start up of "routines" involving a healthy life style. I made a great dinner too....and ate just the right amount of it.


I had a 2 hour long ministry skype.


We've had a situation here since we've moved in. A boy who simply likes to manipulate Zander's lack of social skills. The mom has been on my door step drunk and yelling before so really there isn't much that can be done here. We've tried. I was encouraged when he came today and started to taunt Zander. Zander did NOT respond. This is HUGE. Usually Zander either lashes out physcially or breaks down emotionally...neither great responses. I didn't realize this boy was out there. Later I heard that he had come over and begun to say that Zander needed to go somewhere else because he didn't want to play with Zander.  Again - Zander didn't respond (which a few months ago made this boy and his mother mad because Zander won't respond to questions and "deadlines").  The OTHERS my  kids and neighborhood kids told him, "This is Zander's yard. If you don't want to play with him, you can go play somewhere else."  I felt like parenting is hard and I can't find the right balance in the situation...but friends helped me to see that it was GOOD for our kids to speak up and not let someone bully someone who interacts with society in a unique way (OK - already - my alphabet child). I think that's true. What this boy has been doing is not o.k. Zander has fought this battle (with the aide of Mike and I trying to talk with parents and give him pointers) for two years....it was nice for others to come to his aide today.....and we'll keep looking for ways to help Zander process the strange social cues coming his way.

Joyfully Penned by DeEtta @ Courageous Joy at 5:11 AM

While I don't miss the snow of Germany.... my kids do play outside more when there is snow - it gives them something to do. FOr some reason they are at a loss most of the time otherwise... although last night they did get some neighbors together to play Murder in the Dark

We have had very little snow this winter. It has been quite cold the last few days, but I do miss some snow.

How sad for Zander and you and also, really for this boy. Our Dan has similar social problems and he isn't even on the spectrum. We try and help him, but he still either goes into a rage or breaks downs and loses all emotional control. Parenting is hard.

Loving all the snow you have. We haven't had any snow to speak of this winter and are missing it.

So sorry about the boy bully, but I do think it is good that the other kids took up for Zander. You and Mike are doing a wonderful job with all your kids - you are a beacon for so many others (including me!). But, sometimes a Mama's heart just hurts for her children, doesn't it?

I know I replied on FB but wanted to say again that Zander and all the kids did great in this situation. Also seeing the part about his Mother here I have to wonder if this boy is troubled and lashing out at others is part of dealing with his hurt. It seems like the bullies often have a difficult story themselves. Sad all around but your kids did great.