We stopped at the Golden Gate national Cemetery on the way up to Cresent City and visited with my grandfather and grandmother for a few minutes.  It is hard to describe the wash of emotion in these settings.  I had never met G-pa Jack (Roy).  He died before I was born, but the legends of his life carried on years after his death.  G-ma Ann or Granny Annie, as she was known to the grand kids, was an integral part of my growing up years.  There were many occasions we would sit together and look out the picture windows and talk about old times and things.

She told stories of growing up in Texas such as the day they came home from Church to discover a six foot rattlesnake spread out on the dining room table sunning itself.  She talk about her parents - her father, Nathaniel William, was 72 when she was born.  His wife was a good 30 years younger than he.  He was also a veteran of the civil war (the thought of a great grandfather having fought in a war that occurred 150 years ago still amazes me - how many can say that?) and nephew to Jefferson Davis.  She talked about life with G-pa Jack - by all accounts a rough kind of character known for working hard, fishing hard and, unfortunately, drinking hard.  Granny Annie got a call from town saying she better get in quick.  Jack had a shotgun to the back of some guy's head and was walking him up the middle of the street (she managed to diffuse the situation and keep Jack out of jail).  She talked about the flood of 1964 when the river, having been blocked by a log jam up the South Fork when the river was already well above flood stage, finally broke the dam loose sending a wall of water downstream.  The wall of water rose 3 feet up the picture windows we were looking through and subsiding seconds later taking with it 15 feet of property in front of the house as well as many homes, bridges, and roads up and down the river.  Our neighbor's house was suspended about halfway out over the river being held in place by the power lines (which were stretched tight, very tight - she showed me pictures of this). 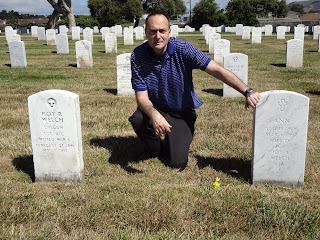 Joyfully Penned by DeEtta @ Courageous Joy at 5:59 AM