We knew it was "right by the train tracks." We drove down to the station and took each road that crossed the tracks. I thought Christie had said there was an apple on the building. I told Arielle I didn't want to resort to knocking on doors and asking for apples.

Finally.....I spotted these as I swerved around a parked truck....looked promising. 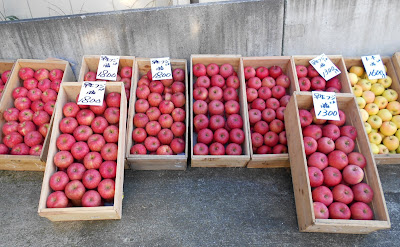 Apples have been expensive at the commissary. $8 - $9 for a small bag with about 6 apples in them.  They've also been dry and leathery. We LIVE in the middle of apple growing country....we parked and walked back. We could see the apple as the other vehicles had left. 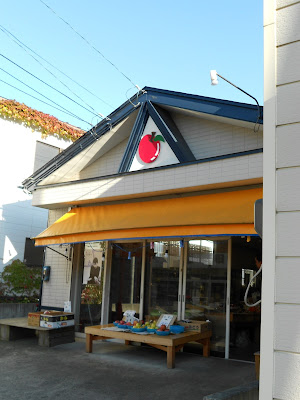 The Apple Man came out with a knife and sliced and diced all sorts for us to try. I picked some really SWEET, CRISP, JUICY ones. I laughed when he wrapped up the apple he'd cut and put it back in our box.

Arielle has missed being able to bite into an apple....we both grabbed one and indulged on the way home. We were smiling big, enjoying our apples, when we looked up and saw a fellow driver watching us and laughing. It made his day to see our delight in the local apples.

I purchased the mid-priced apples....Y1600 ($20.58) and got 56 apples. That's a savings of approximately $43-$61 on this amount of apples.  I'm happy. Maybe you have to live here and know how expensive produce is to appreciate this post. LOL 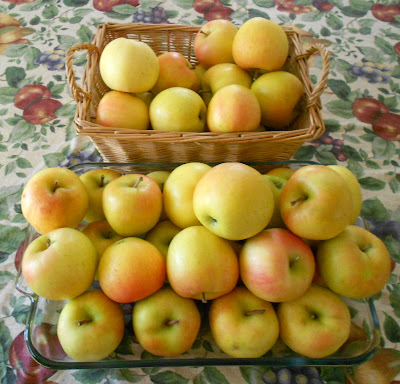 Who says eating healthy in Japan will cost your entire COLA?

Joyfully Penned by DeEtta @ Courageous Joy at 4:01 AM

I don't think $20 for 56 apples is a bad deal at all! Probably close to 40 lbs...I'd go back and buy some more and make and freeze some applesauce or deyhdrate some so you can enjoy the yumminess through the winter... Good find!

I bet you're right, Deja. We've LOVED eating as many as we want today....I love to dip them in Almond butter and then homemade granola....whole apple and snack around 240 calories. LOL

Sis: they do look yummy! I remember that if we wanted something in particular in the PI's we just had to pay and enjoy. Those apples do look good. try making some apple butter also.........that is with cin in it. YUM! love/prayers - mom t.