We decided to have a "no Parkinson/Arthritis allowed" day. The kids weren't interested in doing anything. This suited us well as we love couple time.  Michael has been suggesting for some time we ride over to the housing area parks....and I've been saying it's too far, with too many hills.....

We took off for a ride to the "golf course" and before I knew it we were on the back side of the base looking down at an inviting bridge/river below.....I'll admit I was a pain...but once I caught my breath....we sat at the top, enjoyed the view and being together and I apologized for my attitude. I suggested we head down to the bridge. Michael reminded me this would take us to the "other side" of base and would  involve a ride back UP.....but as I said, I'd adjusted my attitude. Michael told me how to adjust the bike gears for the best climbing gear and that made a world of difference. ::snort::  We headed down to the bridge. 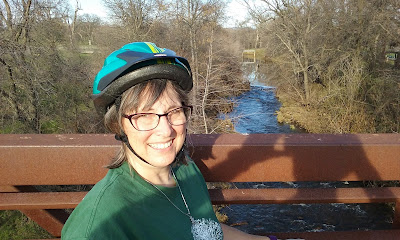 It was a beautiful day so we continued on to the park and walked up the nature trail. By this point I was in search of a BATHROOM. ::snort::  It was a fun walk....up and back.....and I did find an outhouse that I'm quite sure I wasn't supposed to use....  :::shhhhhhh::::

We saw a few young friends on a local playground....and then it was time to retrieve our bikes and start the ride back to fam camp......up, up, up a very long hill and then down, down, down a lot of smallish hills.....it was a lot more fun going down the hills than it was going up them on the way to other side of base.

The main base is nearly deserted on the weekend; we had a lovely ride home and got back just as the sun was starting to set.

It was a wonderful afternoon. Sometimes one just has to "do it," even when you know you'll pay a price for it later.  I love Michael for many reasons - today, I'm impressed he was willing to "push" when he knew he'd pay for it tomorrow. I also love that he forced me to push further than I was comfortable. I'm a timid rider. I tend to fall. ::snort::

* Yes, we did take a selfie, but we'll use it in our anniversary post. LOL


WOW! way to go. By the way you both look absolutely cute and etc. Not sure what the word is for a man but for a lady it is cute. love/prayers - mom t.