Michael (and the boys at times) have been busy with projects on the RV.....They removed the TV that was in front of this cubby. Originally it had a bulky TV. The previous owners replaced it with a flat screen TV....but it stuck out on an arm...and when the printer was added back there it stuck WAY out. I was always bumping my head on it. We're looking for cupboard doors to go here...or I'll hang a curtain eventually.  CoRielle were happy to receive the nice TV. We are down to three TV's. LOL 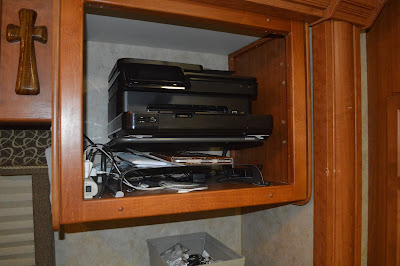 This door is between our room and the bunks. It didn't shut all the way and hung up on the runner. Michael added a drawer runner and now it slides easily and shuts completely. 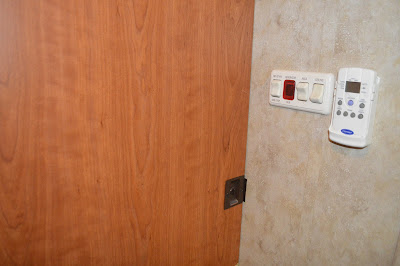 The shower hose was cracking  - we have a new one. 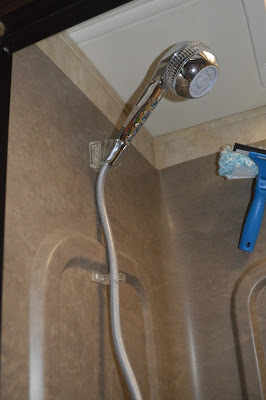 We thought THIS would be an easy fix. The drain was rusting and water was leaking under the sink. Michael bought a new drain and discovered  home drains have overflows, we didn't want one for the RV. He had to order an RV drain and it worked perfectly. 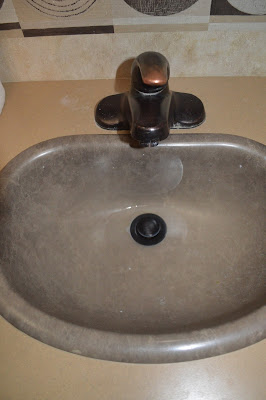 He's replaced various bulbs. We had been moving to LED in the trailer and I miss them...but this is what we'll have for the time being. 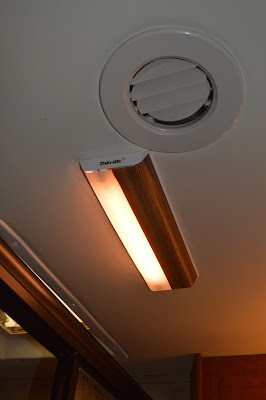 The access plate in the electrical bay was allowing water to spray up into the bay from the road. Michael replaced it - had to cut the hole a bit bigger to fit the new plate, but it's snug and we no longer have water in the electrical bay. He fixed something in the wet bay as well, but I try to ignore that part of the show. 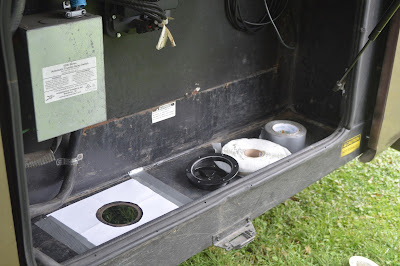 Michael bought a board, painted it and installed it so I have a chalk board and a bit of cork board in the hallway across from the kids' bunks. We use our chalk board to post the week's schedule. This was before we began using it. 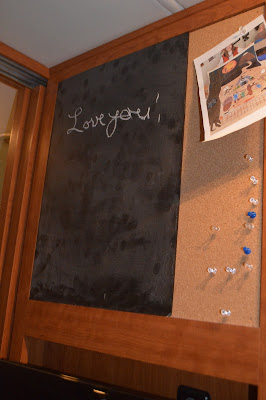 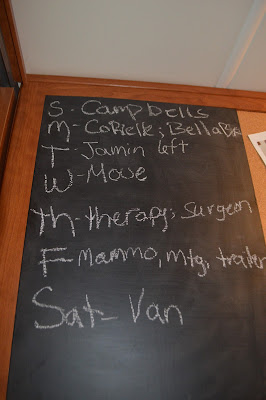 I ordered a wall decal. I measured the spot where it needed to fit - 20 inches at the widest. The decal came and was HUGE. The measurements were in Chinese.....we looked all over for a spot where this would fit and finally put it on the mirrored door. Behind that door are plastic drawers - the kids and I keep clothes in here. It's a good spot to see the verse and be reminded. LOL 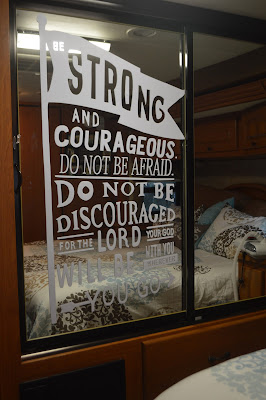 THIS is my favorite project. You can't see, but I have few drawers and so had a plastic drawer that sat on top of the stove top for silverware, it had a basket on top for various odds and ends. I really dislike the mirrors on the walls in  many RVs....Michael took these off. 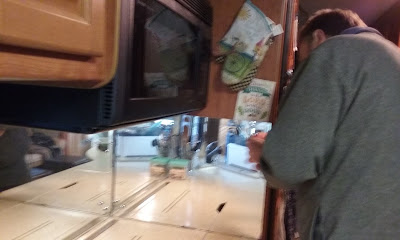 He replaced them with Smart Tiles. I LOVE THE LOOK....but next he put up the little Command Key strips.....and I can HANG the utensils and put the silverware in a  drawer. This looks more like us and I was able to clear all the clutter from the top of the stove. 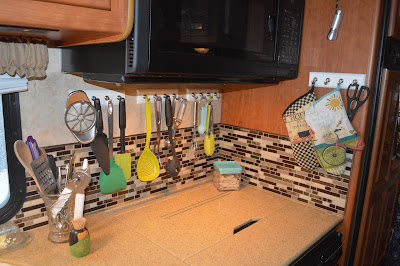 We'll make another video sometime, and we have more to do, but the motor home is feeling like home!  The big project for the next two months we are house-sitting, is to remodel this spot to hold 3 bunks.