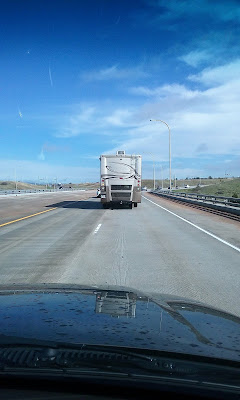 This is the view that began the day.....I followed Michael to Transwest for Uchi to receive a front end alignment. We also hoped the mechanic could track down an persistent rattle in the front end. All is well. They aligned it and told us the rattle is the generator's  muffler.

While they worked on Uchi, we took Nimo and drove over to the Post Office.  They were AMAZING. We were a bit leery as this was a walk-in facility...they have it down to a science....we were in and out - with the passport renewal aps on their way - in an hour. They asked when we were traveling and I told them we'd leave the day after the passports arrived. ::snort::  We paid to get them in 2 - 3 weeks. They said we should have them in 7 - 9 days. I pray it's so.
We knew it would be a short travel day, but Michael was itching to get on the road. We'd really like to be back in OR a couple of days before we fly to Alaska. We hoped to make it at least to ST VRAIN STATE PARK.  I drove off ahead of Michael and Uchi. We took Nimo to Earl and Mary's and picked up Yuuki. We met up down the road and a truck stop and the boys hooked up Nimo to Ucho.

By the time we called it a day, we'd reached the Walmart parking lot in Laramie, WY.  Michael suggested rotisserie chicken and potato salad. I found THIS - it was EXACTLY like the ones we loved in the Japanese bakeries. This prompted us to remember most the bakeries in Japan were "French bakeries."  It was a fun treat, after a long day.

We are coming up on two years of full-timing this summer. This is the FIRST night we tried our hand at Wally-docking or Urbandocking. We've attempted it before, but there were always signs up,  or the managers said no. RV Parky is a great ap to use while traveling. It tells us where nearby campgrounds, RV parks, and urban docking opportunities are. The Walmart in Laramie was marked as one that will let you over-night. We loved it. It was MUCH quieter than a truck stop! Much! There are 5 other RV rigs and about the same of trucks over-nighting. The meal was cheaper and just as tasty. We were able to buy a few things we needed without taking time out of a travel day. We didn't put down the jacks, or push out the slides...this made it possible for Michael to basically get up and turn the key if he couldn't sleep. LOL