We've suspected for a few weeks that Helga was a ROOSTER.  I heard her crow a couple of weeks ago - week and pathetic -  and nothing since.  I've been suspiciously watching "her" comb and wattle grow.


This morning I opened the coop with my customary, "Good morning girls!" 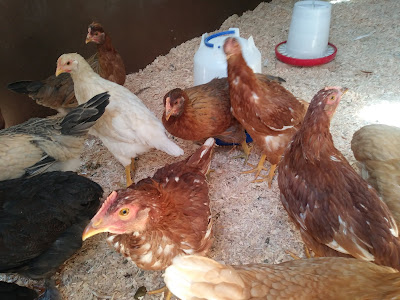 Olga and several others rushed out the door. OLGA looked at me, straightened her neck and CROWED. WHUT?
I ran to get the camera to catch her trick for my Chicken pals. As I came back Helga was letting loose with a volley of crows from inside the coop. No denying it - we have TWO Silkie Roos. I got this breed as the hens are known for being broody. They were supposedly "sexed" from the hatchery.  I thought I may get a roo next year and there would be a hen to hatch some chicks.  Plans change. We named the Silkies Olga (seen in the door below) and Helga as they were the guards of the hen house....now it makes sense.
Lucille Ball wonders what has gotten into Olga and Helga! 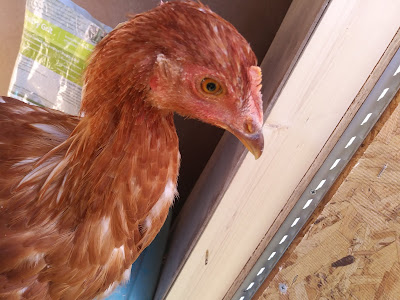 I am wondering about a red who is getting a bigger comb and wattle and is a bit more stand offish than the other reds. We'll know soon if we have three roos. We wanted none - as we have grand kids and they terrify me. However, I am seriously considering keeping one. The others will need to be re-homed. Though others around here have more nefarious plans for them. They'd best quit the 0500 crowing. ::snort::

The day was full of more than Olga's surprise. Have you ever had your Crocs shrink? Mine have. They used to be loose and now my whole foot barely fits in them at all. It's odd. These are my garden/chicken shoes....I've been leaving them out. Do you think the sun effected them? 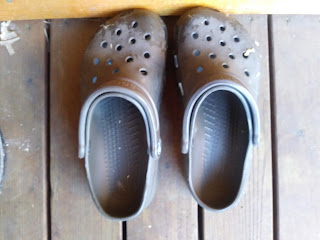 Michael and Alex continue to work on the greenhouse foundation. 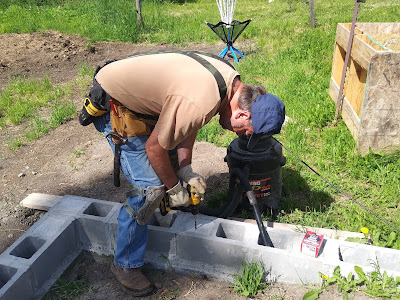 Nolan got all spiffed up (more glimpses on the video) and went for his first job interview. 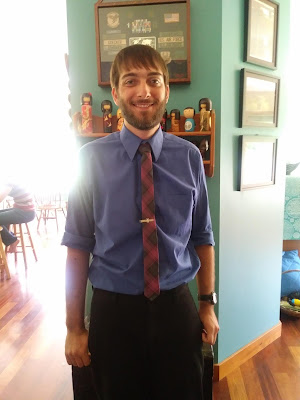 As soon as the boss realized he is 19 and not 30, she offered him a job. He'll take the food handlers test tomorrow and begin on the 4th.

Michael was worn out after dinner. 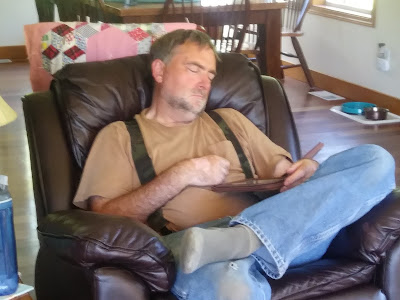 Stacia and I enjoyed playing with Bella and Bubbie (Gideon- Brother) today. Bre and Izaak spend all their free moments working on their new house. Carpet will be laid the 12th. We're all getting excited for them to be able to settle in.


Bella helped me weed the garden and water the berries and trees....
Slim pickings this year in the orchard. LOL 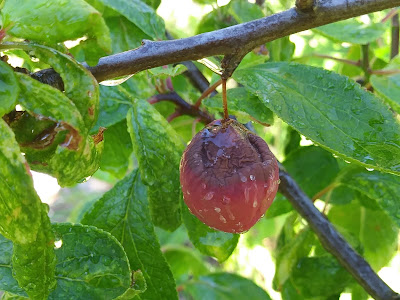 Gideon loves to chase the cotton around the yard. 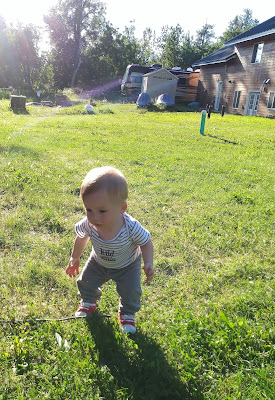 Here is a clip of our Rooster Discovery

*Note - Google had changed how my videos were being uploaded. I've figured out the work around and the clips are better again. Three were bad. I can't fix them.

Joyfully Penned by DeEtta @ Courageous Joy at 9:48 AM

Yes! Crocs do shrink if left in the sun/heat.
Always enjoy reading about your lovely adventures, thank you for sharing them with us.

Marina, thanks for letting me know I am not imagining the problem. I can't think of a way to make them grow again. LOL Lesson learned. I'm glad you enjoy the blog.

Congratulations to Nolan! Is your Cochin Partridge colored? I was trying to notice I think I got a glance of her in one of the videos. Your Easter Eggers are very pretty...you did end up with a colorful flock between them all!