Benny LOVES to be in the middle of whatever project is occupying our attention. He especially likes chores involving water. Here are a few photos from last week.


On another day he helped me fill the chicken's water. 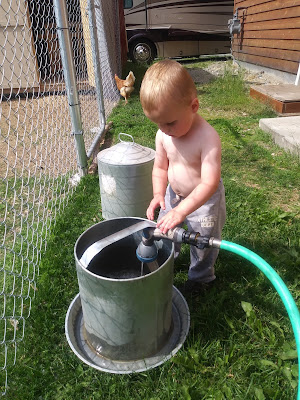 He was doing a great job - until he turned the hose on them.
Benny has spent yesterday and today calling for Papa, Yay-a, and Ax....alas  all went bye-bye. I suggested he come out and help me feed scraps to the chickens tonight. We asked Arielle - she said yes - and off we went.  I should have remembered the chicken incident.


It all started so innocently. Dandelions and Eggs - remember? Our two crops at Wibbly Wobbly Acres. All crops must be watered.  Don't be fooled by the cute innocence.

This was the warning shot.... 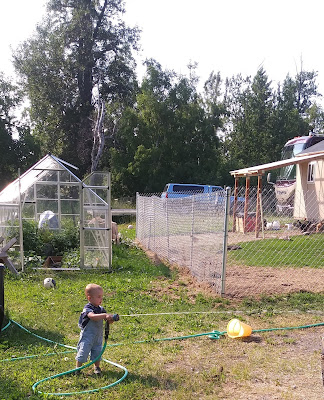 and then all the photos became blurry and water logged as I attempted to escape  the onslaught of Benny-directed watering. He got me good....I was laughing and yelling. Arielle was laughing.  G Dog was yelling and laughing from the window....I was WET.

Benny? He was laughing with glee.  And chattering a mile a minute. In the midst of it all he called me MeMa (Memaw?). I have no idea if it will stick - but I liked the sound of it coming from a little grandblessing.

I told Arielle to help me....she said he'd get her if she helped. ::snort:: I told her to turn the water off. ::snort::  Look at the determination on that face! 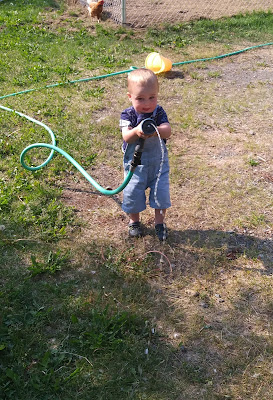 I hope it's the first of many water fights to come.

How adorable! The best decision we made was when we moved onto the family property when our boys were young. I love that they grew up not only with their grandparents but with their great-grandparents too. Multi-generational living is awesome.