I woke early and took Alex to work.

We had no idea HOW to hatch chicks...but we have a hen who was adamant she WAS going to set eggs...so we moved her to an isolated cage and left her alone. TODAY....we heard peeps.... 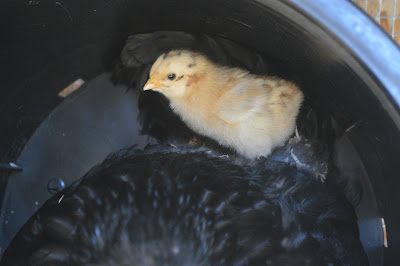 We'll give her another few days...she still has a collection of eggs she doesn't plan on leaving....she kicked one egg out last week...this one hatched....we figure she knows how to take care of it....and we'll divide the chicken yard soon and let her and the chick(s) have their own section. 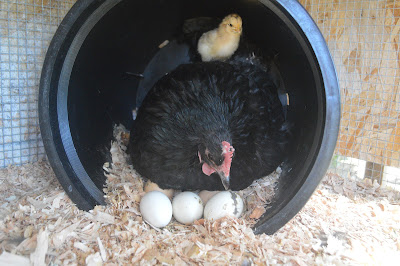 There's nothing to see here - just move along. LOL  Why, yes, I did give her a planter to nest in - it worked. 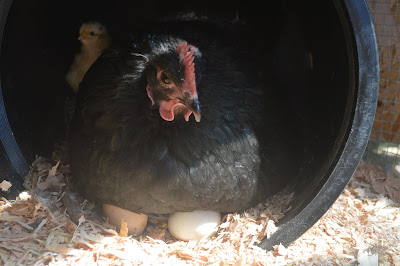 I got called to pick Alex up early. He wasn't sick....but one near and dear to us is being tested and it appears we may be heading for quarantine again depending on the results. Enough said?  Michael had picked up some "bwananas" for Benny. I decided to swing by and drop them off as I was going out anyway to get Alex. Stacia and Millie came along.

Benny ran to the car, Stacia opened the door, and he was so excited! "You have a dawwwg!" 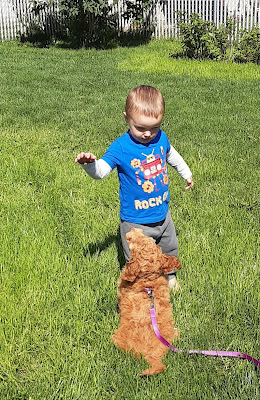 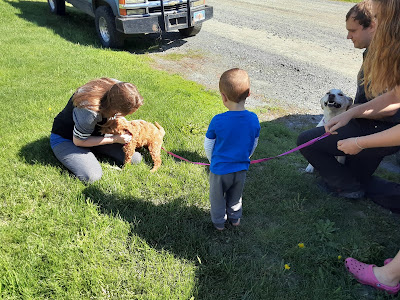 In honor of Lori (the mother hen) we decided to do a job we've been trying to get to....we cleaned out the coop....and Michael added a ledge to the front of the nesting boxes to keep the shavings (and eggs) IN the box.... 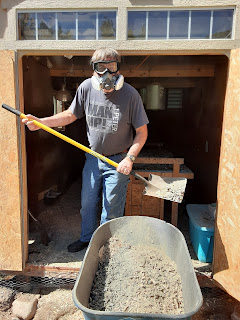 This year's lasagna bed needed a brown layer - it got it. I added a bit of lime to the top and watered it all in. Not to fear - nothing will be planted in this bed for at least a year so the chicken litter is fine. 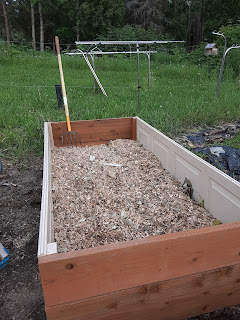 I put in an online order with Walmart. Am I the only one noticing prices have gone up? No yeast and some of our vegetable requests were out...but everything else was pretty good. I enjoyed a visit with Nolan as we went to pick up. Stacia made dinner. These young adults bless us. 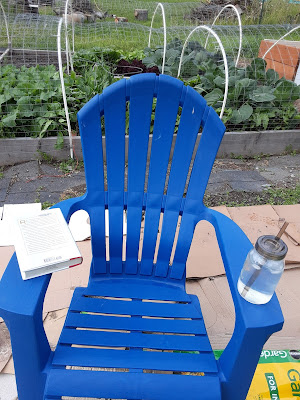 I think these potatoes are going to need way more dirt....we're thinking we'll fill in the trenches...maybe. Do you grow potatoes? We usually make hills but we planted 160 starts this year...and I saw this method on YouTube....they promised a follow video on how to "hill" them....but they haven't made it....and I need to know. LOL 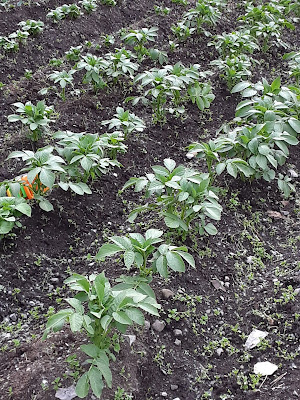 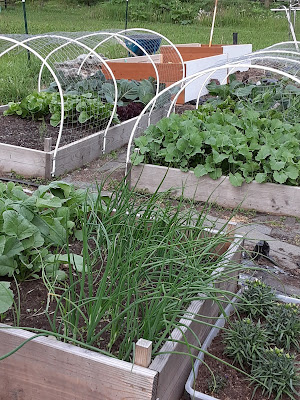 Standing at one end...the garden goes beyond the bush in the middle....there are 6 rows of corn behind the make shift green house....which covers two new beds. The potatoes are too the left - along with a row of broccoli, cauliflower and dill. The black pastic covers ground that is ROCKY and CLAY LIKE and grows nothing well but chickweed. I covered it with plastic and tried various squash here....and the tires were given to us by the place which replaced the RV tire. I planted flowers in them and they hold the plastic and cardboard in place - weed blockers! The two hoopy beds are doing well...and the beans in the boxes of the previous greenhouse have not been found by the moose! 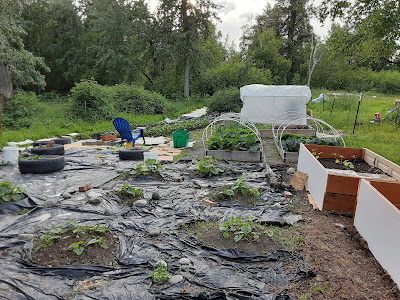 I thought this plant was dying - but it appears to be about ready to put forth some new effort....I am growing two hills of spaghetti squash and would love to actually GET SOME SQUASH. 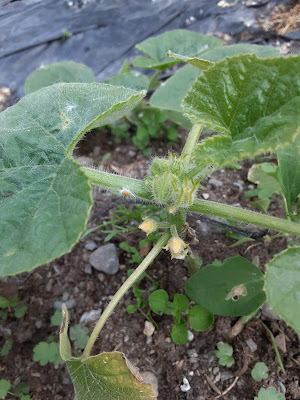 I got lured into weeding and then realized it was 10 p.m. and if I wanted to blog, I needed to LEAVE THE GARDEN!

I'm sad to miss church tomorrow - but we'll slide back into our old norms....and that will be nice too. Leisurely....