I should have KNOWN to expect a let down after the excitement was over and everyone was gone!

While Nate and Heather were here it became apparent Dad CAN walk further than he wanted me to know! ::snort::  Dad was having a hard day today. He was sad, but he was also oppositional. I decided a good dose of Vitamin D was called for. We walked until he told me he had to stop....and then I told him, "Heather said you walked almost to the corner. Nate said you should try to walk a bit further every day. Don't you think you can make it to the corner?"  He did - and then had a good long sit before we started back home. All together it was .4 of a mile. Though he looks grumpy with me, I think the walk did us both good. 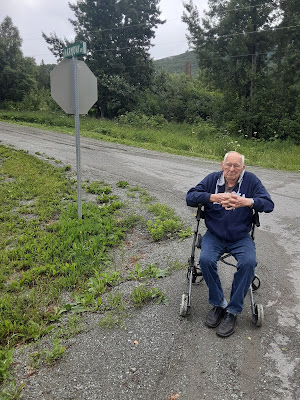 I put things back together after weeks of guests. We were both a bit lonely. Stacia and Allie enjoyed down days and caught up on cleaning their room.  The boys worked. Michael had his own appointments.
I took Dad to Physical Therapy in the afternoon.  They saw how "ornery" he can be, but they got him to work.  The focus is NOT on him walking without the walker, the focus is on him being able to USE the walker WITHOUT falling. He is sure he doesn't need the walker. Before surgery, we were content to let him take the risks...he fell 3 - 4x a week. He fell down stairs, in the garden, on the asphalt....had gashes on his head at most times...visited the urgent care several times....and they all told him to use a walker...and he wouldn't. After surgery, he's on blood thinners. We are no longer willing to take the risk of  bleeding out etc. The docs feel the risk far outweighs the benefits and the fact  he continues to fall WITH the walker only confirms their opinion. We explained  we understand everyone dies once...and if he were living alone he could make that choice, I suppose...but since he lives here, we don't our kids traumatized, spending a lifetime thinking, "If I'd watched closer GG wouldn't have been walking without his walker, wouldn't have fallen and died." If you are one of his friends, please do NOT tell him to "Show faith and walk." It's not helpful. The last time he heard this we spent 8 hours in the ER and he bled for 17 hours. 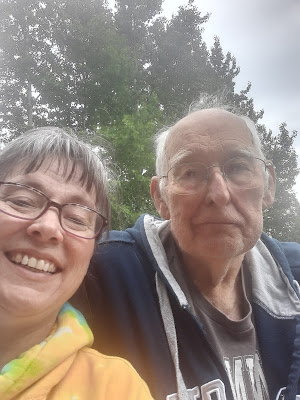 ANYWAY - by the time we got to dinner I was fairly well "done." Dad continued to be grumpy. I was happy to take the girls to youth group. I had books and planned to hide for a couple of hours. I thought I'd find my equilibrium and return cheery once again. I was worn out.
Krista, another youth mom, hopped in my car and we talked for nearly 2 hours. I went home and got 9 hours of sleep....I woke up Thursday a.m. feeling like a new person. It just goes to show what we THINK we need may not be what we actually need. Dad woke up on Thursday in a better frame of mind too. It made his day when I told him he didn't have to go to PT every day.