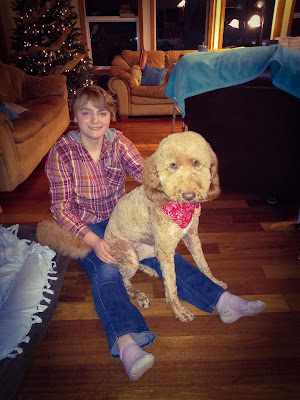 Millie spent a few hours at the groomers today! Oy Vey! I LOVE her dread locks. I like her longer, curly hair...but we HAVE noticed she simply behaves better when she's cut shorter. She was due for grooming. We had hoped not to go THIS short again...but her hair was one big matte. Literally. They kept it to show us, and it looked like one big bearskin run.

New this time is her tail. I'll have to get a better picture. It looks like she has a duster on the end of her tail...and they left her face long rather than trimming it short like a puddle. I guess this is the classic labradoodle look.

We were able to talk to the owner/groomer today.  We HAVE been washing her and brushing her....turns out that giving her a bath probably makes her hair matte more - unless we blow her out. Which we haven't.