An Unexpected Day at Home

I woke up with a migraine. It took me a bit of time to figure out what was going on. First, I noticed I was nauseated, and my eyes were crossing. Eventually I realized my headache wasn't going away. I took some Naproxen, and it didn't go away. I took some Tylenol, and it didn't go away.  Michael wasn't going to be able to help as he needed to be in Anchorage.

About this time the groomer texted to let me know they were still closed due to our storm. Next was the audiologist. Suddenly, the day cleared. Grandpa took a nap and I nabbed his chair. I spent most the day on the couch.

Allie over-did things a bit yesterday. She was content to stay on the couch with ice.
Stacia eventually decided she was going to go play in the kitchen. I've shared Krista and Bre made amazing cocoa bombs for all of us this year. Jamin hadn't heard about this phenomenon and didn't catch the instructions. He shared on New Year's Eve that he took a bite into one and nearly choked as all the powder exploded in his mouth and throat. I believe Stacia was inspired to create a bomb that would be safely edible by Jamin's story. She set out to make a cake bomb. 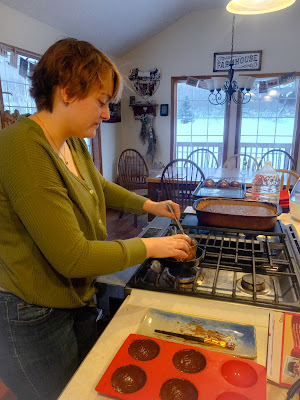 It doesn't take long for things to come back to baking for Stacia. She baked a chocolate cake. Added to it to make it the consistency of cake pops or truffles. Melted chocolate and made molds. 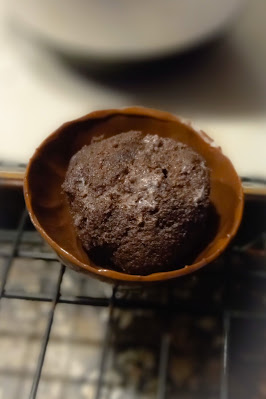 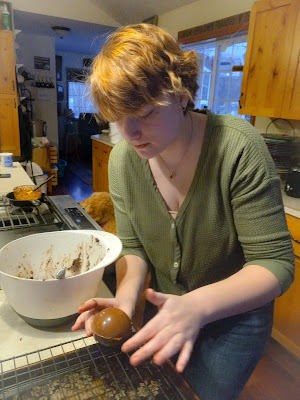 She topped the whole thig with another shell and wa'la a cake bomb. I've not tried one but those who shared one liked them. I would say they are far too rich and big for one person to eat them in one setting. Maybe a smaller mold...she may be on to something. 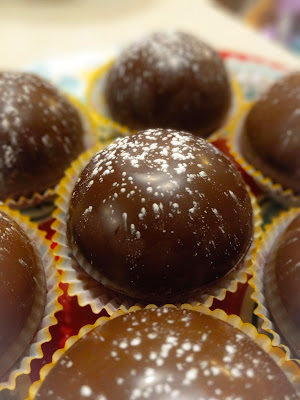 It became apparent I was not going to cook what was on the menu. Allie suggested I stay on the couch and she and Stacia would make dinner. They began to talk about go to meals (divan, pot pie and stroganoff) while I shared what was in the pantry.  Allie had told us she didn't prefer stroganoff when she moved in. We haven't had it in eleven months.  We have moose meat. I thought it would work well with the stroganoff seasonings. We also had some yogurt to use up....I had a migraine and didn't remember it was one of two things Allie had told us she didn't prefer.  ::snort:: You SEE where this going? Allie ended up making stroganoff  with Stacia for dinner...she cooked... 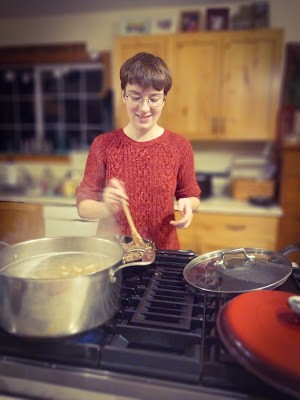 Stacia measured and gave her seasonings and together it turned into a tasty pot of stroganoff.  Allie was surprised how much she liked it. I guess it is going back on the menu. Nolan still doesn't like it or Salmon, but we'll try for the meals on the 5 nights of the week he isn't home. LOL NOTE - neither Nolan nor Allie requested I NOT make specific dinners; I just try to prepare food people want to eat. ::snort:: 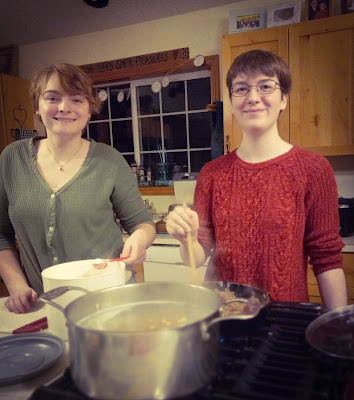 By evening Allie was feeling better, my migraine was down to a dull roar, Nolan had finished the reading for two college classes, Alex was ready for a gaming break and Grandpa had slept the day away, so he was ready to be up. We enjoyed dinner.
Michael got home LATE. He hunted down a few things I have been planning to get which we haven't found in the valley....a calendar with BIG squares, my Bare Minerals foundation and a specific gift for one of the "kids."  I had planned to take care of these on our thrice postponed shopping trip in Anchorage with Krista.  We sure appreciate the time he took to hunt the items down.
We ended the evening watching the end of Season 3 of Lost in Space. I'm sad it's over.

Joyfully Penned by DeEtta @ Courageous Joy at 9:37 AM