How much snow did we get? The weather service insists it was 12 - 15 inches in our area.  THIS was AFTER the 2 feet of snow that was dumped on Tues/Wed which we had just dug out of...two more storms are forecasted for later this week...one is expected to drop 2 - 5 inches and the other "may be another large storm."  They say it's a "rare occurrence" due to an "atmospheric river" 500 miles wide and 2000 miles long which came over from Hawaii and merged with the storm front...lots of moisture.

It is enough snow the schools were closed down for the 4th day in a row (this doesn't happen up here), Alaska Waste didn't pick up, Alaska Daily News didn't deliver, McDonald's stayed closed (because many couldn't leave their driveways) and we have no idea if the mail was delivered because our mailbox is 1/2 a mile away and we didn't care to drive or walk today. LOL

I KNOW Michael was SO relieved to have both boys home today to help with the snow. We have snow shovels and a little plow on our riding lawn mower. It took them 4 hours to clear the driveway and a few walks.

I think if we are going to continue to live out here, we need to consider finding a used 4 x 4 and attach a plow.   Michael pointed out the areas where he is dumping snow this year and they got to work.

First, Michael had to retrieve his shovels...and we are properly chastised...though it was funny to watch Michael sink in the snow for once. In family lore, *I* am the one that always sinks to my waist in snow.  It turns out I left a shovel on the deck for easy shoveling (at least for me) and Stacia left one out by the sledding hill she was trying to build before the plague hit her. Unfortunately, it is across the yard....
Millie was EXCITED to have someone outside to play with. Watching her run in the snow is Hilarious! 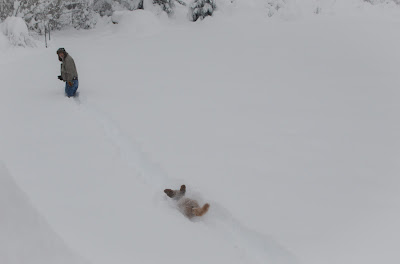 She caught up with Michael and tried to break trail. She quickly realized it was better to let Michael break the trail. 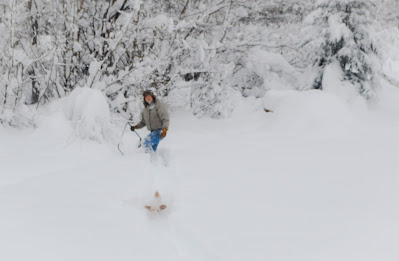 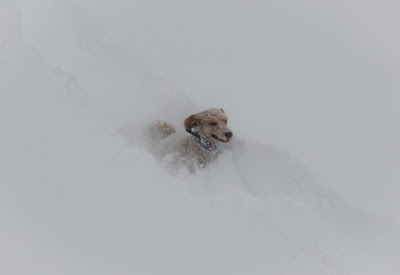 At this point of the day, we could tell we had at least 12 inches of new snow. There is just over 25 inches of snow on our deck railing. 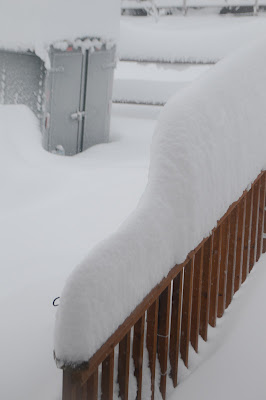 Allie and Stacia worked on school today. They sound like they have really bad colds and are tired, but they are improving.

It was the BEST call not to travel today. In fact, many flights are delayed or canceled out of Anchorage today. We may not have even been able to make it.

Stacia also made cookies so there would be yummies when the guys came in. A new batch of kombucha was ready...this one is pomegranate/apple. I like this much better, but it seems others like more flavor. 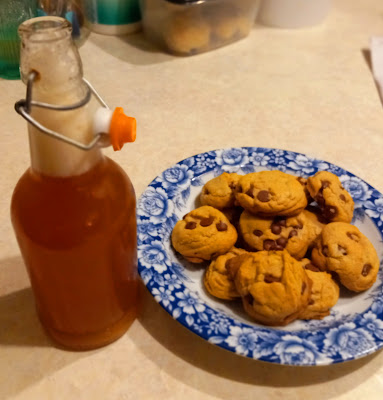 It was the perfect night to make a couple of quiches for dinner. Ye old ham and cheddar and one with asparagus, spinach, tomatoes, ham and mozzarella. Both were good. 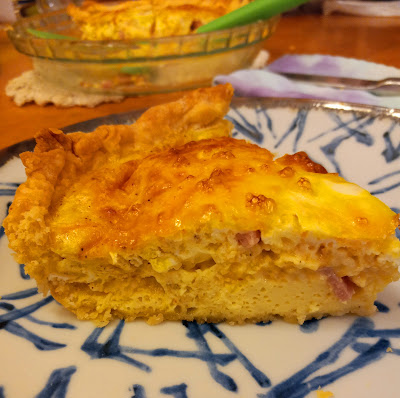 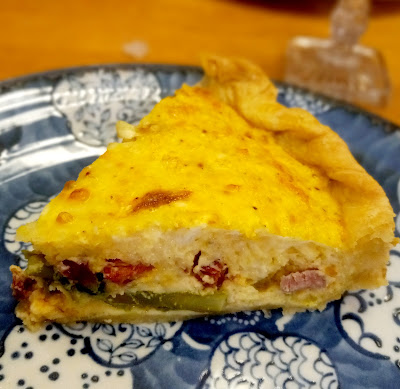 *Note all three plates pictured here are from Japan. I just began using them. I told Stacia this is proof I believe she is actually going to move to Japan. I've begun using the plates because I know I can replace them if need be. LOL
The girls built a fire and kept it going so the house was toasty. After dinner we all gathered in the living room and watched Encanto.  The boys are sure they'll be at work tomorrow and headed off to bed. The girls watched the snow for a bit and did the same thing. 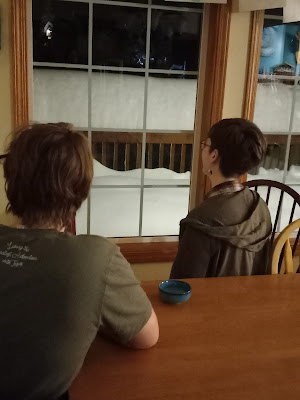