Back Story or I didn't see THAT coming

"...we went through fire and water yet you brought us unto a place of abundance." Ps 67:12 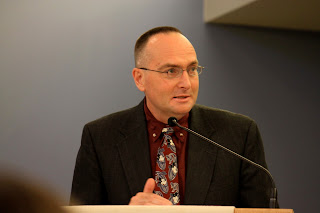 After Michael's surgery we noted his heart rate was dipping. Over time it was noted  it wasn't a "dip" but was staying low. It is usually 65-70 (which is great). After surgery it was 50 - 60....and then began dipping to 45.  Our wonderful surgeon referred him to the base internist. She was "comfortable to say he was in excellent shape," because Michael has no family heart history, is at perfect weight, works out, has low blood pressure and low cholesterol.  He noticed he is getting tired all the time and was becoming short of breath walking up stairs etc.  (Note he STILL showed up and ran the base's "fun run" during this time.)  I wasn't at peace to simply say, "ah - low heart rate is nothing." Michael pushed and the doctor said she'd refer him to an off-base cardiologist for an ECG.


Weeks went by. Michael began to think maybe he should let this drop. Reality told us he was getting more and more tired and winded and was not in the shape of a marathon runner (Jamin's heart rate at 100 miles of running a week and 21 yo, is 50).  The referral came. He was to get an ECG at the off-base cardiologist while I was in Korea.


He almost cancelled the appointment as he didn't want to be a whiner and really doesn't have the symptoms for heart disease. He said he decided he may as well go and rule out any serious issues (was he possibly envisioning my reaction when I got home from W.I.L.D. and found out he'd cancelled the appointment???).  ::snort:: He says he really wasn't. ::grin::


He had the test. It takes WEEKS to hear on military test results.

You all know his father passed away on 17 June.   I was in Tokyo preparing for W.I.L.D. Japan when I received news.  On the 22nd - as women were arriving in Tokyo for W.I.L.D.  registration - I received a call from his doctor. She was trying to locate Michael to discuss his test results. I knew at that moment this was probably not an "all clear" call....it was weeks too early for that. ::snort:: I told her Michael and the children were flying to his father's funeral the next day. She asked what states we'd be in. I told her CA and CO and she said, "Those are good states." I knew something was up. I gave her more ideas of contacting Michael....and prayed....and as Michael says "set myself to be faithful."

Jared received a call and hopped on his bike and went to find Michael. Michael went to the clinic and the front desk handed him lab reports. He asked if the doc wanted to see him and they said no. He was sitting in the parking lot reading the report when the doc called and asked if he were going to come in to see her. ::snort::  He went back in and they talked. She said if he weren't going to a funeral, she'd send him to Tripper for a repeat of the tests. She doesn't trust the test results and maintained he was most likely just fine as he "doesn't have classic symptoms".  She talked about him seeing a cardiologist while he was in the states or waiting and going to Trippler when he returned.

The cardiologist in Hachinohe gave a dx of supected ischemic heart disease and said Michael's left ventricle was enlarged and the front wall was thinning showing decreased muscle movement. Something is not working with the blood flow.  So we have two dx "superb shape" and/or  "beware of dropping dead at any moment". We figure the truth may be in the middle....though we're praying and hoping for the first.

I got this news 5 min before I spoke on simplicity and conducted three W.I.L.D. workshops. God's grace is sure and strong.  We met up at the airport and headed to the states.

We left Japan reeling from the death in the family and this news out of nowhere. They've been telling me for 8 years to get my lifestyle under control as heart attacks are the silent killer....but I have the markers. I'm fine.

We discovered the various Tricare regions have different procedures and were not playing nice with each other. We thought we'd probably have to just wait and have Michael go to Trippler when we got home - but we really don't like that idea as we no longer have an 18 yo at home to watch younger children...and we don't want him to go alone as often at Trippler they simply operate when you show up.  We asked all to pray.

The doc from Misawa has recently emailed that she wants Michael seen BEFORE we return to Japan so he doesn't have an "urgent or emergent incident" in Misawa, or on the plane, where they cannot give him the treatment he needs. This was a surprise as last we knew she was content to believe the results were bogus.  We are currently trying to find a cardiologist in Eugene/Springfield which takes Tricare and will see Michael on 9 July.....or looking at a wait and referral to a cardiologist at Travis AFB.  Things are complicated as Michael will be AWOL if we don't get on the airplane on 10 July.  We are praying for the paperwork to arrive changing his status from leisure leave to medical tdy.

Michael has moved from the picture of fitness, never had an IV or hospital stay for 50 years...to a battery of tests, emergency surgery, nearly dying and now THIS in 8 months. I keep quoting his famous pastor line to him, "It's better than the alternative."  He doesn't seem to appreciate it.

We want to go home. We want life to sometime be normal....but we trust God knows what he is doing in our lives. We are praying only His will. Honestly, we've been looking to ministry plans after retirement, retirement from the USAF in 3 years. If Michael does have a heart condition this may change all those ministry plans as well. (Hard to live in the jungles if you have a heart condition, hard to find a sponsoring mission with this sort of known health condition).


We covet your prayers as we walk this out.

Praying.... for Mike's health, for paperwork to come through to stay stateside for additional testing, for good test results... and of course for peace of mind...

Ditto to what Renee said. Praying for your family. {{hugs}}

We pray for your family often, but will do so daily now...for Mike's health, for clear direction of treatment and whatnot and for all the medical people and agencies to get line with what needs to be done and always for peace and comfort as you wait.

Praying for your family!

God's grace has kept you safe this far and He will keep you there. We always want to know what the future holds but He holds it so just trust and I know you know that so just praying all is well.

SIS: Mike/DeEtta we are praying tons. We are believing that the correct doctor will appear and accept Tricare. Praying first for healing, praying you all have peace in your minds/hearts etc. Praying for orders so Mike can slow down and take time to be seen with some stress relieved. Praying for everything AND KNOWING it really is in God's hands BUT HE tells us to be faithful in praying and so we are praying tons. Just want to hold my 2 G's kids and their kids clost and hug long and hard. Mike I won't hug you hard like before. God Bless. So glad your two Eugene girls are with you. love/prayers - dad/mom t.

De'Etta, I most sincerely pray that all paperwork comes through and you do not have to travel back to Japan before he can be seen. If there is a problem, please ask the professionals to check for sarcoidosis of the heart. We have been through this with my son who had a ventricular problem. The specialists at Brigham-Women's Hospital in Boston are the very best in the world. I hope I haven't given you TMI, but my son exhibited many of the same symptoms as Michael. If you need more information, please message me on FB. I will continue to pray for all of you!

Praying for Mike and you and each step in this.

Praying for you during this time.

My prayers are with you also. God be with you both. Thank you for sharing what's going on so we can pray.