This is yummy. The recipe was originally found at Mouthwatering Vegan. Her pictures are spectacular, for more detailed instructions go visit her. Also - I changed out some spices and you may like hers better! This is how I made it...Arielle and I loved it. Michael said it was good.
Ingredients:
2 T of olive oil (use up to 2 T more if you need it)
6 large mushrooms, chopped well
4 cloves of garlic, minced
Medium onion, chopped fine
3 T tomato paste
1 tsp curry powder
1/2 - 1 tsp fennel
1/2 tsp onion powder
salt to taste (don't skip)

2 C of cooked lentils (or 15 oz of canned)
2 C COOKED spinach (takes a LOT of spinach), roughly chopped
6 sun-dried tomatoes (I didn't have)
1/4 C water
Splashes of lemon or lime juice to taste

Vegan milk to brush on top

Original recipe called to cover and simmer. Mine didn't look like it needed to simmer so I skipped. 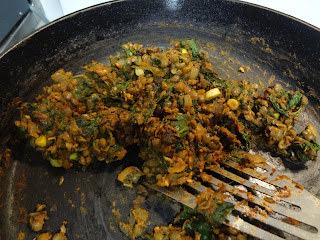 Roll out dough to 10x7. I figure I did THIS WAY bigger as ours were so long they had to be cut in half and they were skinner than hers...but it tasted fantastic. 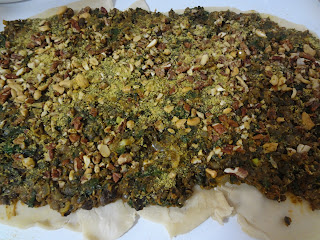 Spoon lukewarm lentil mixture onto the dough. She suggests vegan cheese. I don't do vegan cheese. I opted to add extra nuts on top of the mixture - sprinkle both on. Save some to press into the ends of loaves before you cook.

Sprinkle a tablespoon of nutritional yeast on top of the nuts. You won't miss the cheese - I promise.

Roll away from you into a log. Get help to move it to a greased pan 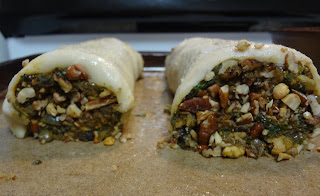 Bake until it turns golden. Recipe said 20 min. but it took mine much longer. So long, in fact that I turned the broiler on and left it too long. LOL 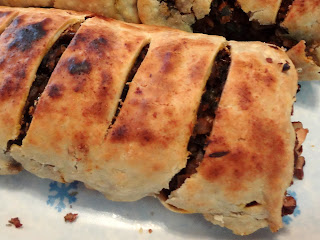 Joyfully Penned by DeEtta @ Courageous Joy at 12:43 AM