Our goal today was to pack the trailer - without the boys.💪 We had stored three years of school books with Mom and Dad when we began RVing. This allowed us to stop in and swap books every few months. It also allowed us to stay out more than one year without worrying about buying school books. 📚

We gave our elliptical to Mom a few years ago when we downsized. She gave it back today. We sure need it. 😋 We also had toys, collections,  and such the kids couldn't part with 2 years ago; that they eventually realized they didn't need in the RV....and some stuff for Arielle and Krista in the attic....we quickly realized we'd be able to get it all in and have space..... We called BreZaak and CoRielle to let them know we could take a few  things for them, if they had anything ready to go.

We found six of these suitcases from our days of international travel.....EVERY BODY KNOWS you CANNOT put six big suitcases into a trailer empty. They wouldn't stack inside each other and we'd already used all our stuffing sort of things repacking school tubs.....Mom took three of them and filled them with things she wanted to have us take up. It will be like Christmas to unpack  and see what ended up in Alaska.

Mom was worn out from packing - when I realized we could send the suitcases to one of the kids and have them pack clothes or such for us to take. BreZaak seemed the perfect choice as we know they'll have clothes Bella has outgrown, or clothes for Gideon to grow into, that can go now.

And THEN, we remembered the electric piano we had purchased in Japan!!!! I'm not sure how it slipped our minds. BreZaak have been storing it. Dad and Michael went across to retrieve it. We doubt their BBQ will fit in now.....we decided it would be a good time to call it a night - I didn't want to go up in the attic again for the furniture from the girls (coffee tables and end tables), Michael is at the point where he needs all the furniture so he can carefully pack the remaining space.  Lots of room left...but lots of bulks furniture left....an antique settee set from Mom, an elliptical, coffee tables, end tables (given to the girls from Mom G), Arielle's dresser (purchased in Japan), the piano.... 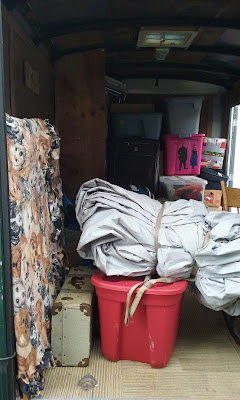 We took a packing break to drive Lorri to the train station. She'll visit family in WA and then head on to Palm Springs - a birthday trip from her sister! It was odd saying goodbye, knowing we won't be here when she gets back.

I teared up having ice cream with Mom and Dad and just us three.  I realized it's most likely the last time we'll have ice cream together - you know that "weekly treat" - while we are here.

Michael suggested we play one round of Farkle. It was much quieter and quicker without the boys and Lorri here. Stacia won!